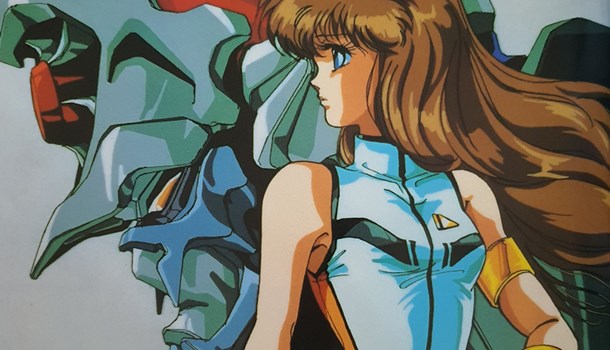 Dangaioh is a tale about four young psychic warriors who've had their memories erased, fighting against the tyrannical Captain Garimoth. It's very much a 'team anime' featuring giant robots, daft costumes and big hair - but the designs are sharp and colourful, the action scenes solidly directed and the music suitably cheesy.

The stories are fairly run of the mill I suppose, with the usual bigger and meaner adversaries cropping up to fight the team who then end up regretting their actions before being destroyed by an assortment of Dangaioh attacks. Some of the baddies are actually more sympathetic than the heroes to be honest, but then the best films have great bad guys - usually those that star Alan Rickman actually, but I digress... ("I'll get you John Maclane...")

This anime usually receives mixed reactions, but I love it. Maybe I haven't seen enough of the formula to be bored by it yet, but I always find it strangely entertaining, even if there are parts which step into cheesy territory. There's just something undeniably fun about a group of attractive teens in a giant robot tearing up the galaxy, although I do wish they'd create a realistic one where the teenagers go picking up girls in their state of the art mecha. But I'm digressing again...

Dangaioh's strength lies in the villains - the somewhat evil Gil-Berg is a right badass, and not since Largo's callous slaughters in BubbleGum Crisis have I sat fuming at a characters despicable actions - which is, of course, utterly wonderful!

Spoilt only by the pointless cutting of episode 1 and a cruel cliffhanger at the end, this is 90 minutes of solid entertainment. I won't hear a word said against it ^.^