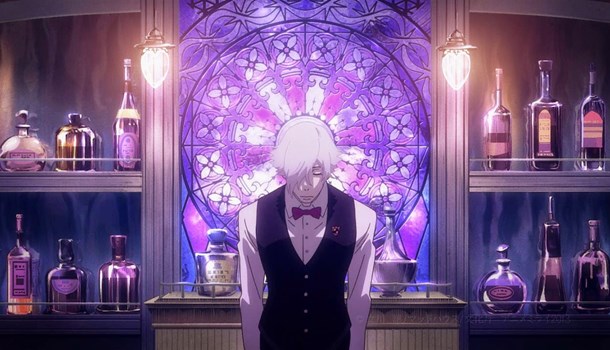 Don’t ask me what synopsis or review it was that made me think that Death Parade was going to be an intriguing series, because within the first ten minutes I wanted to scoop out the inside of my skull. Could any premise be more banal than apparently yet another series where two people seem to be pitted against each other to see who lives or dies? Moreso when the first couple, and couple they are, seem two of the most snivelling and loathsome individuals you’re ever likely to find anywhere in any medium, so you couldn’t care less if they live, die, are flattened by a steamroller or just suddenly spontaneously combust?

Assuming all is as the narrative seems.

Our introduction to Death Parade is a glossy bar, Quindecim, where Decim, an Arbiter, tells our amnesiac loathsome couple the rules, implying death is on the cards. Unable to escape Quindecim, play a game they must (in this instance darts), which will show their true colours. This is immediately one of the most anodyne, if not downright asinine introductions to an anime I’ve seen in ages. Visually it’s all very nicely designed but it’s all such a tedious cliché and the "here-are-the-rules nonsense" is plain tiresome. If I hadn't been watching the blu-ray and my brain didn’t feel capable of much (I’d just watched El Topo so I needed something less acid-tinged), I’d have turned it off after the first episode, if I could have managed even that far. Then, as the episode attempts to draw-out the couple's history, emotional states and possible fidelity or lack thereof, it all felt so by the numbers I wondered if an alpha version of a narrative-writing computer programme had not spat out the script or the story concept. Or both. Woe betide this viewer.

Then the second episode looked to address this, introducing the viewer to the world beyond the Aribters, including Nona – Decim's boss – and a nameless dark-haired woman whose view on the loathsome couple’s relationship is different from Decim’s. Hey-ho, one or the other had already been consigned to the void so it was too late but immediately here there was hope: the potential for the series to become more complex, and, more intriguingly for me, to peel back layers of the onion to see how this after-death place really works. That to me seemed a genuinely intriguing premise, but what seemed unclear would be whether it would commit to it, or else would just continue introduce characters to be tested and their future (or lack of) determined.

Replete with renewed expectation imagine my disappointment that though we are introduced to the occasional backroom character, like Clavis the lift attendant, the more pugilistic Arbiter Ginti – who also seems to have it in for Decim - the reality was just another set individuals to come one after the other for arbitration, most of whom have little to recommend them in terms of story or character. Yes, there is some attempt to add depth but mainly it’s in their backstories and I felt none of the characters were given the time to develop, so to allow us to emotionally invest ourselves in them; that and the writing wasn’t original enough to get anything out of these situations. Many of the situations had potential emotional power, such as the actor who has suffered domestic abuse but managed to struggle to success, but because it’s all so fleeting it’s hard to really become involved at all.

So by the midpoint of the twelve-episode series there was little more than the original premise to really grip me (and obviously it didn’t), except that Death Parade suggests that there is something different about the dark-haired woman who is paired with Decim, and there’s something about Decim that Nona is hiding from her superiors. And what could come of this? Again, I felt some renewed optimism. Could this lead to something intriguing, because though the anime is a few years old (2015), you have to say the animation from Madhouse feels a bit underwhelming. Curiously others seemed more taken with the animation (and the series) than I was, but it seemed all very under-baked to me; Decim’s character design seemed a lift and shift from Ginko’s in the sublime Mushi-shi. I liked the designs in general, and there were some pleasing touches, such as the pool table at which Nona bashes around planets not balls, but otherwise, it seemed very so-so.

For me, the whole concept of putting two amnesiac people together, unburdened by memory until it starts to re-emerge by making them play a game – the game often causing them physical pain - is just not an intriguing one. If anything, the whole framing device is tedious in its repetitiveness, draining all the life out of the series. Most importantly, Death Parade as a series wholly lacked the capacity to draw me into the characters, whether it be the arbiters or their guests; sometimes it was just because the narrative conceits are so ludicrous that my eyes were rolling like the wheels on a one--armed bandit. Yes, the series can take darker turns, but the lack of context and emotional connectedness to the characters causes it to collapse. The writing seems to assume emotional weight and power comes from having characters enter Quindecim who have dark, sometimes disturbing histories. This seems a fallacy of storytelling and character empathy, lazily assuming because terrible things have happened that this equates to meaningful narratives and emotional depth, when if anything it is more by the numbers reasons to have characters investigate the potential darkness in their souls. Worse still, once we peel back the onion of their stories, one especially, it collapses into sheer caricature; all suggestions of depth are merely illusory.

That said this is a standalone series and looks to set out some form of overarching story involving Decim and the dark-haired woman - but by the end I just couldn’t discern any point whatsoever in the series, in the characters, in the story; nothing is in any way investigated or delved into with any depth. With almost all the characters existing as meaningless cyphers – regardless of trauma – there was nothing to care about. By the end, as the story finishes, is there a moral? Erm, don’t judge people on artificially based ground? Death Parade, sadly, is a pointless, superficial and shallow series masquerading as deep, meaningful, dark, and willing to deal with deep emotions. Instead it is incapable of meaningful character development, and subsequently lacks any reason for existing. Send it to the void.