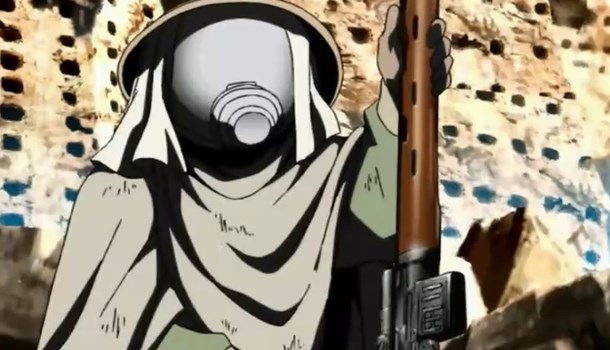 Here we are at the next batch of Desert Punk episodes, a series which has garnered high reviews in the past, but is the series still delivering the goods (and getting paid for it) this late into the series?

Things have taken a somewhat more serious twist in the great Kanto desert, as it seems as though the series is gearing up for a more dramatic sequence of events. Ever-present is the irreverent sense of humour which carried the series through its first three batches, but this time there’s an undertone of something bigger than old DP’s crazy adventures, with stirrings of power struggles between the hitherto absent governments of the various oases (that’s the plural of oasis – don’t worry, I had to look it up too) that are scattered around the desert. The post-apocalyptic future world of Desert Punk has always been intriguing, and so its nice to get some form of exposition as to the greater picture outside of what we’ve seen so far. The action set-pieces are still thrilling enough that I think Desert Punk could easily make the transition to an action series with a sense of humour, rather than its current status of comedy series which some great action sequences. It should be interesting to see where they take the show.

The animation still remains as good as it ever was, taking inspiration from the best pieces of new and retro anime, and the dub is still well-scripted enough to make me eschew the original Japanese and subtitles (although if dubs aren’t your thing, the subs are just fine, no dubtitles to be found here!).

However, some of the pacing lacks the same punch to it that previous episodes had, and the episodes here feel almost like filler, which makes me hope that the series does ramp up to a bigger storyline for the rest of its run, as the formula is beginning to repeat itself somewhat. The first two episodes (one involving DP’s attempt to sell an idealistic young man with ex-military connections, the other concerning Kosuna’s purchasing of a new weapon) left me feeling vaguely unfulfilled, as if I’d missed the jokes somehow (except for the laugh-out-loud moment at the denouement of the first episode, being the exception that proves the rule).

This time around we have footage of Desert Punk's director giving a talk at his alma mater, Tokyo Animator College, an episode of Desert Punk as it was shown originally in Japan, and the usual textless opening/closing sequences, trailers, etc. Personally I was hoping for some more of "Sunabouzou Internet Radio", but maybe that's just me.

8
Still the best series about a lecherous mercenary struggling to survive in an unforgiving desert. Even though it hits a slight lull now and again, Desert Punk is, as always, a lot of fun.
LATEST REVIEWS