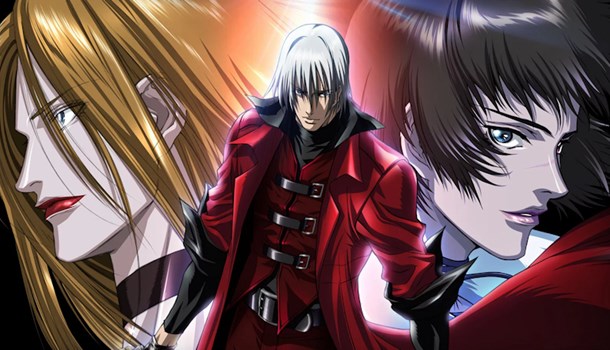 There is something of a love/hate relationship when it comes to making anime from games - The love comes from successes like the original Street Fighter II anime and then the hate in the form of the god awful Tekken and Guilty Gear anime. So, here we have an anime based upon a game that is known for its over the top fighting styles, gun/blade combos and a main character who is so up himself you’d punch him if you didn’t already know he’d hand your arse back to you, but after four games with what could barely be called a plot be enough to fill out thirteen episodes.

Dante is a devil hunter who will take on almost any job as long as it pays, though it seems any money he does get goes back into his debts. Dante is quickly joined by Patty Rowell, a young girl who ends up making her home at Devil May Cry after the first episode. This is then followed by the anime’s other unique character, Morrison as Dante’s agent, and then the two women from the games, Trish and Lady. Whether the plot is actually a part of the game’s timeline is hard to say, so it’s best just to think of it as an offshoot.

The series itself only weighs in at twelve episodes, so you are actually getting the entire series straight away, be it on Blu-Ray or on DVD. This can only be a good thing, as while there is an overarching plot to the series, it only really appears at the start and end of the series. The rest of the episodes are self-contained, focusing on the “Monster of the Week” theme with a couple of mix-ups to at least to try and stimulate some originality. That however is Devil May Cry’s big problem - originality. That’s not to say it’s a bad series, but there is next to nothing that has not been seen in some other horror/demon-slaying anime that has come before it. If it wasn’t for the game license, Dante himself could be any number of similar protagonists that have been slaying demons along the way... sorry, DEVILS. The action sequences can be entertaining at times, but it’s ironically when one of the other devil hunters like Trish or Lady or both are fighting that it rises above the standard.

Generally the animation is passable, as is the character artwork. The only section where the series does stand out is the music, which is a good mix of rock and gothic tunes which tie in well with the visuals, though this should be mandatory as the soundtrack to Devil May Cry 3 was one of the best in the series.

What I do take issue with is the quality of the actual DVD transfer itself. We were given the DVD edition to review and when booting it up for the first time there seemed to be grain effect during the course of the episodes. Whether this was intentional or not is something to pose to the person who created the master, but when the gradients are going from dark to light they can be visible quite clearly; I’m going to guess that the compression is a little higher than normal. Not enough to bring artefacting to the foreground in dark scenes, but enough to make it noticeable. Though if I’m concentrating on the quality of the DVD for most of the episodes, it does speak volumes about the entertainment value of each instalment.

I suppose I am dumping quite hard on Devil May Cry - As I said before, it is by no means a bad series; there is just nothing to make it stand out from similar shows apart from the game license. But that’s the issue here; the series feels like you’ve been given the game characters and basic premise, what more should it do for you? It’s more than happy to ride the coat tails of the game, though even that has slowed right down now Devil May Cry 4 has been out for a while.

If you’re a fan of demon-slaying and looking for something to fill that gap until the heavens open and the next episode of Hellsing Ultimate appears, you could do much, much worse. Just don’t expect it to rock your world.

Usual clean opening and closing titles. Interview with the voice actor for Dante and more footage of the Devil May Cry 4 game than you can shake a stick at.

6
By no means a bad series, just nothing special to set itself apart
LATEST REVIEWS