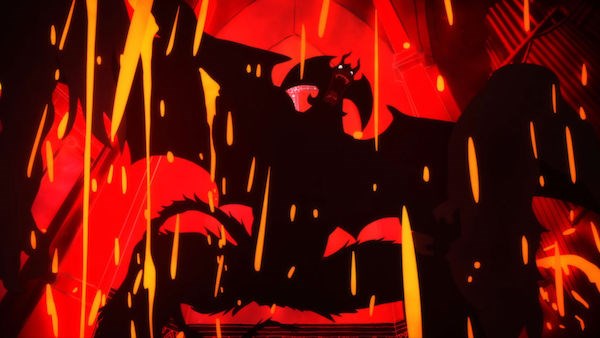 Devilman Crybaby follows hot on the heels of 2016 smash hit, and Greatest of All Time contender, Yuri!!! On Ice in the popular homoerotic sports anime subgenre. Ok, that was half a joke... Crybaby is a Netflix Original adaptation of legendary author Go Nagai's 1972-1973 five volume manga series Devilman, and broadly follows that plot. This adaptation is the third production by the studio Science Saru, founded by director Masaaki Yuasa and producer Eunyoung Choi.

Akira is the series' titular crybaby. Left in the care of the Makimuras (family friends) by his globetrotting doctor parents, he grew up with their daughter Miki. Now in high school he's famous for crying when he can tell that someone else is suffering, even if they aren't aware of it themselves. His life of study and running alongside Miki on the school track is turned upside down by the sudden reappearance of his enigmatic friend Ryo.

Ryo's aim is to recruit Akira in the fight against a race of ancient demons, who must possess humans in order to manifest and have returned after a long hibernation. The pair crash a 'Sabbath' party, designed to bring forth demons, and here is where the carnage begins. As demons begin to possess and/or eviscerate the other partygoers, Ryo's plan to have Akira merge with a demon but retain his humanity - in order to fight them - goes into action and Devilman is born in a sea of yellow demon blood.

This extremely violent scene should set your expectations for the rest of Devilman Crybaby. Being a Netflix show it is free of the constraints of what is acceptable on broadcast media, and nobody (especially not the sympathetic characters, or pets) in the series is safe from being gutted, raped, eaten alive, or shot to pieces. The director does pull the odd punch here and there where young children are depicted, but this overwhelming level of gore and misery certainly isn't for everyone.

The above setup where a mild-mannered teenager harnesses a mysterious power and becomes a badass in order to defend the world is well-worn in manga and anime. As are many of the early plot beats, such as Akira returning to school after his transformation and being mobbed by amorous girls (try not to roll your eyes too much - you'll need them to read the rest of this review), or his teammates commenting on it at the track and him shrugging it off. Akira is much less interesting in terms of character development than his friends and acquaintances, and their various relationships. He doesn't make for an especially interesting protagonist generally. In episode 5, while struggling with his massively increased libido and attraction to Miki he sexually assaults a female demon mid-combat. I found him a lot less sympathetic after that point despite his later musing that maybe the demons he's been tearing to pieces have feelings too.

The secondary characters are a delight however, all the best parts being when Akira is off screen. All of director Yuasa's previous works are remarkable for how deftly they paint the inner lives of characters. Even minor characters, who get little screen time, are fleshed out and layered. As with those previous works, the antagonists and even some of the villains (the lovesick demon Kaim and the ravishing, insatiable, Silene) get a turn in the spotlight. Standing out here is track club runner-up Miko, who struggles with being eclipsed by the faster Miki and has mixed feelings about their rivalry and relationship. Also the 'super highschooler' track star Koga is a rare treat: a gay character who isn't stereotyped, who has to deal with his own rise in fame, as well as the death of his clubmate and lover. It's only a minor spoiler to say that both of these characters have run-ins with demons and make different, but believable, choices as to how they play their cards in the coming demon apocalypse.

The background music fits the series well but isn't the star of the show, except in a very emotional scene at the tail end of the penultimate episode. Building on recent Science Saru productions, the inclusion of J-Rap into the foreground as part of the character of the street punk characters is a bold choice that works well and provides a standout character building moment. This only features in the earlier episodes and is discarded as the series turns toward the apocalyptic.

This production sees the further evolution of the studios attempt to build around the use of Flash as an animation production tool. The animation is masterful for the most part. Yuasa's signature fluidity and sketchiness results in some spectacular and visceral fight scenes. The more realistic and cleaner animation mode used for the human characters, in the parts of the show that feature running (athletic running, not fleeing-in-terror running), is used well to highlight the peculiar bestial running style of the possessed characters. It seems like the staff had a lot of fun with that.

Is it a demon apocalypse story with a bit of sports anime mixed in, or is it a sports anime taking place during a demon apocalypse? Much of the show is given emotional weight by playing at being a sports anime. Many of the metaphors used in the show are told in that framework - it quickly fills in backstory between many of the characters and gives them a canvas on which to depict their relationships. The use of repetition, flashbacks to early childhood, and sports metaphors makes me think that the previous work Devilman Crybaby resembles the most is Yuasa's brilliant adaptation of Ping Pong.

To conclude there is much to enjoy here; especially the cast of characters with their stories to tell. There's even the odd joke here and there. In one of those it makes a change to see Yuasa hilariously ditch metaphors for pent up youthful lust and use bodily fluids as a punchline, but I won't spoil it for you! Unfortunately I found the crushing tidal wave of gore and grim consequences for basically everyone depicted ground me down over the course of it. I didn't appreciate the depiction of sexual violence by the protagonist without any comment or consequence either. Not one for the squeamish.

You can currently watch Devilman Crybaby in streaming form on Netflix.