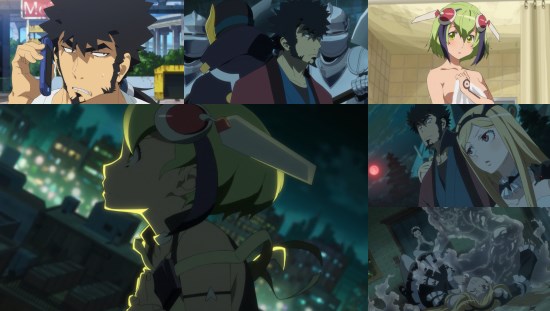 Ever since humanity was huddled in caves, rubbing sticks together to produce light and relishing the heat and light it provides, mankind has thirsted for reliable sources of energy - a thirst that has changed markedly over time as we came to understand the environmental impact and unsustainable nature of many of the energy sources we still use to this day. Of course, the holy grail of power generation is a clean, unending supply that could power the planet with more to spare, and given the various environmental concerns around the issue of power in Japan particularly in recent years, it's no surprise that we've seen the emergence of fiction that imagines the discovery of just such a power source.

In the case of Dimension W, we're quickly introduced by the opening of early episodes to a company named New Tesla Energy, who has discovered how to harness the energy produced by a fourth dimension (the Dimension W of the show's title) to produce unlimited power across the planet, all controlled by a sites located across the globe coupled with a "coil" technology system that New Tesla themselves have a monopoly over. Think Vividred Operation, but without all the tight shorts.

Unsurprisingly, the development of this fantastic technology and its subsequent locking away as a proprietary technology by a single company has led to the growth of a black market for coils, produced and sold illegally without the watchful eye of the technology's official manufacturer. It's a bit like those cheap printer cartridges you can buy, only rather than a pool of ink spilling out onto your desk you might end up with an inter-dimensional monster pouring into your living room instead - and that's if you're lucky.

Rather than having an official police force to police and prevent the dissipation of illegal Coils, this job has instead become the domain of mercenaries for hire. Foremost amongst these so-called "Collectors" is Kyoma Mabuchi - a perfect fit for such a task, given that he absolutely detests coil technology, instead preferring to live an old-school life with a gas-guzzling car and without the modern luxuries that the rest of the populace take for granted. Why does he hate Coil technology? Well, that's a question for another day, as it's yet to be revealed to the viewer five episodes into the series.

Although watching the curmudgeonly Kyoma stomp around after illegal coils could be good fun in and of itself, Dimension W can't help but throw a chalk and cheese relationship into the mix by outfitting him with a Coil-powered robot companion named Mira, who falls in with her new master after the death of her creator. Don't let Kyoma hear you saying it, but Mira is actually the star of the show here - the blend of intelligence, childlike curiosity and whimsy that sums up her character is a delight and her expressive character steals every scene in which she takes part. If this is the future of robotics, then sign us up!

Unfortunately, it does also have to be said that the series itself is rather too enamoured of Mira, and in particular her body - even setting aside an entire two episode story arc where she spends most of her time naked or in a towel, the camera can't resist on lingering on every curve of her body whenever she appears regardless of the circumstances of the scene in question. You can almost hear the director shouting "but it's okay, she's only a robot", using that as an excuse to lust over her body, breasts and thighs without compunction. It's a terrible excuse and it reduces a great, well-written character into an object of desire in a way which threatens to undermine her to a frustrating degree.

Now that we've got that off of our chest, we can admit that this is perhaps the only major issue which blights an otherwise thoroughly enjoyable series. Thus far we've only danced around the edges of its big picture as it slowly closes in on particular Coils known as "Numbers" which are as dangerous as they are potent, but even with so much left unexplored at this juncture there's plenty to like here. Aside from Mira, Kyoma's grumpy old man routine is a good foil to her excited exuberance (although the dude seriously needs to lay off punching her, it's not a good look), and the various other characters who have cropped up throughout the series so far have all performed their roles well - good news as some of them will clearly be returning to the proverbial field of play again in the future.

A lot of our enjoyment from the series so far has come from its variety. Some episodes have been simple affairs focusing on a single point of interest (for example, an episode peeking into Mira's struggles with her existence as a robot rather than a human), while others have sought to build up the show's grand narrative in some slick but versatile ways. It would have been so easy to make Dimension W a "criminal of the week" show, but instead we've been treated to a rich world that is ripe with possibilities, especially once you take the inter-dimensional nature provided by rogue Coils into account, leaving us with a show that can switch from action to horror at the flip of a robot's reset switch.

Given Funimation Entertainment's seat on Dimension W's production committee, it isn't too surprising to find that Dimension W feels like a decidedly western-friendly title, from its core premise which really doesn't lean on Japanese culture at all through to a typically catchy opening theme from Stereo Dive Foundation. In both tone and visuals, the series oozes the same kind of feel that you could find from the likes of Darker than Black and other properties that should be sure-fire sellers outside of Japan, effectively lifting the lid on the logic behind Funimation's involvement. Even setting this aside, there's a slick and satisfying feeling to the show's production - character designs are great, action scenes in particular feel vibrant, and the world and scenarios of the series so far have all been appealing as well as being suitably varied to match the content.

The opening five episodes of Dimension W have given us a good series, with strong foundations for the episodes to come and some equally strong early stories for the viewer to enjoy. If it can keep up this kind of consistency then we'll certainly be left with an enjoyable addition to the winter's streaming line-up, but greedy sorts that we are we also hope that the seeds its first half has sown will bloom into a compelling and more comprehensive story heading into its second half. The potential is there to elevate this series into the realms of the great, if it can handle the elements at its disposal with care, and without shrugging them off to concentrate on our favourite robot girl's curves.

You can currently watch Dimension W in streaming form on Animax UK.

7
It's done a lot right throughout its opening episodes, but there's still room for what has been a good series so far to grow into something even more impressive.
LATEST REVIEWS