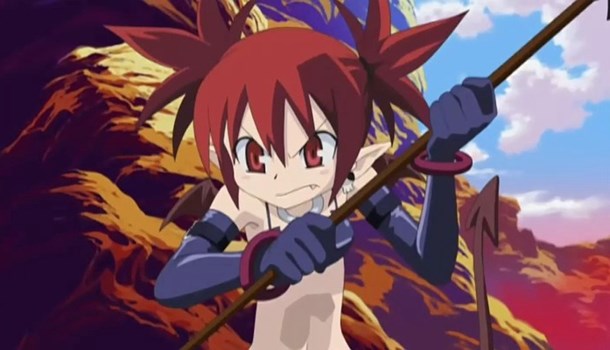 It’s very interesting to see a series completely change in tone so quickly. Between the second, (admittedly not-so-good) volume of Disgaea and this latest instalment there has been a complete change in both the flow and the tone of the series. Since the second volume, which consisted of what felt like filler (defined as a series of single episodes, seemingly disjointed from the last and containing amusing anecdotes and side stories), the final volume attempts to tie up the series by unveiling a nice epic four episode story arc - lovely.

First of all, the bad news - a couple of quite major characters are going to die, but in a very good way and by completely unexpected means. The good side of this is that this volume features an epic battle of Gunbuster proportions, which I always approve of. The extremely good news is that this volume more than completely makes up for the few dud episodes and finishes in such a way that I now have a Cheshire Cat smile from ear to ear, showing off all my glistening teeth and demonic fangs.

Thanks to a traitor within heroic human Captain Gordon's team, the entire Earth defence fleet and their buster weapons arrive at the Netherworld, with the aim of destroying all of demonkind (ok, so no buster weapon, but the ship is bloody big enough!). Standing in their way is the munchkin Laharl, the ever elated Etna and the flaky angel Flonne. A fleet of ships on one side and these three on the other - very much a one-sided match methinks. In the end though, it all turns out to be a Celestian conspiracy and the survivors go up to Celestia to kick some arse. Skipping to the end and a quick bish bash bosh later, angels and demons die, Prinnies reincarnate and everyone lives happily ever after.

I think Disgaea (both the games which i have part played, and this series) have a single adjective which best describes them: Special. The games have proven to be slightly addictive and a perfect waste of my pre-bedtime evening. The series has also proven to be a worthy distraction of my time, however the anime is not a series that you're likely to be absorbed by. Yes, it's showcasing your favourite characters from the game and retelling the same story (while cutting out huge chunks and adding random bits), but it's certainly not a fantastic watch... except for episode ten, which really is. Compared to the narrative, the character development, the humour, the witty retorts and the sarcasm which the game throws at you, the anime is unfortunately a poor copy, but it does have its moments.

That said, my experience is informed by the games, which have the time to tell a truly epic tale. The Disgaea anime won't take you rbreath away, but it's a well thought-out, dubbed and animated show.