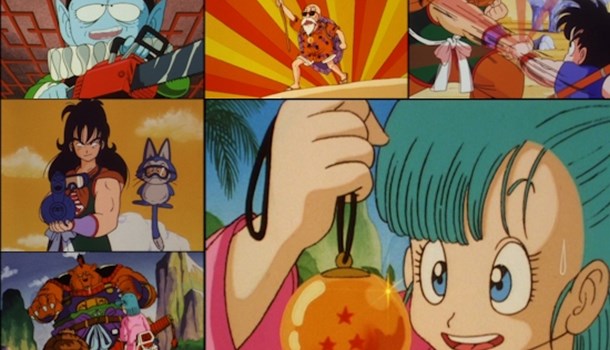 Now that we've been regaled by the timeless classic that is Dragon Ball Z, followed by the decidedly less classic Dragon Ball GT, it's time for UK anime fans to return to the root of the perennially popular franchise that is the original Dragon Ball. Historically, the first iteration of any series is often the best, so is that also true in this case? Thanks to Manga Entertainment's DVD release, we finally get to find out.

Needless to say, our story begins with Goku - a boy discovered as a baby in the wilderness by an old martial arts master named Gohan, who raises him as a child before passing away, leaving the young boy alone in the forests to fend for himself. This simple life of hunting, foraging and fending for himself is rudely interrupted by the arrival in Goku's life of a girl named Bulma, who is hunting for some mythical objects known as Dragon Balls.

Given that Goku himself was left with just one such ball, he finds himself dragged along by Bulma on an adventure to find the rest of these objects to unlock the wishes that they grant when assembled - of course, Bulma isn't the only one with designs on the Dragon Balls, and this hunt and the ultimate outcome of it leads to Goku taking the time to train and hone his martial arts skill courtesy of one Master Roshi, leading up to participation in the latest world martial arts tournament.

As someone who has delved into this franchise directly based upon Manga Entertainment's releases (i.e. in broadly the wrong order), perhaps the most enjoyable aspect of this first season of Dragon Ball has been seeing its characters and their origins introduced for the first time and watching things click into place as a result of this. Needless to say, there's no shortage of such moments here as the cast assembles for the first time, and watching these early episodes is a little like looking back at a photo album to see the characters in their formative days while comparing to how they turned out by the time Dragon Ball Z rolled around.

However, the Dragon Ball Z comparisons don't always yield such positive results - in comparison to its most successful iteration, much of this first season of Dragon Ball, and in particular its opening episodes, feels rather childish and immature. Admittedly, this is as much to do with its target audience as its quality, but compared to the life or death fare of Dragon Ball Z all of the panty shots and sniggering references to bodily functions take a bit of getting used to, and for the most part it misses the mark as a source of humour to boot. Thankfully, as the story develops and finds its stride such moments become less frequent and better utilised when they are, but be prepared for a rough ride for the length of the first disc of this release if Dragon Ball Z is your only prior reference point.

Perhaps unsurprisingly then, it's Goku's training and the subsequent martial arts tournament that prove to be the most fun part of this first season of the show - it isn't as intense as Dragon Ball Z, of course, but it manages to be entertaining and build some tension here and there as required of it while also giving you some lovable characters to cheer for. It's a bright and bold treatment that lets this part of the series get away with being a little meandering, because to be quite honest you're having too much fun to worry about it.

As a series that is getting on in years we weren't expecting too much from Dragon Ball's video transfer, but this UK release (based, incidentally, on Madman Entertainment's Australian release in terms of on-disc content) offers up a pretty good one - its grainy, certainly, and the second couple of discs exhibit more imperfections brought over from the masters than the first, but it's very much watchable and actually looks decent for the most part. Similarly, the show's English dub proves to be as good as ever, using the same cast as Dragon Ball Z and offering up plenty of energy - it's certainly the preferred way to watch the series over the mono Japanese audio track which sounds too dated to be bearable for too long. Although only one subtitle track seems to be listed on the release's menu screens, there are actually two sets of subtitles available - direct English subtitles based on the English dub script, and a translation based on the Japanese scripts; take your pick of which you'd prefer if you really do want to use the Japanese language track.

Finally, we should mention that disc one of this release also comes with the first Dragon Ball movie, Curse of the Blood Rubies - a fifty minute film which is basically a heavily altered retelling of the show's first saga, complete with entirely new villains. It may sound like an oddity but it actually works rather well to the point of arguably being an improvement upon the source material. It's certainly worth watching if you're a Dragon Ball fan and makes for a nice addition here.

It's maybe a little harsh to compare Dragon Ball to its successors, but at the same time it's hard not to given the franchise's UK release strategy, and in those terms this first season of Dragon Ball doesn't really match anything that Dragon Ball Z has to offer in terms of raw action, energy or excitement. This isn't entirely to this season's detriment mind you - it seeks to tell a very different story that is inherently more light-hearted and whimsical, and once it becomes comfortable with this task it broadly succeeds in an increasingly charming fashion that will appeal to anyone who's a fan of all things Dragon Ball, and quite possibly those who have given the series a wide berth until now.

In other words, this isn't the world of Dragon Ball at its best, but there are enough glimpses of what made it so beloved here to make for some entertaining viewing at least.

English stereo and Japanese mono audio with English subtitles.  Extras consist of trailers, character profiles, and the inclusion of the Curse of the Bloody Rubies movie.

6
It takes a while to get into its groove and feels decidedly childish while it does so, but there's just enough Dragon Ball magic in here to keep you coming back for more.
LATEST REVIEWS