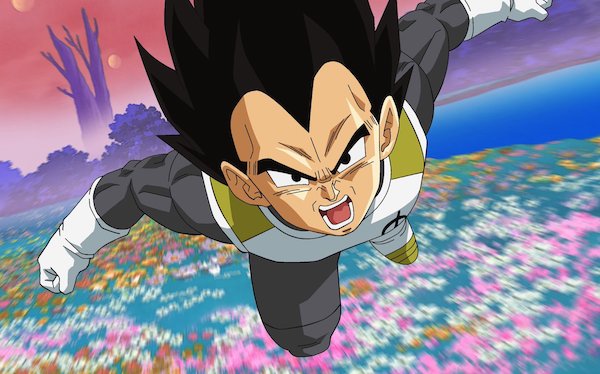 It’s rather tempting to simply copy and paste chunks of our review for Dragon Ball Super Season 1 Part 1 here, because many of the comments about that release apply equally to this one. Like the previous set this one regurgitates a portion of the Dragon Ball Super timeline already covered in the movies. In this case it’s Dragon Ball Z: Resurrection F which gets the padding and tweaking treatment.

The first episode of Dragon Ball Super Season 1 Part 2 wraps up the story arc from the last set, with Goku finally admitting defeat against Lord Beerus. Following Goku’s defeat life largely returns to normal for the Z-fighters. Though Goku finds himself increasingly under pressure from Chi-Chi to stop training and do something "normal" for once. And so Goku finds himself working on a farm... There are no prizes for guessing how long that lasts.

Though that's not before Vegeta discovers that Whis is Lord Beerus' trainer and prostrates himself before the deity's assistant, in an effort to gain favour and become his latest pupil. He initially makes a bit of a mess of the situation, but after successfully managing to propitiate (guess what popped up as word of the day while I was writing this) Whis - by appealing to his stomach - Vegeta departs for Lord Beerus' world to begin his training. Naturally it’s not long before Goku gets wind of this and wants in on the action himself, much to the chagrin of Chi-Chi.

The opening episodes of this set largely lean towards the light-hearted end of the Dragon Ball spectrum. Especially one early episode which deals with Mr Satan facing a challenge from outer space, something which holds a comedic mirror up the the series' later events. These episodes are a lot of fun, in the tradition of Dragon Ball. There is even time to cover the arrival of a new Saiyan on Earth, in the form of baby Pan.

Ultimately though this half of Dragon Ball Super Season 1 is about one thing and one thing only, the return of the Frieza Force, and eventually Frieza himself. This is one for the Dragon Ball Z fans, especially the 30-somethings who remember the original run on Cartoon Network here in the UK. Anyone who can recall the original appearance of Frieza will get a real kick out of these episodes, as much of the content of those episodes is mirrored here, albeit in a condensed form (thankfully, as the original was a long-winded affair).

Unfortunately the animation quality dips quite often in this set and there doesn't appear to have been much in the way of cleaning and improvement done since the notoriously bad streaming version. This really is modern animation at it's worst, I can't recall seeing anything this bad for some time.

When all is said and done, I can summarise this in much the same way as I did the last set: while this particular section of Dragon Ball Super may feel unnecessary, and is perfectly well served by the movie Dragon Ball Z: Resurrection F, it is worth a look for the differences in approach and is still just as entertaining as Dragon Ball has always been.

6
Just as unnecessary as Part 1, but still the same Dragon Ball we know and love.
COMMENT AND DISCUSS
blog comments powered by Disqus