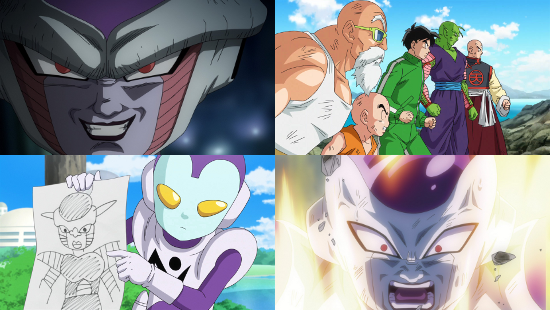 It is a time of great crisis for the Earth. Frieza has been revived by his lackeys after a sneaky use of Earth’s Dragon Balls, and he is dead set on exacting revenge on Goku for his defeat back on Namek and the destruction of the planet itself. Not only that, but he is bringing his army with him, the fearsome Frieza Force! While Vegeta and Goku are off training with Weiss and Beerus, the greatest of Earth’s warriors assemble to fight off the alien dictator and save their home. Can Goku arrive back in time to save the day from his revived foe, who has grown yet stronger in the interim?

Resurrection F is a big pile of distilled fan service - a bouquet of everything a Dragon Ball Z fan might be interested in checking out. Remember Frieza and how awesome he was as an antagonist? He’s back! Did you like some of the Z fighters who got superseded by various Saiyans and their silly hair hijinks? They get their moment to shine! You want to see Goku going to town on someone? Yep, we got that too. The impressive thing is that all of this works and feels as effortless as it does, and it doesn't get in the way of the film itself being great fun to watch. Personally it feels like a resetting of the world to a more sane and digestable layout following the Battle of Gods movie and its crazy cat god antagonist Beerus. The Destroyer still turns up in this film, but mostly to eat and exposit, and exposit while eating.

The plot itself is simple and for the most part keeps up a great pace. You get the crisis laid out, catch up with the cast and what they are doing, Frieza shows up to wreck shop, and then you get a solid half of the movie dedicated to fighting and fighting-related activities. It flies by and outside of a few mis-steps in the animation has you for almost the whole film.

Only almost, though. Sadly, the film utterly bungles its grand fight and conclusion in a way that utterly sucks all of the tension and gravity out of it. I can’t go into specifics obviously but the way the final fight gets undermined really sucks the air out of the room and is a massive let-down given that the film has an utter monopoly on your attention until that moment. The final resolution to the movie is such a wet fart, and one that was so heavily foreshadowed, this it is a sincere letdown - you end up with the last 10 minutes being a complete wet noodle which is all the more frustrating when everything proceeding has been great. Also, as a final complaint, Vegeta doesn’t get enough screen time... although on the other hand Krillin gets loads and I am more than happy with that.

Visually, Resurrection F is a production of two very disparate halves. When the movie sticks to traditional animation it looks sumptuous, especially in fight scenes. The action is imparted with a cleanliness and dynamism that looks and feels great, and even the expository elements have a vibrancy and a life to them that is great to behold. This animation is at its height when you have the Z fighter squad fighting the Frieza force - you get tons of locationally diverse action with punch to it (pun intended). You are definitely going to want to spring for the Blu-ray if you can for this one.

The other half of the film is the CG animation, which looks as ropey as hell. Every time it crops up it feels aggressively shoehorned in and take you out of the movie, with one early offender being a swooping camera shot around Frieza’s spaceship. The ship itself looks low-rent in CG and the animated actors in the scene slide around it awkwardly as they fail to stay in one place relative to the CG backdrop. CG is also used for when he Frieza Force is shown en masse - each individual fighter looks different at least, but every time movement is introduced they look like small particles in a viscous liquid, moving in a bizarre languid fashion that sucks the tension out of the scene. This is especially weird as Toei have shown a talent for using CG before and even blending it with traditional animation, and to see Dragon Ball Z of all things get the short end of the stick is mind boggling. This film deserved a better effort in this regard.

Perhaps my favourite part of the whole movie is the dub - the script and performances both. The cast feel right in their roles and make the characters come to life, chewing the scenery with great relish at all times. Frieza gets the lion’s share of the best moments (outside of Vegeta having the best single line in the film), and Christopher Ayres is back to put in a stellar performance as the resurrected jerk. The soundtrack is also great, dipping into utter absurdity at times with a Japanese metal track yelling about Frieza. It’s stupid but oh-so fun.

Resurrection F is about 76 minutes of amazing film that then has another 13 minutes of bad conclusion stapled onto the end. When it is firing on all cylinders it is a joy to behold, and as mentioned this only makes it more of a shame when the resolution comes and can’t pay off all this great preceding material. Still, it is well worth a watch whether you are a current or lapsed Dragon Ball Z fan - there is plenty to love here. Just not the CG. Ew.

REVIEWER'S NOTE: This review was conducted using a stream of the movie provided by a PR company on behalf of Manga Entertainment - no check disc was sent. As such we cannot comment on any extras (physical or on-disc) or the packaging. The stream provided was dub-only, so we similarly cannot comment on the subtitles or the Japanese audio track. The quality of the video reviewed may also differ from that on the disc.

English and Japanese 5.1 audio with English subtitles. The Collector's Edition package of the movie comes with seperate Blu-ray and DVD versions of the film, a cardboard slip cover and a set of four art cards.

7
A wonderful romp let down by questionable CG and a very weak ending.
LATEST REVIEWS