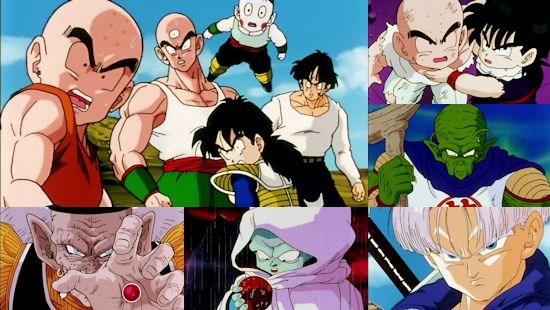 With the epic battle with Frieza on Namek at an end, and Goku off doing... well, goodness knows what really; this fourth season of Dragon Ball Z finds itself with some time to take a bit of a breather.  You know what that means.... it's filler time!

While the early episodes included with this collection go off on some rather dull tangents surrounding Krillin's girlfriend (who is effectively both the comic relief and fan service insert for this entire season) and a new tutor for Gohan, the mainstay of season four's opening gambit is actually a follow-up on the plot of one of the franchise's (currently unreleased in the UK) movies, bringing us the return of Garlic Jr.  Having been cast into the so-called "Dead Zone" along with his band of Spice Boys (no relation to the Spice Girls, before you ask), this diminutive villain wastes no time in exploiting an opportunity to return to Earth with a view to capturing the Dragon Balls and making himself the planet's ruler.  To this end, he and his henchmen deploy the "Black Water Mist" - a fog that brings the negative and most violent emotions of anyone it touches to the fore, making for a tricky challenge for those remaining as they find themselves battling not only Garlic Jr and company, but also some of their own comrades.

Once this story is done and dusted, we move on to our next story arc proper as the gang (including Goku as he eventually returns from his travels, and Vegeta who also returns after an intense and fruitful bout of training) find themselves visited by a few guests, some of them entirely unwelcome while another proves to be far more enigmatic and mysterious.  Calling himself Trunks, this young man decked out in Capsule Corp attire informs our heroes of an impending peril that is to befall them three years later which threatens to wipe them all out.  Of course, forewarned is forearmed, and after fast-forwarding through those three years in relatively short order, the team is fully prepared to tackle the androids set to be dispatched to take them out as part of an evil professor's masterplan... or are they?  This being the series that it is, nothing is as simple as it seems, and this android threat proves to be far more menacing than even Trunks has imagined.

Given the epic nature of the Frieza saga, shifting its focus elsewhere was always going to be a hard sell for this series, and as expected it never quite lives up to the expectations created by what has gone before.  In particular, this volume's filler material never really gets the bloody racing and feels like it's very much going through the motions in an occasionally contrived fashion in an attempt to fill out some time in the manner expected of the show.  Although it has its moments, this is by far the most forgettable stretch of episodes that Dragon Ball Z has delivered so far.

Thankfully, things take up an upward turn with the appearance of Trunks - although some aspects early on in this story arc feel almost criminally underutilised in comparison to what has gone before, once the series settles into its groove things are much improved; never quite up to the quality of the Frieza saga admittedly, but by the time this season comes to a close with the fate of our heroes (and anti-heroes) still in the balance you feel like you've derived a decent amount of value out of this latest bumper bundle of episodes.

As per prior volumes, the overall video quality of this release looks as good as you could hope for given the relative age of the series, and the English dub continues to be a thoroughly enjoyable experience with only the occasional eye-raising moment which doesn't quite fit in with the scene in progress.  One notable addition to this fourth season's DVD release is the introduction of "marathon mode", which allows you to watch an entire disc in one sitting without having to sit through the opening and ending credits or recaps at the start of each episode - a big time-saver and perfect for a busy reviewer who has been watching far too much Dragon Ball Z of late!

Overall then, this is the weakest season of Dragon Ball Z thus far, but that isn't to say that it's bad - once you reach the second half of this six-disc set there is plenty of twisting and turning shounen goodness to enjoy, and the series as a whole rarely ceases to be fun to watch as it goes about its business with a knowing eye for the ludicrous nature of its own concepts.  That I can still say I'm enjoying watching this series after almost 140 episodes of it in such short order is an impressive recommendation in itself.

6
Some weak early episodes means that this isn't Dragon Ball Z at its best, but its second half and the return to a major story arc means there's still plenty to keep those who have enjoyed the series so far entertained.
LATEST REVIEWS