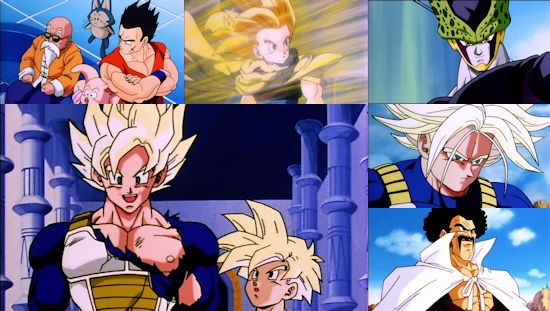 It seems like only yesterday that we started out on this path of reviewing Manga Entertainment's UK release of Dragon Ball Z... which just goes to show how watching this series can warp your sense of time and reality, I suppose.  Anyhow, I digress - now that we've reached the sixth set of DVDs and passed the show's half-way mark, is it still impressing us?

Having seen Cell complete his goal of ingesting the required individuals to make him a "complete" being, it seems that this malevolent beast is already hungry for a new challenge, but can anyone or anything provide it?  There's only one thing for it in this instance - a fighting tournament!

Thus, the preparation for the "Cell Games" begins, with the future of the Earth and its entire populace at stake, driving another round of our usual group of heroes (and reluctant heroes) madly powering up in the hope that at least one of them can find the abilities they need to defeat their monstrous opponent.  Needless to say, Gohan and Goku are amongst those leading the charge to reach new peaks of their power, bringing forth a new paradigm in terms of their Saiyan abilities even if Goku seems to be entirely *too* confident about his ability to defeat Cell.

Of course, if you were expecting an entirely fair fight out of Cell then think again - complete fighting machine or otherwise, Cell has no interest in playing clean or safe for the cameras, so hopes of anything other than no-holds barred fights to the death are quickly allowed to vacate the premises via the nearest window.

Once the stage is set, the vast majority of this set of discs takes us through the ensuing tournament and the fight to defeat Cell and save the planet - a conflict that takes a number of crazy but undoubtedly Dragon Ball Z-esque turns as desperate times call for desperate measures.

This brings us to the problem with this particular story arc of Dragon Ball Z - so tight is its focus upon defeating Cell and the "tournament" around this revolves that it's hard for the series to keep your attention for its duration.  With no major changes in locale, things quickly lose their lustre visually, and unfortunately with a few exceptions most of the action isn't of a sufficiently engaging quality to make up for that.  Compared to the overblown tension of battling Frieza or the all or nothing attitude of saving the Earth from Vegeta's wrath, there's something less satisfying about the setup here even though the stakes are just as high, not helped by the fact that the arc simply goes on for too long to the point where it quite substantially outstays its welcome to my mind - a first for me, as I've been pretty patient with the show's sometimes glacial pacing up to this point.

That isn't to write this collection episode off entirely - some of its humour hits the mark effectively, and there are moments that will make you sit up in your chair and start paying attention for entire episodes at a time.  Besides such highlights, the overall package on show here is very much more of the same in terms of its core tenets, so the hardcore Dragon Ball Z fan will probably enjoy most if not all of what it has to offer regardless.

In many ways, it's a backhanded compliment to Dragon Ball Z that it's taken six entire volumes for me to call an arc out as being too long-winded to be particularly interesting - still, that doesn't change the fact that this is the weakest serving of Dragon Ball Z we've been served to date that lacks sufficient points of interest to drive along its main story.  It isn't bad per se, but it is decidedly harder to find the motivation to watch it, especially in hefty chunks; an issue which will hopefully not reoccur in series seven, with some further interesting twists seemingly now ingrained into its story.

5
For arguably the first time, a Dragon Ball Z story arc outstays its welcome, although it still provides a fair amount of entertainment value regardless.
COMMENT AND DISCUSS
blog comments powered by Disqus