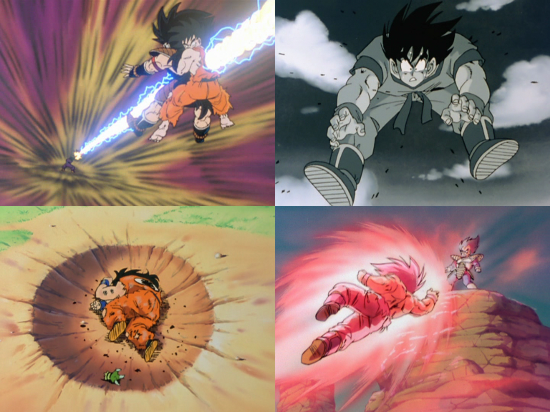 I, like almost everyone my age I know, watched Dragon Ball Z as a kid and then never revisited it - not out of dislike, but simply because it is such a massive time investment. I even bought the first DVD set from Manga Entertainment but never touched it because starting felt like a threat - “Start watching this and you’ll never escape 100+ hours of dudes fighting!”. I was instantly interested in watching Kai to see how this childhood pleasure holds up in a new svelte form.

So, the plot: Happy go lucky chappy Goku is attending a reunion with friends and introducing them to his young son when a brutish stranger turns up and announces himself as Goku’s long lost brother from another planet! Shocker! This alien jerk Raditz then kidnaps the young child Gohan and demands Goku assist him in wiping out all life on the Earth to show his familial loyalty. Incensed, Goku teams up with his arch rival Piccolo to get Gohan back and kick his unpleasant brother off the planet. Little does Goku know that this is only the start of his problems as he finds himself pitted against stronger and stronger opponents in his desire to protect those close to him, and the planet that he calls home.

Dragon Ball Z Kai works as intended - it feels just like the Dragon Ball Z you remember. The trick here is that your memory is terrible and you have forgotten how much the original series loved padding episodes out with filler - such old favourites like having the secondary characters over-explain attacks in excruciating detail, showing someone in transit, having someone grunt and charge up while hypothesising about their upcoming attack, and many other meaningless but effective spacers. All of these things are still present in the show but cut down to much more reasonable levels, only putting in an appearance in the cases where it is directly plot relevant or useful for maintaining pacing. In total, this first set of Kai compresses down 57 episodes from the original series into 26 episodes here without feeling rushed or aggressive in its cuts.
This has a massive effect on the flow of the show, and in particular the fights. Combat is much snappier; a lot more brutal and intense with less buffer between volleys of attacks and ridiculous energy beams. Fights that famously took the better part of a season to resolve now take a few episodes at most and feel far more brutal, more refreshing as a result.

The setup between fights is also reduced in Kai, and arguably benefits to a greater degree. Events flow a lot better with less filler and you get a lot more out of each episode. This can lead to some jam-packed episodes, particularly in the second half of this set as the action cuts between four different sets of characters in very different locations, each with their own objectives and actions in play.

The edits do have some other side effects - secondary characters feel the cut the most, and a lot of the returning cast from Dragon Ball are barely present at all. It also frontloads a very brief overview of the events of Goku’s origins to get you up to speed, probably because the show assumes you are already a Dragon Ball Z fan and would not be surprised by these revelations. In addition, the show makes liberal use of the narrator and having characters directly call out how much time has passed or how long it is until the next fight, given that the series is famous for putting in time limits for structure and tension. This leads to some strange cases where a whole episode may spend the whole time at “Three hours to the next fight!”,  then jumping to “30 minutes to the next fight!” after a single scene.

The show has a lot of material to use, and one clever thing it does is use fresh animation not used in the episodes proper in the recaps and previews that book-end each episode to help cover minor events. This is especially evident during training arcs, where it will put some of the skipped steps of the training into recaps to give it more weight.

The series is presented in glorious 4:3, and has been mildly remastered to provide a clean picture although there are still small imperfections in the image - light bleed coming on from the left and right sides is sometimes apparent, as is an authentic degree of grain. I was sent the DVD version for this review and the original material looked just fine in this format.

Sadly there is a downside to Kai - the new animation they have added to the series in terms of both edits to the original episodes and the entirely new opening, ending and commercial break sequences are atrocious. Edits within the episodes to bridge cuts in plot sequences look lazy and and flat, like an amateur approximation of the series itself, and some new sequences added into the fight scenes are choreographically very impressive but are incongruous in both art and feeling compared to the original footage and come out the weaker in the comparison. The entirely new material also looks awful and the opening/ending songs in particular are ear-rendingly bad. Thankfully the chapter markers on this release work so you can quickly skip past them! It doesn’t help that the authoring for this new material is equally awful. The compression present in the opening and ending is outright wretched, with any kind of movement turning the picture into an artifacted mess. Another victim are the mid-episode eyecatch cards, which are aliased as heck in the majority of episodes, although in some cases they look fine for some reason. Thankfully the original series material is untouched by these issues.

Due to the degree of edits, Kai has a brand new dub compared to the “full” Dragon Ball Z release, both in script and recording - in particular, the meme-tastic “Over 9000” line is absent. Some of the voice talent has also changed, mostly among the villains - in particular Frieza has a new actor (Chris Ayers) and he does an astounding job revelling in the role. The dub is by-and-large excellent, although I am not a fan of the decision to leave some special attack names untranslated in this version. “Makankosappo” just doesn’t sound as meaty as "Special Beam Cannon" in a dub track. The Japanese track is also here and available if you want it, although I cannot stand Goku’s original voice so beeline for the dub every time.

Another thing the series has in spades are Power Levels. Yes, Capital P, Capital L. I hereby proclaim that Power Levels have ruined anime by exchanging actual shows of force with numerical approximations that characters can gab about for minutes on end. You don't realise how obsessed people are with them until you hear them mentioned as often as they are in Kai. Annoyingly, Vegeta discards his scouter at the start of his fight with Goku saying how unreliable power levels are and it somehow limpets back onto the side of this head for him to obsess over later in the fight! It only hit me in Kai how they have crept into so many other series and here is patient zero. That said, it is satisfying when a villain screams “But your Power Level is only- Blaughhh!” and gets clocked in the jaw.

Dragon Ball Z Kai takes the flawed, over-sized gem that is Dragon Ball Z and turns it into - well, a smaller flawed gem. The show itself has benefitted massively from the edits making it into a leaner, meaner beast - making it all the more shame then that the new modern material lets it down, but thankfully this is by and large ignorable. Still, if you want to see Dragon Ball Z - just not every last second of it -  then Kai has you covered.

8
All the Dragon Ball Z you want in less than half the time!
COMMENT AND DISCUSS
blog comments powered by Disqus