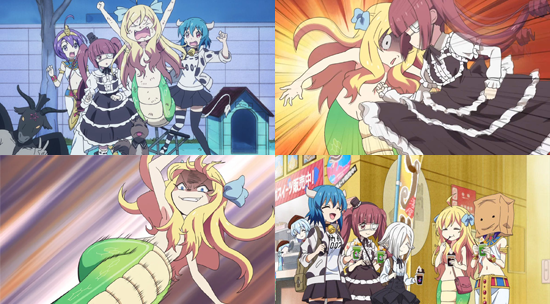 Dropkick on my Devil!

If you’ve wondered why not many titles in Amazon Prime’s anime selection get reviewed here on the UK Anime Network, it’s for the simple but unfortunate reason that Amazon doesn’t make it terribly easy to see them. Apart from the almost total lack of publicity of what enters and leaves the anime category on Amazon Prime, where even high-profile titles pass like ships in the night, almost all of the hottest new releases are double-locked behind the Funimation Now sub-subscription. I’ll probably never watch these because I resent paying to access Prime only to have to pay even more on top to access what you actually paid for Prime to see in the first place. In fairness Amazon Prime aren’t the only offenders here, and if I find paying double for Funimation intolerable It really makes me wonder what Disney+ thinks it’s playing at by charging extra to watch the new live-action Mulan. Admittedly, this is a moot point – we hardly matter, Mulan’s going to make a squillion quid regardless because everyone in China will watch it four times by order of Chairman Pooh-Bear – but seriously, I’d appreciate comments: who in their right mind is seriously going to pay thirty (!) bucks to rent a title on a streaming service that you’re already paying for? Physical 4K collectors’ editions don’t cost that much! The splintering of online streaming provision into smaller network-specific ranges is quite rightly denounced as a greed-blinded short-sighted backwards trend, essentially going back 20 years to reinvent cable TV, but Disney have regressed even further and reinvented Blockbuster Video.

Even if you keep to the basic packages, it’s hard to even find out what shows are available on unaugmented Prime because Amazon’s curation is shockingly bad. Anime on Prime is mixed in with a hotch-potch of videogame cutscenes masquerading as short films (some scammer’s even ripped a bunch of discarded pre-alpha Lovesick: Yandere Simulator dialogues and is presenting them as a TV series), a weird range of Middle-Eastern nursery-rhyme cartoons which are fascinating but not what I was looking for, and most bizarrely a live-action 1980s Romanian police procedural Comrade Detective which has clearly been categorised by mistake but hasn’t been corrected for months.

The above has seemed like a lot of antagonism and negativity, but I needed to set it out to also establish that there are still good titles on Amazon Prime which do still reward you and feel worthwhile beyond that trouble, and merit the higher level of patience digging through the catalogues to find them. For instance, the critically-acclaimed modern remake of Osamu Tezuka classic Dororo is available on basic Prime, and even if you have to scan past about 94 individually-listed seasons of Yu-Gi-Oh and Pokémon to find something else – pushing through barriers to achieve victory no matter how long it takes, that’s what Killing Bites is!

Willingness to stick with Prime in this way is also how I uncovered another hidden gem that we’re admiring today – the zany and anarchic screwball comedy Dropkick on my Devil!

Adapted from an ongoing web-based manga series which has been written since 2012 by the mangaka Yukiwo, Dropkick on my Devil! Recounts the many, many, many misadventures of Jashin, a snake-woman lamia demon summoned from Hell to be the servant of Yurine – a Gothic Lolita-dressed witch who lives in modern Japan. Such servitude, however, is less about scheming for the overthrow of civilisation and the ravaging of the Earth in an unholy inferno… and more about being told to go down to shop for the daily groceries and not being allowed to spend her allowance on pachinko machines and gachapon capsule toys. Such a slavedriver! So unfair!

Jashin is continually scheming to murder her mistress Yurine and escape back to Hell (ideally with her signature ‘dropkick’ aerial tail-smash), but these assassination plots are undermined by one consistent and fatal flaw… Jashin’s own terminal incompetence! Oh well… even if Jashin has lost the groceries when being distracted on the way home, Yurine knows that all it takes a spot of agonising brutalisation with a carving knife and she’ll get to enjoy sumptuous snake-meat steaks for dinner while the punished Jashin crawls off to regenerate and try it all over again. Thus is set the routine of the perfectly ordinary daily life of Jashin, Yurine, and a host of weird and wonderful mythological creatures, fallen angels, and other strange beings that live alongside them.

Dropkick on my Devil! could be summed up as a full-length version of the “Itchy & Scratchy” segments in The Simpsons, as Jashin continually comes to grief in exuberantly excruciating ways with a fountaining exaltation of cartoon bloodletting and cheerful torture. I remarked in my review for the Hellsing Ultimate OVAs that “ultraviolence is the best violence” and that’s not just limited to action dramas but applies thoroughly to comedy skits too. A personal favourite incident was in the final episode when Jashin re-enters from orbit to announce her glorious return – and smears herself down a quarter-mile of road with a blood streak that looks like the artist studied about a thousand fly-splattered windshields to get just right.

You might think that a one-note gag like this might suit an occasional yonkoma newspaper strip but get repetitive over the course of a whole cour of anime, but Dropkick on my Devil! keeps it entertaining throughout and never gets boring. A lot of this comes down to the character of Jashin herself. She has a very well-drawn personality, in that she’s a splendidly detestable wretch! “Devil” in anime these days so often amounts to little more than ‘cute girl with handlebar—er, horns’ but Dropkick on my Devil! isn’t afraid to show that Jashin, a devil, fulfils that definition by being amazingly, incurably, determinedly unpleasant. Vain, obnoxious, loud, petty, impatient, jealous, entitled, selfish, vindictive, cruel – and inveterately stupid! – she will run the whole gamut in a single scene. Jashin’s a manipulative bully who shamelessly exploits other people’s better natures (particularly with her outright co-dependent relationship with the cutesy and long-suffering gorgon from whom she constantly mooches money) and sadistically picks on lower-level demons while cravenly fleeing from stronger ones. You’re fascinated to watch just to see what depths she’ll sink to next and you never feel too bad for her when she gets her deserved come-uppances. Jashin’s fundamental childishness is shown up by a good scene earlier on when she’s caught out in an obvious lie and having run out of excuses she can only mumble “I don’t know” at the floor like a scolded toddler. This is aided by a superb performance from her voice actress Aina Suzuki who showcases a great breadth of expression, from cackling snickering glee to snotty burbling misery and everything in between, she really sells Jashin’s antics and you even feel her genuine remorse when she belatedly realises she’s pushed things too far. The cast as a whole is a bit shrieky, though, so if you’re sharing the house with other people you’ll have to keep the volume down on this one and it can wear on the ear after a while, you'll want to watch this one or two at a time than binging it all at once.

Jashin is also not belaboured too much either, and there are frequent breaks to check in on other cast members. The script also frequently breaks the fourth wall – one skit even calls out the original manga’s publisher, which is courageous! Another I liked is the pixellation filters being used not just to hide violence but being deliberately set up by Jashin to conceal her schemes. A substantial amount of humour is referential – such as a gag when Jashin eats an angel’s halo to power-up and everyone gets Dragonball Z-style faces for a scene – but they are passed over fairly quickly and don’t outstay their welcome. There is a moderate bit of sightseeing to do as the cast often visit real-life cafés and restaurants around Tokyo – in one episode Akihabara is introduced with a real-life photograph of the burned-out wreckage of the Tokyo firebombing, which is astonishing to compare to the concrete jungle it is today.

The pastel background art is lovely and colourful and a welcome soothing contrast to the intensity of the bloody comedy pratfalls in the foreground. The interesting quality of the art continues because If your only experiences of fantasy creature like lamia in anime are in ecchi shows such as Monster Musume or the new Monster Girl Doctor, then Dropkick on my Devil! is actually quite fascinating precisely tacking the other way with a near-total lack of fanservice. Jashin stands out as being completely unlike the slinky sinuous smothering lamia of other shows – while she always goes about topless, long straggly unruly hair always disguises her torso and the flat, shapeless, cartoony way in which she’s drawn also means there’s no sexuality to her at all. The same goes for the rest of the cast too – while minotaur-girl Minos and a minor policewoman character are bit chesty, no great attention is drawn to it except for a few non-sexual gags (Minos has such good cushioning that Jashin’s tail-swipes bounce off her harmlessly) outside of the beach scene in the very final episode, and even then it’s quite light.

Even if it can be hard to find the right show on Amazon Prime, when you do land on it you are rewarded by more effort in the presentation. Dropkick on my Devil! translates the lyrics for both the opening and ending sequences – something that Crunchyroll and Netflix often ignore – and signage is also widely translated too, albeit squeezed in between lines of the dialogue subtitles which doesn’t always give you much time to read them. There’s a cheeky bit of product placement inserted into the script – “Prime delivers so fast!” Yurine coos when a package arrives – but it’s small and unobtrusive enough for me to not mind it as a simple gag. Happily, Amazon also include the extra bonus ONA episode that wasn’t part of the original television broadcast of Dropkick on my Devil! – I remember being very annoyed and feeling missold a few years ago when the so-called “Complete Series Collection” of Kill Me Baby! was missing its OVA episode and I thank Amazon Prime for not repeating MVM’s mistake here.

Dropkick on my Devil! is lively, energetic, enthusiastic and vivacious. I thoroughly enjoyed it and would love to see more. Unfortunately the retrograde problem of divided streaming services that I referred to back in the opening paragraph was not just me bellyaching about tangential issues but specifically affects this show – a second season of the Dropkick on my Devil! anime was broadcast in Japan earlier this year, but while the Japanese streaming license is still held by Amazon Prime, the international license is held by Crunchyroll so you’ll have to make an account over there to watch more episodes in translation. Nonetheless, even if it’s only half of what’s available Amazon’s offering of Dropkick on my Devil! definitely earned my subscription.

Audio is Japanese-only. Subtitles are English-only.