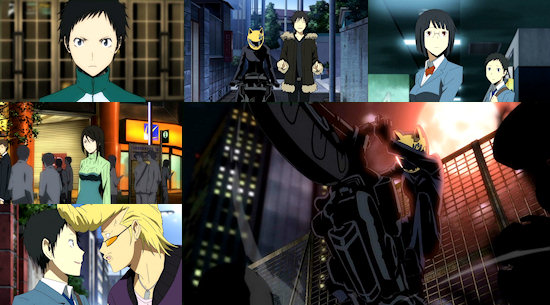 The UK release of the first volume of Durarara on DVD both thrilled and disappointed us in equal measure: thrilling us on account of its slick, rich character-driven story yet frustrating us with issues regarding the technical quality of the disc's presentation which took some of the sheen off what was otherwise an excellent start to the series.

I wouldn't normally kick off a DVD review with discussion of its technical aspects, but given those aforementioned issues with volume one it's well worth tackling them up front on this occasion and to be quite frank, the news is rather mixed for Durarara's second volume.  For starters, all of the episodes presented here have once again undergone the transfer from NTSC to PAL via what is known as "PAL speed up", meaning that all of the content on show here plays 4% faster than the original source material - this can be occasionally distracting for anyone who has previously watched the show in its streaming form bereft of such issues, although in fairness it only really frustrates when it comes to the opening and closing credits which inevitably suffer from their soundtrack running faster than it should.

The other major issue we had with volume one is garbled, badly compressed background audio which was incredibly annoying throughout - this issue remains through the early episodes of this second DVD instalment, only to seemingly vanish once we reach episode 12.5 and enter the second half of the series.  It's an issue we're more than a little relieved to see the back of, even if it should never have been present in the first place in our opinion.

Anyhow, with that out of the way we can concentrate our thoughts upon the nine episodes present across these two DVDs.  This means that we start with Mikado finding himself the centre of attention from numerous parties after saving a girl from the pursuit of "headless rider" Celty, with a number of other parties also taking interest in his new "acquisition".  It's under this pressure and a notable threat from Yagiri Pharmaceuticals that Mikado finally shows the true colours which he's kept so well hidden throughout the series thus far, bringing us a climax to the first half of the series that is, quite simply, a magnificent and fabulous work of genius that pays off the careful build-up of the show to this point with a surfeit of interest.

It's probably thankful that this wonderful climax is followed by the first of Durarara's bonus OVA episodes, officially numbered as episode 12.5, to give you time to catch your breath via a fun but slick side-story which demonstrates a lot of the reasons why the series works so well in microcosm, complete with a somewhat Memento-esque story delivery mechanism.  From here, we're swiftly placed six months after the events of episode twelve, as the second half of the series begins in earnest in the midst of a public furore about the increase in attacks by the so-called "Slasher" around Ikebukuro.  As these incidents intensify yet further, the Dollars find themselves in the spotlight as the rumoured origin of the Slasher, while the truth proves to be far murkier, surrounding as it does a cursed sword and at least one major and rather harrowing plot twist.

If you had any doubts as to the quality of Durarara's story-telling from volume one, then those doubts should be utterly crushed by this second volume of the series - it's a rip-roaring tour de force of intelligent, character-driven anime that will either drop your jaw or leave you with a huge grin on your face as the first half of the series finally lays its cards on the table and proves itself to have a proverbial royal flush of elements to thrill you to the core.  Moving in to the second half of the series, there are even more twists and turns in store as Durarara continues to weave its blend of comedy, drama and mystery into a mix that really couldn't be much more entertaining if it tried.

While those technical issues still take the sheen off things to some degree, and there are even a couple of missing lines of subtitles on the second disc to further frustrate, you can't keep a good series down and Durarara at this juncture is certainly up there as one of the most proficient pieces of anime story-telling in recent years.  We simply can't complement it enough for the way it successfully manages to keep so many characters and plot elements in the air at one time while still keeping the viewer gripped in every single episode no matter its focus, and it's that ability to hold you in awe and immerse you in its off-beat but somehow believable take on Ikebukuro that makes this such a stunning effort that we really can't complement enough.

Japanese 2.0 audio with English and German subtitles.  Extras consist solely of textless opening and ending credits for both halves of the series.

9
Its PAL transfer and audio issues continue to frustrate, but this is easily surpassed by this volume of Durarara showing what the series is capable of, bringing it into the ranks of must-watch anime series in the process.
COMMENT AND DISCUSS
blog comments powered by Disqus