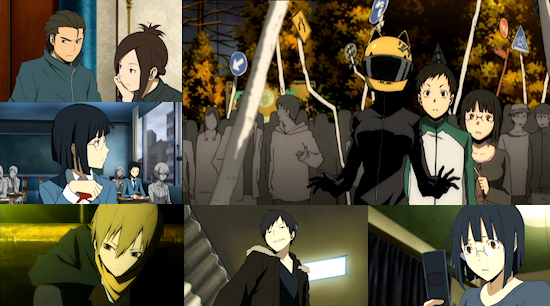 The second DVD volume of Durarara brought us the fantastic denoument of the first half of its series, a flash of genius in an already impressive series.  After a short breather, that same volume delved straight into its second major story arc - an arc which comes to its conclusion in this third and final volume from Beez Entertainment.

With the so-called "slasher" incidents still at the forefront of everybody's mind, and with the Slasher's identity unknown to all but a small handful of people, there's a palpable sense of tension surrounding our three main characters and the secrets that they hold as this volume begins, even if at least one of these secrets soon evaporate thanks to Anri Sonohara's curiosity.  Before that however, we get an opportunity to dig a little more deeply into Kida Masaomi's history, in an episode which explains the origins of the Yellow Scarves as well as the ties which bind Kida to (who else) Izaya and the reason for Kida's eventual departure from the gang until current events forced his hand.

As this second half of the series progresses, so the web which binds that main trio of individuals becomes ever more tangled and awkward, drawing more characters into the escalating tension as Izaya fuels the fires of paranoia and discontent while the Yellow Scarves in particular threaten to take on a dangerous life of their own.  Can anyone pull out of this constant downward spiral towards open warfare on the streets?  Well, that would be telling wouldn't it...

In keeping with Durarara's story telling style throughout, many of these final episodes are told through the eyes and narrative of a particular character as they chronicle their experiences and emotions - not only does this add a unique feel to the series, it also works as an important vehicle for delivering emotional impact to the show as we become invested in its characters; something that is potentially difficult to achieve with such a large roster of major characters, but a requirement which is pulled off effortlessly here.

This narrative style, coupled with some more traditional examples of smart story-telling, makes for another top-notch batch of episodes that don't ultimately wrap up all of the show's loose ends (it is based upon an on-going light novel series, after all) but does enough with them to create a satisfying climax that resolves all of its major plot points.  Having initially watched the series in streaming form on a weekly basis during its Japanese broadcast run, I have to note that the ending to the series feels far more acceptable when watched "en masse" in DVD form - an entertaining climax to a fascinating series.  To top it all off, these final episodes also feature some great set piece scenes, the highlight of which must surely be a chase across Ikebukuro as Anri tries to evade the clutches of a particularly rebellious group of Yellow Scarves members. It's a simple affair in concept, but its execution is utterly brilliant - indeed, it's that same sense of brilliance that pervades the series as a whole.

In technical terms, this is by far the best volume of Durarara that Beez Entertainment have served up to us - its final, additional OVA episode aside, the other episodes here don't suffer from the audio and notable PAL speed-up issues we've seen in the first two volumes, and it's all the more enjoyable for that.  Subtitling quality is generally solid, with only the most minor of mistakes and omissions not really sullying the viewing experience at all.

Overall then, Durarara is an undoubtedly great series, and this final volume has plenty to back up that assertion for it to keep in its locker.  If you've enjoyed the first two volumes of the show then you'll need no encouragement to go out and buy this final instalment, but if your heart is still wavering about whether Durarara is for you, we can't be clear enough that it's well worthy of your time and money.

Japanese audio with English and German subtitles.  The sole extras on this series are "karaoke" versions of the opening and ending credits.

9
A hugely satisfying end to this smart, compelling series puts Durarara very much into the realm of must watch anime.
COMMENT AND DISCUSS
blog comments powered by Disqus