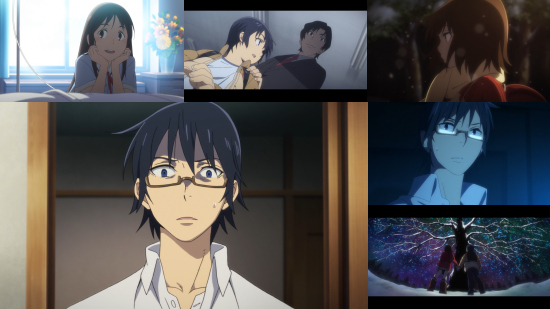 Satoru Fujinuma has a gift... or is it a curse? In the event of a tragic occurrence to someone in his vicinity, he finds time rewinding to before that event took place, granting him an opportunity to rectify the events and save the life of the person involved. Think Steins;Gate without the science, or Life is Strange without the video game mechanics and teenage angst.

For some, this ability - which Satoru has dubbed "Revival" - would grant them an exciting life of playing the hero and saving lives at every juncture. However, this shy and retiring man in his late twenties doesn't sport the personality to inhabit this kind of role, and instead he handles occurrences of Revival in the same way as he handles his part-time pizza delivery job: he just quietly gets on with his "work" without complaint or concern until it's done and he can get on with his day.

However, things are about to change massively for Satoru, as not only does a terrible memory from his past come back to haunt him, but it also impacts directly on his present in a massive and unexpected fashion. The resulting fallout of this confluence of events leads to a triggering of Satoru's Revival ability - this time however, he isn't transported back a few minutes, but instead finds himself dropped all the way back in 1988. Clearly, fate has required that he resolve this painful event from his childhood so as to "fix" his present - but is ten year-old Satoru really up to the task?

It's this which gives us the core thrust of ERASED - Satoru may have been thrown back into a child's body, but his brain is still that of a man eighteen years his senior. Socially awkward he might be, but this version of 1988-era Satoru is both literally wise beyond his years and armed with at least some knowledge of the events about to unfold that he needs to prevent and resolve satisfactorily. Is that enough to lead him to success in his endeavours? Well, that's just one of the elements that makes this series so compelling.

A good time travel yarn always has plenty to offer narratively, but the first three episodes of ERASED feel like the work of someone who has repeated a period of time several times over, learning more every time, because these opening instalments are effectively flawless. Every element of the show combines to craft a complete package - the characters are easy to relate to and feel fully realised, the pacing and story are expertly delivered, and the sense of atmosphere that each episode generates is simply phenomenal and leaves you unable to tear yourself away from the screen.

The source material for the series (Boku Dake ga Inai Machi in Japanese) is already much-feted and clearly gives this anime adaptation plenty to work with, but the way that ERASED plays and builds on those strengths shouldn't be underestimated - the composition, use of colour and sound direction all evoke a precise atmosphere that changes and shifts as required, from the mundanity of Satoru's everyday life in episode one through to the creeping sensations of tension and dread that come from circumstances which fully unfold in episode three. Even the voice work for the series is smartly played out, switching between Satoru's child and adult voices as required to follow his actions or thoughts, and sometimes having both of them pipe up together to add impetus to pivotal lines. Add top quality animation which brings about some sublime moments visually, and you have yourself an early contender for one of 2016's best shows if it can keep up this level of quality.

I don't really want to talk about ERASED's plot in any more detail as experience it as it plays out adds a lot of impact to its story, so let's just say that it feels like a mature, detailed and well-planned narrative that succeeds where a lot of other thrillers in anime form fail for one reason or another. Such is its story-telling power that the worst part of its simulcast run thus far is the seemingly interminable wait between episodes - my desperation to get my hands on the next episode every week thus far speaks volumes here.

At this point, it's hard to countenance ERASED screwing up as it moves forward - it feels so confident and self-assured that I can only imagine it carrying this level of consistent quality throughout the remainder of its twelve episode run. The only real question is how the series will end given that the source manga is still on-going, but we'll cross that bridge when we come to it - for now, ERASED is the must-watch show of the winter season, and an example of the story-telling potential of anime as a medium at its finest.

10
A flawless start to a compelling thriller that bodes well for what could easily prove to be one of 2016's best series.
COMMENT AND DISCUSS
blog comments powered by Disqus