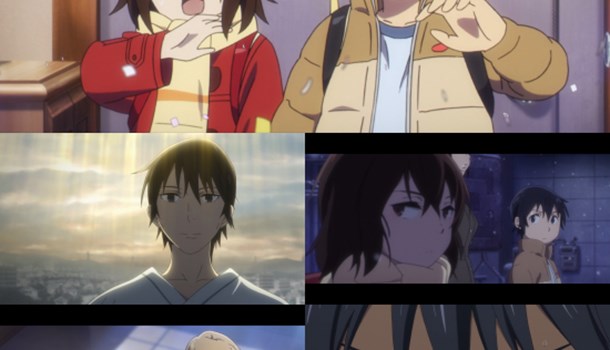 To state that the early episodes of ERASED were intriguing would be a rather large understatement - in putting forth its intriguing setting and ramping up its atmosphere and tension, it was practically flawless. No wonder then that it brought forth much excited chatter, from both ourselves and anime fans across the globe.

Thanks to its slick direction and laser focus, come the end of episode three we knew very much the kind of ride we were in for, as protagonist Satoru Fujinuma faces a race against time and the disadvantages of having been transferred into the body of his younger self as he tries to save Kayo Hinazuki from her fate at the hands of an unknown serial killer. Needless to say, there are twists and turns along this path - failure, a return to the present day which presents Satoru with a whole new slew of challenges - and even the prospect of securing Kayo's future only leads to further questions as to whether he can save the other girls on the radar of the murderer or perhaps even unmask the killer himself.

It's a breathless ride as we follow Satoru on his ever-more desperate quest - the series certainly knows how to finish episodes on a cliff-hanger, tantalising you into wanting more while still leaving you satisfied with what you've just seen and the oddly pleasant unsettling feeling that the series continues to promote via its oppressive atmosphere where something is never too far away from derailing Satoru's plans.

Much of the viewer's interest if fostered by how well Satoru and the rest of the cast's roles are written and played - its protagonist is likeable and walks the fine line required of an adult inhabiting a child's body expertly, and other characters serve their roles smartly. The wider cast's importance is particularly notable when combined with the show's aforementioned sense of atmosphere - this is a world where few can be trusted when seen through Satoru's eyes, and the lines between friend and foe can quickly become strained as both he and our own eyes look for signs of deception in every line and movement. It's a sense of paranoia which ERASED hooks into brilliantly, teasing major revelations that then turn out to be innocuous as it builds that atmosphere over multiple scenes then releases it all again at the drop of a hat. Even then, those moments which are waved away leaves the viewer asking questions as to whether they have a broader meaning, ensuring that as week-to-week viewer you're left thinking about the series far more than your average anime.

Of course, eventually all of this building and releasing of tension has to build to a crescendo. A big reveal. Just who is the killer? Its here that ERASED arguably falters a little, unfortunately. Admittedly, much of this is due to just how masterful the build to this big moment has been - there is so much importance put upon the reveal of the killer that expectations of some masterful twists or surprise are stratospheric, and of course there's no way it can deliver upon that. This leaves the moment where the curtain is pulled back to feel a little mundane - still well directed and delivered (give or take some clunky dialogue which also disappoints in places), and absolutely in keeping with the story as told up to this point, but as a viewer you're left feeling certain that this moment would deliver *more* in some intangible way.

Provided you haven't fallen into that trap of inflated expectations however, the reveal is in keeping with the story we've seen to that point, and the good news is that there's still more to come - the final episodes of the show move in some unexpected directions that offer up an interesting yet satisfying way to close out the story and tie up its loose ends.

Aesthetically, ERASED remains terrific from start to finish. Its animation quality drops off a little here or there, but its framing and composition is always on point, bringing us back once again to the sense of tension and atmosphere which is often evoked via lighting, use of colour and shot composition. Equally important in the equation is the show's music, with Yuki Kajiura's haunting background music proving to be a perfect fit for the sinister undercurrents which swirl beneath the series at every turn. Not that all of this means there's no room for levity mind you - there are also some brief but much-needed moments of comic relief to be found where appropriate.

Overall, ERASED succeeds where so many other anime fail in creating a compelling thriller that genuinely leaves you on the edge of your seat without drifting off into flights of fancy or treating the audience like idiots and spoon-feeding them clues. Yes, there are clues and hints of things to come throughout the series, but there are so many of them that it feeds into the sense of paranoia we alluded to earlier, which is sufficiently successful in obfuscating the truth to make it feel like something of a surprise when we come to it.

Putting aside the fact that its big reveal is perhaps a victim of the show's own success, ERASED remains a highlight of the winter season and a strong contender to still be labelled a gem once the year is out. Having bemoaned anime's apparent inability to craft a good thriller or murder mystery in the past, this is proof that it can be done, and done with style to boot.

9
A tense, atmospheric thriller that largely delivers on the boundless potential of its early episodes thanks to a powerful story and strong direction.
LATEST REVIEWS