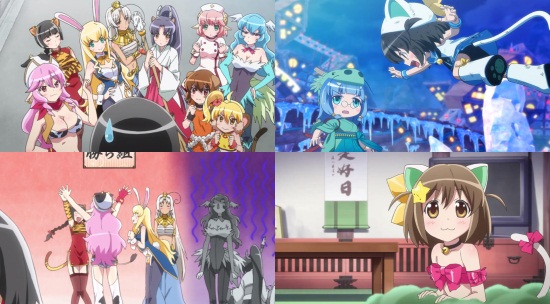 A series based on the Chinese zodiac has been tried a few times in anime, most famously of course in the fabulous Fruits Basket. This season Etotama is bringing a new take on the old story, so it’s time to check your birth date and figure out which of the girls you'll be rooting for!

Takeru is all set to move into his suspiciously low-priced new accommodation when he finally figures out just why the cost is so low - there's a hole in the floor of the living room which leads to the realm of the "etomusume" - anthropomorphic versions of the animals of the zodiac as well as a variety of other hopefuls who want to join said zodiac. This being based on the classic tale our hero is introduced to Nyaa-tan who embodies the cat which, true to her nature, swiftly sets about doing everything she can to manipulate him into liking her so he'll produce sol/lull which acts as the power source of the girls' abilities, allowing them to transform into chibi versions of themselves to do battle as part of a festival that offers the victors a chance to join the ranks of the zodiac. Naturally the manipulative, lazy, headstrong and hyper Nyaa-tan wants in, though when pressed she can't quite remember why; meanwhile Chuu-tan the rat is dead set on making sure she doesn't succeed.

Etotama, as it turns out, is actually really great fun to watch, blending the real world hijinks of the instantly likeable etomusume with the CG action-packed world in which they do battle. The gags for the most part are genuinely funny, which is great (a running gag about the order of the zodiac is brilliantly done) and the characters are so fun and adorable that you can't help but like them. They’re also not afraid to break the fourth wall for one or two brilliant gags to help introduce new features to the show. In turn, the action scenes are fast and fun with the conceit of transferring the action to an alternate realm providing a great excuse to bring in transformation scenes, over the top special attacks and a constantly shifting variety of arenas for the action to take place in.

This also means that the shift from the traditional animation set in our world to the CG animation of the battle sequences manages to avoid the pitfall that's befallen other recent shows like KanColle as there's a proper reason for the visual shift. It also helps that the CG sequences are so stylised as to not even be making an attempt to blend in with the rest of the show, and happily it not only works well but looks pretty good too with the girls looking utterly adorable as they do battle in their chibi-fied forms.

Ironically it’s the main plot that tends to get in the way here, as every time the gang start making veiled references to Nyaa-tan’s past with the villainous Chuu-tan the fun just grinds to a halt and has to build itself up all over again. This is especially a problem in episode three, which tries to do some darker, more meaningful stuff but ends up making you wish it would go away so you can get back to the great gags.

Overall though the series is bright, fast and just pure fun to watch and it’s come essentially out of nowhere to become one of the best shows of the season thus far. If you’re in the mood for something to just sit back and enjoy without needing to worry about anything more that when Moo-tan will make her triumphant (and almost certainly hilarious) return then Etotama won’t steer you far wrong.

You can currently watch ETOTAMA in streaming form on Crunchyroll.

8
As much fun as watching a cat chase a laser pointer!
COMMENT AND DISCUSS
blog comments powered by Disqus