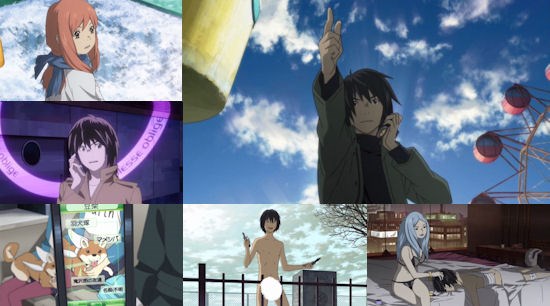 Eden of the East: Air Communication

It’s always nice to be able to recap a series just before diving into a post-series feature length film. For example, when the Stargate SG-1 film came out, I remember spending a good week catching up on the previous series just so that I would know the story behind the film. To me, this was enjoyable, but not an entirely profitable use of my time, and I wished that the convoluted storyline could have been condensed for easy digestion.

With this in mind Manga Entertainment has provided us, the consumers, with a delightful shortcut which both saves time and gives us the knowledge necessary to enjoy the two "proper" upcoming Eden of the East films. This initial movie, Air Communication, is essentially the condensed and retold version of perhaps one of the greatest romantic conspiracy stories in recent anime history, but with a rather pleasant twist, which I’ll save until later.

Air Communication is the first movie of three and lovingly condenses the eleven episode series into a single two hour feature. The synopsis of Air Communication is identical to the original series which UK Anime Network has previously reviewed here (well worth a good read as it accurately details the excellent characterisation, the intricate and incestuous storylines and the obsession with penises). The questions is though, what does this condensation of the original story do for the Eden of the East franchise, and does the film serve its purpose as an adequate recap for the rest of the movie series?

Long story short; yes. Air Communication is a seamlessly edited feature-length version of the series, with its editing lovingly undertaken by the original director and creator of the series and the subsequent movies. The important scenes from the series have been retained, with the “fluff” in between (which unfortunately includes a lot of the more personal scenes involving Saki and Akira) left out in favour of the more important story driving scenes. I personally think this is a bit of a shame, but a necessity in order to cut the length of the story from just under six hours to just two.

What Air Communication does add however, is a running commentary from the major characters throughout the film, adding their opinions and occasional dirty thoughts to the goings-on within the movie. It is this commentary that allows much of the fluff to pass almost un-noticed and allows the scenes to pass so seamlessly. This commentary is actually quite beautiful, as it is the characters themselves, discussing their actions and actually talking over the dialogue within the film to explain why they made their decisions and why things happened the way they did. At critical times, such as the arrival of 20,000 naked men, it’s actually quite enlightening.

I think the best way of describing this quite peculiar addition is that Air Communication provides the gift of hindsight. The series, which at times is beautifully complex, is described by those who made the story happen in a way that is more concise and it delivers this without sacrificing any of the features of the series which made it so excellent in my opinion.

After watching Eden of the East: Air Communication, I have come to the conclusion that it is more than just a recap; it is an entity unto itself. The commentary and the editing actually contributes to the overall story and although the events between the series and this movie are identical, the way it is told in Air Communication makes the series more easily understandable as its easier to digest. The semi-constant over-talking by the characters during times of dialogue within the film will distract viewers potentially up to the point of confusion at times (especially to those who have not seen the series) and its perhaps not the best way to introduce a new fan into this glorious universe. However, as a means of refreshing your memory before the main event, the "second" film and the continuation of the series, The King of Eden, Air Communication serves its function well.

Air Communication is included within both the DVD and Blu-Ray releases of Eden of the East: The King of Eden from Manga Entertainment

Japanese audio with English subtitles.  Extras specific to this movie on the release include a "news flash", previews and TV spots.

8
Not as complete as the series, but still obsessed with 'Johnnies' all the same.