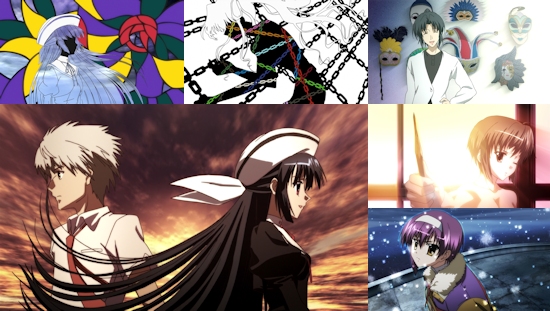 Ef - A Tale of Melodies

In our review of its first series, A Tale of Memories, I suggested about this visual novel adaptation from SHAFT that "if you're a fan of Clannad then this is a series you should really consider picking up" - now, a month later, we have the show's second season in our hands to see if it can elicit a similar response.

Having resolved its major relationships in that first series, it'll be no surprise to hear that A Tale of Melodies shifts its focus to an entirely different subset of the show's cast. Although you'll still find appearances from the cast members we became intimately familiar with in the first season, there are another two burgeoning yet troubled love stories to serve up for viewers this time around as A Tale of Melodies builds a little further on its world containing two seemingly identical towns and the threads that bind them.

In fact, much of this series dips into the past to bring us the full story of the mysterious Yuko Amamiya and her relationship with Yu, interspersed with the present and violinist Kuze and his troubles as they pertain to the energetic young Mizuki Hayama who takes an instant shine to him after a holiday meeting as temporary neighbours.

While its previous series offered up some pretty traditional sets of tangled relationships, love triangles and the like, A Tale of Melodies delves into some far, far darker subject matter, from terminal illness through to physical and sexual abuse. It would be wrong to say that the series throws itself into these elements with gusto, as it certainly doesn't attempt to glamorise them, but it leans heavily into them in a warts and all fashion to focus beyond simply love and friendship to recognise some of the less pleasant aspects of the human condition.

What really sets the series aside from other similar anime adaptations is how it goes about presenting the key aspects of its story, via all sorts of flamboyant splashes of visual language. While some of these moments can be a little forced or over-bearing, there's no denying it adds a real flair to an otherwise dialogue-heavy series, and this use of descriptive visual language really comes into its own when the series has to deal with some of its tricky subject matter. Discussing the abuse laid upon one of the show's characters could so easily have ended up giving the wrong impression in a blur of nudity and graphic violence, but instead the way that production studio SHAFT have chosen to represent such scenes is not far shy of genius - striking and memorable, yet no less harrowing for its treatment.

In a sense, this entire series as a whole is a perfect fit for SHAFT's "eccentric" production values, allowing them to produce an entire episode in black and white for reasons which eventually become clear, and employing all sorts of visual language to graphically depict the struggles and suffering of its characters. This kind of metaphorical take on events won't be for everyone, and its intentions are so blatant it can hardly be called subtle, but there's no denying that it can make for a feast of colour and eye-catching imagery that elevates this visual novel adaptation beyond just countless scenes of talking heads.

Thankfully, both stories covered by the series are strong in their own right so as to be accentuated by this treatment rather than propped up by it - these two bittersweet tales can sometimes be cruel or downright hard to watch, but provided you aren't insistent upon a requirement for happy endings both stories are satisfying to watch through to their conclusion, emotional rollercoaster though they might be.

In broader terms, MVM Entertainment's DVD release of the series looks good enough and holds no major issues that we spotted (even if we really wish the visuals in this series had gotten the Blu-Ray treatment they deserve), and the show's English dub remains pretty solid although it lacks some of the emotional power inherent in the delivery of the original Japanese voice cast. We do wish that this release also provided the full-colour version of that aforementioned black and white episode (which was offered in the Japanese release), but we can only assume those materials weren't made available in other territories.

Taken as part of Ef as a whole, it's actually quite curious as to how different A Tale of Melodies is from its predecessor, providing a dark and harsh take on life compared to the relatively trifling concerns of the stars of A Tale of Memories. Not that this is a slur against either side of the whole - different they might be, but both series are compelling in their own ways and have a strong story to tell, creating an equally compelling whole to mark Ef out as amongst the best visual novel to anime adaptations you're likely to find. Add those engaging visuals we've mentioned to the mix, and A Tale of Melodies in particular is a release well, well worthy of your time.

8
Its story is darker and more bittersweet than Ef's first series, but that only serves to make it all the more potent.
COMMENT AND DISCUSS
blog comments powered by Disqus