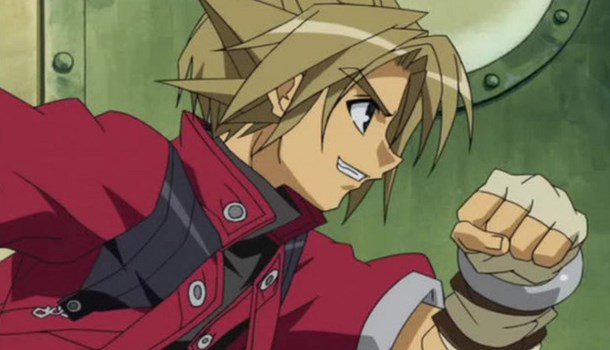 Elemental Gelade tells the story of Coud van Giret, or Cou to his friends, a mere youngster in a band of sky pirates who go by the name of Red Lynx.  Following a successful raid on some rich aristocrat's ship, and after being mocked by his colleagues, Cou can't resist the chance to take a peek at the crew's latest bounty.  Here, he stumbles across and unwittingly activates a container which holds a mysterious, sleeping young girl.  The girl awakes, and thus Cou is introduced to Ren.  From here, things soon become somewhat chaotic for our hero – First, his ship is boarded by an unlikely trio from a group called Arc Aile, before being attacked by another faction, both of whom are intent on taking Ren for themselves.  In the midst of this melee, Cou learns the true purpose of Ren – She is an Edel Raid, a girl who can 'react' with a human to become a powerful weapon.  Thus, Cou's adventure truly begins, as he vows to protect Ren on her chosen journey, while being followed by Cisqua, Rowen and Kuea, that Arc Aile trio we mentioned earlier.

Considering that the Elemental Gelade anime has been adapted from Mayumi Azuma's original manga, it's of little surprise that this first volume of the show suffers from many of the same problems.  From the very start, the series has a very definite 'seen it all before' story, with everything from the plot itself to the more humorous moments shouting 'cliché' from every pore.  This isn't helped by the rather basic and cheap-looking animation used throughout, which only helps to add to the whole generic feeling of the endeavour.  Thankfully, the voice acting is a little better - On the Japanese side of the coin anyway, with the English dub being predictably terrible.

Despite all of its predictable flaws, I have to hand it to these early episodes of Elemental Gelade for introducing us to an infectious little series if nothing else - The sheer energy and pace of the show helps to keep it from sinking into snooze-worthy territory, as at least there's always something going on to hold your focus for the full duration of the episode.  Similarly, all of the main characters are somehow really rather likeable on the whole, so that you can find yourself caring about their fate a little throughout.

At the end of the day then, Elemental Gelade certainly isn't a highbrow or ground-breaking affair, but it gets by as an acceptable bit of entertainment through its quick-fire pacing and strangely loveable qualities.  If you can squeeze your way past the cliché-driven and rather thin plot, then there are far worse ways to while away a couple of hours.

Extras? What extras?  A text-free set of opening and ending credits are all you’re getting here.  A smattering of trailers and a choice of English or Japanese with subtitle language tracks make up the rest of the disc.