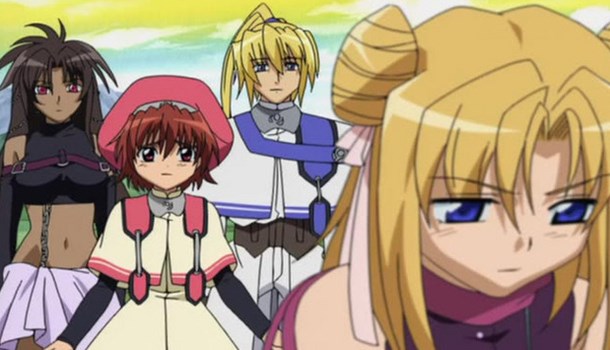 When we left Elemental Gelade at the end of volume three on DVD, things were just starting to get interesting, with Cou and Ren separated after journeying together for so long, while Cisqua and company were left torn between their allegiance to Arc Aile and their two new found friends.  With the half way point of the series reached and the focus of the storyline becoming clearer, can volume four deliver something special?

This latest volume of Elemental Gelade sees Ren continuing alone on her journey to find Edel Gardens, whilst unbeknownst to her, Cou is soon in hot pursuit to help her along the way.  However, the two aren't reunited until after the latter meets again with Wolx, an old adversary from an earlier episode and hardly the kind of guy who’s going to be the life and soul of your Christmas party.  Luckily for Cou, he isn't the only one whose made a decision to follow Ren - Cisqua and her team have also conveniently 'taken a vacation' from work at Arc Aile to seek out the pair.

From here on in, things only (and rather inevitably) become more dangerous for the medley of travellers on their way to Edel Gardens, as Arc Aile's deadly enemies Chaos Choir and their Sting Raids (think Edel Raids, only bad... and with fewer clothes) get a proper introduction, hinting at the challenges to come.

This slight change in pace actually shakes things up somewhat for the show as a whole - Although there is still a fair amount of humour sprinkled throughout each episode, it feels somewhat toned down compared to previous volumes, with more importance placed on Cisqua's various conflicted feelings with regards to Arc Aile, and of course the dangers of Cou and Ren's journey as a whole.  This helps to make the overall feel of the show just that bit tighter, without losing any of the entertainment value from the various characters and their plight.  Indeed, the obfuscation of Arc Aile's true intentions adds a nice little edge to the light-hearted world that came before, an edge that will doubtless become sharper and sharper as the series draws to a close.

Overall, volume four of Elemental Gelade has moved the story on not only quite significantly, but also in a suitably gripping way.  Sure, it isn't classic stuff that you'll want to watch over and over again, and the animation quality will hardly have you drooling, but it still succeeds in entertaining for the duration of each of its four episodes.  Perhaps more importantly, I'm finally finding myself somewhat more personally attached to some of the main characters come the end of this volume, which leaves me wanting to watch the rest of the series to see what happens, rather than out of simple completeness.  If that isn't a sign of a show being a good way to while away your time, I don't know what is.

7
When the going gets tough, the series gets better.
LATEST REVIEWS