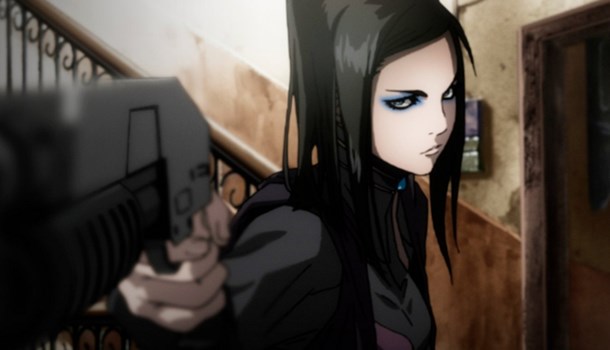 The following series which you will now be compelled to watch with alter your very perceptions and beliefs. If you experience symptoms of cerebral cellular residue escaping your sinus cavity, please discontinue watching immediately, and watch something more suitable, perhaps some Fruits Basket!

You have been warned!

For those fans living off the fansub circuit back in early 2006, Ergo Proxy was hyped to be something truly spectacular.

The series is set in the far future. The Earth has been completely decimated by nuclear war and the surface is entirely barren. Mankind has constructed its salvation, a series of domes based around the globe in which the surviving population live. The story begins in a domed city called Romdeau which operates in a wholly sealed environment, employing a strong doctrine and populated not only by humans, but also by autonomous beings referred to as “autoraves”.

The story begins with Real Mayar, an inspector for the Citizens Information Bureau (think FBI). She is on acase to discover the cause of a series of brutal murders within the city. The cause of these murders, as she comes to discover, is twofold, with some being caused by a virus, Cogito, that brings true sentience to the autoraves, with the rest caused by a Proxy. A Proxy is a superhuman creature with unimaginable strength whose origins are shrouded in mystery. While investigating she finds herself stalked and quickly confronted by a proxy, whose identity we discover later. However, she is left with a message which promotes a sudden sense of uncontrollable curiosity, “Awakening”.

Real finds herself drawn to a delightfully odd chap called Vincent Law, an emigrant from the destroyed Mosque (Moscow?) dome. Its pretty obvious from the first episode that its love at first sight for him towards Real. Unfortunately for this chap, something wants to kill him...

Ergo Proxy is not a simple show to understand. From start to finish it's a continuous tangled web of lies, deceit and revenge, topped off by a single monstrous story arc and frankly, I absolutely love this series!

Ergo Proxy was one of the first anime series to be created with HD in mind, and subsequently there's a level of sharpness to the series that's visually very striking. The colours are quite muted, with everything a shade of grey, and it lends itself very well to the tech-noir flavour.

The dub is pretty good, with no-one truly grating, which makes the dub or sub decision one of pure preference.

This is a monster of a series, which messes with your mind whilst providing plenty of action to keep the pace at a jaunty clip. If you like your Sci Fi cerebral, this is the one for you.

9
Do your brain a favour and feed it this high quality Sci Fi.
LATEST REVIEWS