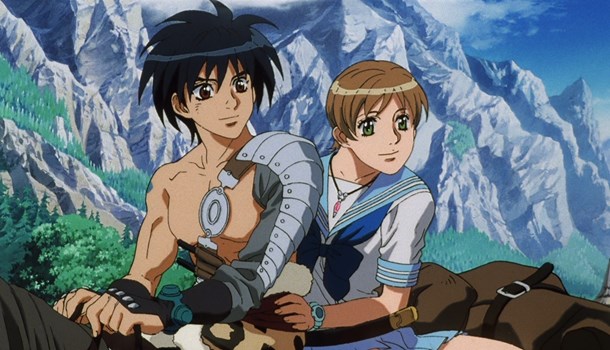 Turning a television series into a movie is never an easy prospect, one which often doesn't work, no matter if your dealing with updating a show from the 80's - as per Hollywood's habit in the last decade - remaking the original or simply creating a new sequel. This leads us neatly to Escaflowne The Movie, a remake of the original 1996 series Escaflowne. Originally released in 2000 it was produced by Studio Bones and Sunrise. So, can this remake measure up the original?

Hitomi Kanzaki is a girl in a bad place: She's suicidally depressed, purposefully isolating herself from friends and family, and wishing she could simply disappear. On top of this she's having bizarre dreams (or memories) about an odd looking boy, as well as a cloaked figure who is beckoning her to come to him. This all conspires to transport Hitomi to an alien world called Gaea - that is hidden behind the moon - and arriving in the cockpit of the titular Escaflowne. Escaflowne is a mecha and upon arrival Hitomi falls into the arms of one Van Fanel, a hot headed and aggressive prince who is in the middle of leading a rebellion. From there we follow Van and Hitomi as they bond and try to save Gaea from the evil Black Dragon empire.

Being honest the original show was one of the first anime I ever saw, and it easily sits in my top five of all time. It has a great story and characters but is, sadly, the type of series no one makes anymore. This view was reinforced following my re-watch of the Blu-ray release from Anime Ltd. about a year ago, therefore I was somewhat apprehensive when approaching the movie. I had, after all, dived into it after seeing the original show for the first time, nearly ten years ago, and my memories of it were not so great.

Right out of the gate the movie gets one thing right - it's not trying to crunch 26 episodes worth of plot into 98 minutes of screen time, instead it tells a fresh story that takes the bones of what came before and re-shapes them into something more digestible, though the result does feel slightly rushed. The rest of the changes and, shall we say, adjustments are less successful. For the first forty five minutes or so the movie is actually pretty good, a pacey and interesting re-interpretation. However, it suddenly slams its foot down on the accelerator, as if the producers realised it only had another forty five minutes to wrap things up and too much to get through. This leads to things becoming considerably choppier, with the narrative jumping around to get through as much as possible. The thing that gets hit hardest by this is, criminally, the most important part of the Escaflowne story – Van and Hitomi's relationship.

Before I get into this rant I will point out I am aware of the difference between having multiple episodes to develop an on screen pairing, and the more constrained run time of a big screen outing. However, the mishandling of such a key factor here is inexcusable. For the first half of the film our leads have only one scene together, which ends with Van threatening to kill Hitomi. He then sulks in a corner until she is (mild spoilers) kidnapped. Once he stages a rescue the pair instantly fall in love, and both of their prior characterisations are over written. This sees Van and Hitomi becoming much nicer and more open people. The reason for the change is utterly ham fisted and feels so unnatural I honestly thought that my Blu-ray player had skipped ten minutes. This is a crippling blow to the main story, and therefore the rest of the plot.

As I've hinted at before the characters we get in this movie are very far away from their TV series counterparts, so much so that it’s quite jarring for anyone already familiar with them. Fitting into the darker tone presented here we have two leads who are crushingly depressed, aggressive, and closed off - making them difficult to like. This extends to the rest of the cast too, but they are given so little screen time that it really doesn't make much of a difference. Although the film does give virtually everyone from the series a role of some description, apart from one major villain - which came as a slight surprise to me given the other faces that popped up.

The animation on show here is mostly fantastic, delivering well designed characters as well as a beautifully developed and visually fascinating world - which drips with Asian influence, giving it a totally different feel to the series. This extends to the action on show too, in particular Van's opening assault on a black dragon aircraft - which is a stunning blur of blood and motion. The mecha action which makes up part of the climax is less successful, feeling oddly choreographed and being over far too quickly. Speaking of action, the blood letting has been markedly upped here, with heads and limbs regularly being lopped off. This upswing in gore sits fine within the grittier Gaea the movie takes place in, but still feels odd to me. While violent, the original show was never this gleeful about it.

The legendary Yoko Kanno returns to do the score, meaning we get some of the original themes returning as well as some new music to fit the tone of this movie version. Most importantly we get her famous Vision of Escaflowne, and really what more do we need?

If you are a fan of Escaflowne I would recommend this movie to you despite it being very much a film of two halves. If you have never seen Escalfowne I would urge you to drop everything (even this review) and go watch the TV series, then see this movie as a sort of alternative universe version. As you will probably enjoy it more with the knowledge that the superior original is out there.

Interviews with the Japanese cast, Anime Expo 2000 interviews, premiere footage, and trailers in both English and Japanese.