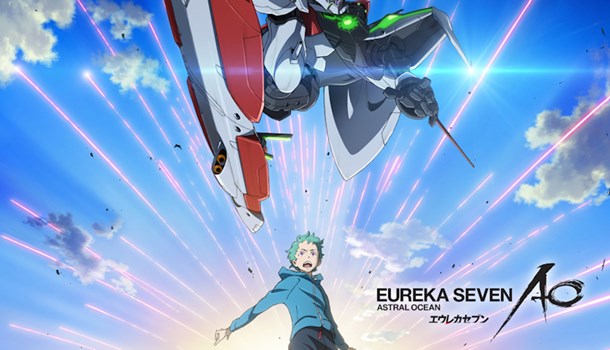 Almost a decade has passed since the young lovers Eureka and Renton graced our screens with their sky surfing mecha, Nirvash. Finally, a sequel and a continuation of the lovers’ story comes to our screen. Will it transcend time, space and dimension to deliver the same impact as the original series? Let’s find out!

It all begins in Okinawa in the near future. This world, unlike that which Eureka Seven was set, is recognisable as the world we live in today, with only a few differences, most notable the presence of Scub Coral. In this world of the future, the Coral is harvested and used as an energy source and is understood as both a resource and a danger to the future of mankind. Groups exist around the world to both utilise and destroy the Coral when it emerges, as well as trying to protect the world from the Coral and the horrors that emerge. Ao Fukai, a child abandoned by his parents when he was young, lives in the shadow of a Scub Coral bloom. When the Coral is attacked by an unknown organisation, Ao finds himself inadvertently caught in the middle of the battle between the military, this organisation and... something else. During the battle, a mech unit is lost by the military and almost lands at Ao’s feet. This unit is the Nirvash, also known as the Mark 1 and the archetype for the worldwide resurgence of IFO mecha. Like Renton before him, when Ao enters the cockpit of the unit he finds it to be responsive... and that’s when all his troubles begin.

It’s not exactly normal for one’s hair and eye colour to change spontaneously, and it seems to be limited to those who have certain genetics. Perhaps some genes inherited on the mother’s side? When Ao awakens after encountering the Nirvash, he finds his hair is now turquoise, his eyes are a reddish hue and he finally figures out who his mother actually is. But, we knew that already. Ao Fukai is the son of Renton and Eureka.

With that mystery out of the way, we can now continue onto what makes AO (an acronym for Astral Ocean) worthy as a successor to Eureka Seven. The original was a tale of love, family and remains one of the best examples of someone coming of age, gaining responsibility and changing the world. One of the hallmark features of the original series, and one that continues into AO, is the use of tragedy. Although Eureka Seven had one of the happiest endings in anime, everything clearly did not go to plan otherwise Ao would have not ended up almost 10,000 years in the past, without knowledge of his parents. Eureka Seven was also highly political, showing the impact a single person can have on the world, and this theme continues into AO. Ao, because of his new found identity and ability to pilot Nirvash, becomes a part of the international organisation Generation Bleu whose remit it is to control the spread of the Scub Coral and the creatures that emerge from it, the “Secrets”.

Ao is not alone either, and one of his motivations to put himself into danger time and time again is the need for acceptance from his childhood friend and crush, Naru. Naru has her own connection to the Coral. Since the blooms began, the spores and particles in the air have caused her pain. Through Ao and his encounters with the creatures borne from the Coral, she is inadvertently brought into contact with the Coral and its underlying intelligence, becoming something else in the process, and is tragically split from Ao while all around them people die, the world continues to change and the face of the Earth continues to be scarred by the Coral.

Like its predecessor, Eureka Seven AO pulls no punches as it constructs a universe where children are used as cannon fodder - part of a global machine to control the Coral and its resources - and where destinies have been unwittingly changed by the meddling of those outside of the normal time space continuum.

Oh, and the mecha are rather cool as well, though with a lot less “surfing” than I would have expected. I am actually trying not to actually go too much into the mecha design here; the original series mecha design was by Shouji Kawamori, and he does have his hand in some of the mecha design and inspiration for AO with the main Nirvash design being his handiwork, while the designs for the other IFOs are inspired by his work. They are very pretty. I will leave it there.

One of the issues with the original Eureka Seven series was that the pacing over its fifty-one episode length was rather slow at times. The middle third of the series, although beautiful, was hard going thanks to the prevalence of filler episodes and scenes which did not contribute to the overall storyline. Eureka Seven AO has almost the opposite problem - this first part contains the first thirteen episodes, covering the first four arcs of the series, and in that time the pacing is relentless. Apart from a couple of minor scenes with Generation Bleu involving a sloth called Noah, the filler is minimal and you are bombarded with facts about the universe from the first minutes onwards. This actually can be quite exhausting during a marathon viewing session, but it is nonetheless manageable.

As per the original Eureka Seven, the English dub isn’t great. I personally found the few episodes I watched with the dub to be grating and quickly switched back to the Japanese dub which I was acclimatised to during the first airing of this series back in 2012. I do recommend you do the same, but this is always a personal preference.

Just like the original, the same team who created the beautiful world within which Eureka Seven was set, at Studio BONES, were retained to create the universe for AO. From an artistic point of view, it’s gorgeous and definitely worthy of a high definition release - something which we aren't party to here in the UK.

Eureka Seven AO is a sequel to a successful series, and it continues the story of Eureka and Renton through their children as they make their way in the world of 2025. For fans of the original series, AO is a worthwhile successor and is a must have item. Unfortunately for the UK we will only receive a DVD release rather than the Blu-Ray version available in the US and this, I think, is a shame in this instance as the art direction for Eureka Seven AO is sublime.

8
A must have for fans of the original series.