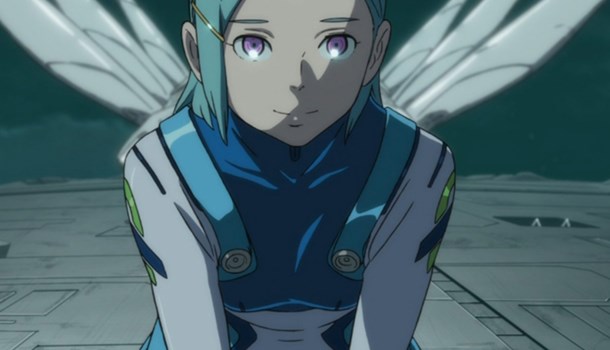 The second half of Eureka Seven: Astral Ocean is upon us. After the first half, the board is set for a fight for the future of Earth - it's Scab Coral versus the Secrets, Generation Bleu versus everyone else and, in the middle of it all, sits Truth and Ao.  The proverbial excrement has finally gotten real.

Eureka Seven AO has so far been the story of a world rocked by the appearances of the Coral and the corresponding defence mechanism, the Secrets. Both of these beings have had their horrible way with the world for their own reasons, leaving the planet enclosed in an alternative history where geopolitics is different, and the world relies on the power of Trapar, microscopic particles produced by the Coral rather than, say, nuclear energy. There are some who know of this true world - a reality where the coral never came to Earth and contaminated the timeline of the planet to the point where they are driven mad with this knowledge. This second half brings with it the truth of the planet, showing how the world in Eureka Seven came to be, how the legacy of Eureka and Renton came about in the past, how two lovers sentenced a universe to death, and how those two strove to correct their mistakes.  At least, that’s the theory.

Eureka Seven AO has entered into a territory which very few series, or books, get right. Shortly after the revelation that the Secrets are not actually humanity’s enemy and are in effect the universal “immune system” of the trans-dimensional Scab Corals intent on understanding and assimilating everything. Ao “inherits” a device borne from the quartz which transcends reality itself and allows for the world to be changed in the same way that the Coral can travel through time to escape from the Secrets created to eliminate them. It sure is handy having a nice escape mechanism, even if it does completely stuff up the world.

The following twelve episodes bring with them a somewhat confusing narrative, except for the final OVA episode, which is an exercise in crossplay. No, really. Ao is forced to dress up as Eureka while on a whistlestop tour of Switzerland. Not quite the ending you would expect after the climax of the story in episode twenty-three. Before then, the story is more of a mish-mash of beliefs - who is right versus who is wrong. Who gets destroyed? Who gets the boy, the girl with the pink or blonde hair? Who comes from which world? Which world is the true world?

At this point, I’ll stop trying to summarise the series any further, as anything I could possibly say would be a spoiler and would take the pleasure away from trying to work out the brain-bending story out for yourself as it is not easy, at least in the first viewing, to work out all the peculiar nuances. I will at least state that everything does work out in the end, and actually the ending is rather sweet, although it has nothing on its parent. Then again, I'm not entirely convinced you can beat someone engraving a love note on the surface of the moon for a gooey happy ending.

In the review of its first half I clearly stated that this is “a must-have for fans of the original series”. I will now take that one step further - due to the revelations in the second half of the Eureka Seven AO, the only way that the second half makes sense is for the original series to have been viewed. Secondly, the majority of the little musical tributes won’t be appreciated without prior knowledge. One of the little musical delights, other than Ill’s contributions, is a cute remix of Denki Groove’s Niji in the final moments. The only thing which would have made me grin more would have been another lyrical performance by Nirgilis. But alas, it wasn’t to be. Eureka Seven had an interesting relationship with its soundtrack, which is, in my opinion, still one of the finest to have graced the animated world. Its successor, although blessed with some classics, does not come close to the energy and quality of its parent.

These comparisons are becoming a bit repetitive though - it is clear to me now that as beautiful as the series is, it’s not very accessible. The series still has many of the original harem flavours which I was initially ignoring which were used to a greater extend in this second half. What did work more than I originally expected was the relationship between Ao and his parents, and the way that Eureka interacted with the other characters. Eureka’s disassociated form helped drive the narrative on, push it in the right directions when it gets bogged down, and deeper down we are all fans of the older looking Eureka. Like a fine wine, she has improved with age.

What we have been left with is eleven episodes of non-stop action as the entire universe constructed within the first twelve episodes deconstructs itself due to philosophical quandaries and mixed opinions as to whom should be removed from the universe. Every episode brings a new fight, new allegiances and another child having a dramatic episode. Sounds oddly familiar, doesn’t it?

To summarise, these final episodes ending the Eureka Seven universe certainly add to the depth of what came before. Astral Ocean tells the story of what came after Eureka and Renton, and gives us hope that they did, and will, continue to live happily ever after. As for Ao, Naru and the girls of Pied Piper... well, you will see.

7
Not as strong as its predecessor, but still a very good series.