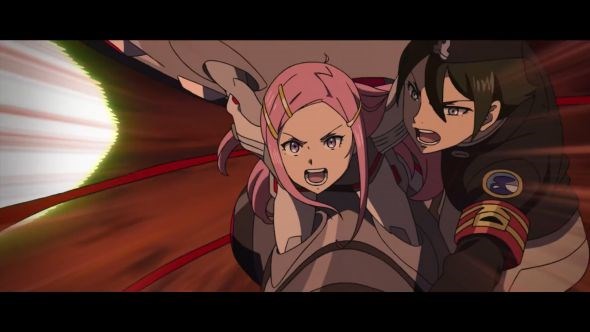 As some of you may remember from our 2017 Scotland Loves Anime coverage we reviewed the first of a trilogy of new films in the Eureka Seven series, Eureka Seven Hi Evolution. To put in the kindest of terms I was not a fan of the film at all. I left that film feeling confused, angry and emotionally drained. Going in without having seen Eureka Seven's TV series I was led to believe that it was not necessary to see the series as the film will catch newcomers up to speed on the intricacies of the franchise. I was wrong. Before seeing this film, subtitled Anemone. I decided to go in blind again using only the previous film as a guide for this one. That was also a mistake.

Eureka Seven Hi-Evolution: Anemone places the character of Fuuka Anemone who's father was a soldier who died a few years previously. She is now a soldier herself and pilot of a mech that seems to fight against the Nirvash at various times throughout the film. Regarding this film I've had to keep the synopsis brief due to not wanting to spoil things and this is mostly what I understood from the film. The main problem, for me at least, having not seen any of the Eureka seven TV series, is that the film assumes you have a very deep understanding of Eureka seven already. With films based on franchises they tend to do this weird dance where the flit the line of assuming the audience has either full knowledge or no knowledge of things. Done by explaining key terms, talking about past events or reminding the audience who the characters are through exposition. This film does none of that choosing to step fully into a story that is already playing out.

At time this makes the film feel like filler. Adding in extra footage and context to an already existing story. This is most apparent during the battle scenes in the film where it will shift aspect ratio into 4:3 to mimic the TV series. Whether this is actually reused footage or just footage done in a similar style to the TV series is not made as clear as it was in the first film. At times I felt like an outsider watching this film. Like I was outside in the cold weather, staring into a shop window and seeing all the happy customer buy into what was on display.

This sentiment carried across due to audience reaction to the film. After talking with various people, all of the ones familiar with Eureka Seven either enjoyed the film or loved it. Feeling like the film gave more context to things but also there is one aspect of the film that totally re contextualises the previous film and the entire franchise. I won't go too far into things here as I feel like Eureka Seven fans should definitely see this film to make sense of this. For me, as someone who only has the basic premise of Eureka Seven and the previous film to go on. This film left me bewildered. If you've only seen the previous hi-evolution its best advised to watch the TV series before viewing this. That is my plan at least.

I know this review may seem odd to read and may not give much clarification on what the film is about. But I honestly can't tell you. I know I've been vague and negative but that’s how this film left me. As to not completely destroy it. I will say the new footage looks really cool, especially the battle scenes involving giant mechs. The music is great and for fans invested in this franchise it does do interesting things that will lead the way into what is hopefully an interesting and complete finale in the next film. For those who are not invested in the series, it is best avoided.

4
A film for fans of the franchise. Complete nonsense for everyone else