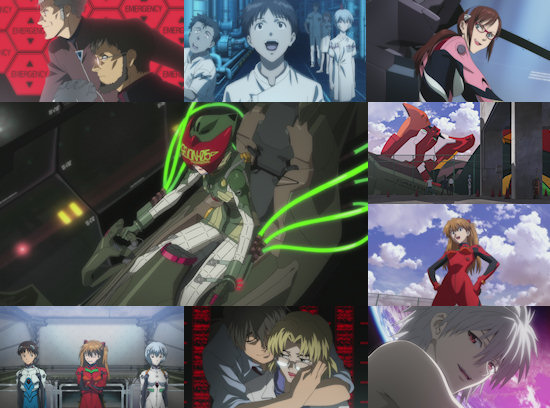 It's been almost a year now since I first got to see the second Rebuild of Evangelion movie in its Evangelion 2.0 format courtesy of a screening at the BFI Anime Weekend in London, and since that time I've watched it again numerous times via other theatrical screenings and its Japanese Blu-Ray release.  It probably says more about the film than anything else I'm about to write that, despite all those previous viewings, I still clutched UK Anime's review copy of Manga Entertainment's Evangelion 2.22 release to my chest upon its arrival and simply refused to let it out of my sight until everyone else backed down and let me take up reviewing duties for it.

If the first movie in this four film series that reboots the franchise, Evangelion 1.11: You Are (Not) Alone, suggested that the entire project was going to be little more than an attempt to give the classic anime TV series a 21st century makeover for a new generation, then this second film dismisses any such thoughts utterly within moments of its introduction.  Indeed, Evangelion 2.22 wastes no time at all in introducing us to a brand-new Evangelion pilot whose name isn't even mentioned to the viewer until her name crops up in the end credits - you'll be wanting to make a mental note of her particulars however, for her sporadic appearances throughout the film punctuate some of its most important moments.

It isn't just a new pilot that Evangelion 2.22 throws into the mix instantly, as the opening to the film also delivers a swift one-two punch of action set pieces; the first featuring our mystery girl pitted against an Angel in a clunky prototype Evangelion unit, before we switch back to Japan and the appearance of the seventh Angel before its speedy dispatch by a certain Asuka Langley Shikinami.  Yes, her surname might have changed but Asuka is back in the thick of things here, and as conceited as ever to boot - although that said, she isn't quite the character you might remember from her television outings, as we'll discuss later.

After thrilling the viewer with that sublime double-whammy of Angel-fighting action, the movie finally finds some time to take a breather and explore its characters and environment - Asuka's appearance naturally features heavily here as she bounces off Shinji, Rei and Misato, while Ryoji Kagi also makes himself known throughout the movie as his efforts are sold to the highest bidder when he isn't ploughing his own furrow.  These developments are whisked along on waves of alternating bouts of comedy and character interaction, and punctuated by another breath-taking effort to stop an Angel from wiping out humanity as we know it, this time via an opponent who is rather more familiar to fans of the TV show.

We really have to stop and discuss character development at this point however, as it serves as arguably the biggest departure from the Evangelion of the 1990s.  While the original shows main characters (and particularly its roster of pilots) were memorable in their own right, their characters remained broadly static as the series progresses, with revelations about their circumstances and pasts only serving to reinforce the motivations of each individual.  In this regard, and following the trend touched upon in the first movie, You Can (Not) Advance is hugely different - all of its characters grow noticeably during the duration of the film as its subtitle alludes to, and this in turn works wonders in terms of making its individuals feel both more human and easier to empathise with.  Yes, Shinji can still be a spoiled brat but his reasons for doing so feel utterly valid; Rei is still a "doll" but one who is learning the importance of human emotion and the simple pleasures which come from being around others; Asuka is feisty, arrogant and rude but allows others to close the emotional distance she exhibits towards them far more readily.  Put more simply - Evangelion 2.22's pilots feel more like real teenagers than caricatures of one.

After a first half where things almost seem too relaxed on occasion, the second half of Evangelion 2.22 is where things really kick up a gear, complete with all of the political and organisational machinations that you might expect from the franchise with NERV at their centre.  Against this backdrop, the film hits the viewer with everything that it has in its arsenal - visceral action, uncompromisingly horrific scenarios that send a shiver down your spine and an overflowing of emotion all lead up to a final half hour which almost delights in destroying everything from the viewer's expectations through to their sense of sanity.  You didn't really think Hideaki Anno was going to waste another opportunity to mess with your head, did you?

It's really the second half of Evangelion 2.22 that showcases what this new series of films is all about - it's a relentless and incredible spectacle, pure and simple, and it's one that simply doesn't get anything wrong in those terms.  Never mind sitting on the edge of your seat, as the end credits roll you'll realise that your fists are clenched, your eyes wide; you've just forgotten to breath or blink for the past hour, it seems.  If the visuals of the first movie impressed you, then You Can (Not) Advance will drop your jaw to the floor with its almost perfect melding of CG and traditional animation techniques - it's clear that this film was denied nothing in the pursuit of animated perfection, and given the time and money afforded it this is undoubtedly the best animated spectacle you will ever have seen as it builds up Tokyo III and then systemically destroys it in a riot of blood, guts and giant bio-mechanical creatures.  This is backed up by an equally terrific soundtrack - Shiro Sagisu again works his magic and creates background music that feels both fresh and fitting (even if some of it is lifted directly from His and Her Circumstances and given a dust-off), while Studio Khara do a number on the viewer by outfitting the film's two most intense scenes with light, emotional songs about friendship and progress.  The first will make you recoil in horror as it sharpens the knives on what is already a shocking scene; the second will move you close to tears even if you aren't entirely sure what on earth is going on.

Of course, music and visuals will only take you so far, so we really have to explicitly mention that this movie is a fantastic work in its own right via a script that knows when to ease off the throttle and when to put it hard to the floor, timing everything it does almost perfectly for the maximum impact - its slow, personal moments only serve to increase our discomfort when the characters we've been close to are pushed into unbelievable peril, yet those moments of threatening apocalypse are necessarily lightened by those occasional moments of cheerful goofiness.  This sense of light and shade rarely puts a foot wrong across the course of the film to create a viewing experience that is as equally satisfying cerebrally as it is a feast for your eyes and ears.

In terms of Manga Entertainment's UK release, we were lucky enough to check out the Blu-Ray version of the movie, and even more luckily for me I can sum it up in a single word - beautiful.  Given the care and attention lavished upon the film itself by its creators, this digital transfer similarly gives the movie the love it deserves, and it absolutely looks the part from beginning to end coupled with a Dolby TrueHD 6.1 audio track that threatens to shake your house down during its more destructive moments (or, as my next-door neighbour put it, "there was a lot of screaming").  As per the first film, the original TV anime's English dub cast is reassembled to decent effect, although the dub felt a little too stilted in places for my liking at times.

Even in terms of extras we can find little to complain about in this UK release - the omitted scenes included on the disk are very rough early cuts but interesting nonetheless (one cut scene in particular paints an interesting picture of Rei and Ritsuko that is missing from the final film), the US dub team's commentary is an exhaustive affair, and the "making of" feature gives some wonderful insight into the animation's creative process.  Throw in a shed-load of trailers and the hardcore Evangelion fans have more than enough to coo over.

As an anime fan that was finally dragged outright into the wonders of Japanese animation and what it can do as a story-telling medium by Neon Genesis Evangelion, I am admittedly biased in my thoughts towards the franchise - something which can be a blessing or a curse when a series you love gets "rebooted".  I have to confess that my first viewing of Evangelion 2.0 left me with a slightly unsteady opinion of the film - it leaves the viewer (and particularly those who have seen the TV anime) with so much to take in and digest it's difficult to know where to start.  It's this initial response and how my feelings towards the film have changed over time to the point where I can't help but regard it reverentially as a borderline work of genius that leads me to say that Evangelion 2.22 is not a film to watch once and then allow to gather dust on a shelf.  Come back to it a few months later, watch it again and chew over what you've just seen a little more - I almost guarantee you'll find new things to like or ponder, and discover new aspects to this visually and emotionally busy movie that you perhaps missed the first time around.

Thankfully, this top-notch presentation of You Can (Not) Advance for a UK audience makes watching the movie over and over again nothing short of an outright pleasure.  Go out and buy it (on Blu-Ray if you can, this is one film that absolutely deserves a High Definition treatment), watch it over and over, prepare yourself for the third movie with it's as-yet unannounced release date - oh, and whatever you do, don't hit the "stop" button until after the films end credits have finished rolling...

English and Japanese Dolby TrueHD 6.1 audio, English subtitles. Extras are made up of a US cast commentary featuring the English dub's ADR director and voice acting cast, the "Rebuild of Evangelion 2.02" feature containing storyboards and production details, an alternate version of the film's closing "I Would Give You Anything" scenes, trailers, TV spots and a handful of omitted scenes.

The Collector's Edition of the film also features a bonus DVD containing the 2.0 release of the film and a twenty-page booklet.

10
A visually stunning film coupled with a mind-alteringly incredible script and story - Evangelion is back, and it's as unforgettable as ever.
COMMENT AND DISCUSS
blog comments powered by Disqus