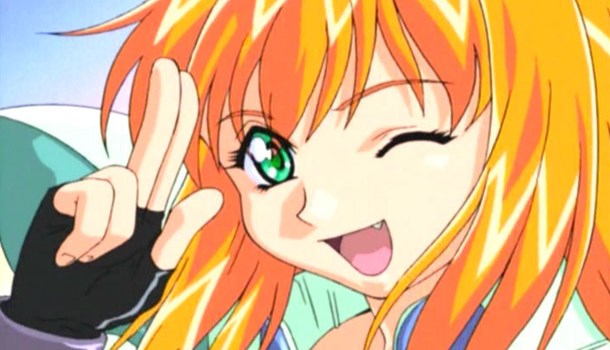 If you haven’t heard of Excel Saga, and are expecting it to be serious, TURN BACK NOW. It is probably one of the most screwed and insane anime comedies ever to exist.

Created in 1999, the anime of Excel Saga takes Koshi Rikudo’s manga of the same title and runs riot with the plot, spoofing several genres from B-movie war films to science fiction with an animated Rikudo giving permission for the show to be put in these formats.

It’s the story of Excel Excel, agent of the secret ideological organisation ACROSS, under the command of Lord Ilpalazzo. Her mission: to conquer the city of F on the F prefecture in the name of Ilpalazzo and ACROSS. Helping (or sometimes, hindering) her quest is Hyatt, her terminally anaemic partner and Menchi, Excel’s pet dog/emergency food supply.

Along the way we meet the likes of Watanabe, Iwata and Sumiyoshi, Excel’s next-door neighbours who gain more importance as the series continues; immigrant worker Pedro; the omnipotent and selectively omnipresent Great Will of the Macrocosm (or Will-chan for short); the Puchuu, despicable and horrifyingly adorable aliens from Mars and Nabeshin, the self-insert of the director with the massive afro. A word of warning concerning the ADV dub: if you didn’t like Jessica Calvello as Mink in DragonHalf, then you’ll hate her take on Excel, as she takes the screechy hyperactive talk to a new level. Fortunately, it is fitting with the series.

The best feature on the disc, without a shadow of a doubt, is the AD-Vidnotes. When activated, little dialog boxes with Menchi’s face pop-up on screen to inform the viewer of in-jokes, references and play on words that are either vague or are lost in the translation to English dialogue. The feature itself is worth the price of the disc.

8
All in all, if you have a warped sense of humour like I do, you will find Excel Saga an absolute hoot. I guarantee it.
LATEST REVIEWS