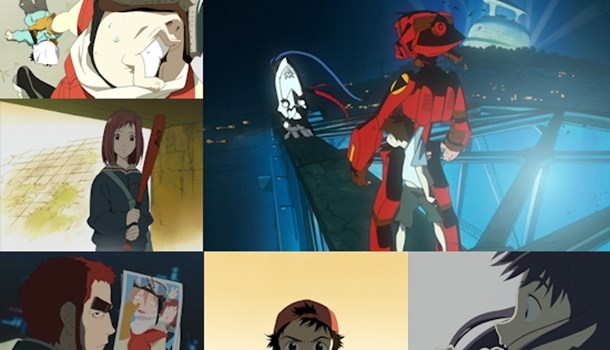 What is there to say about GAINAX's FLCL (aka Furi Kuri, aka Fooly Cooly) that hasn't been said already? This is my introduction which broadly translates into "I still don't know exactly what this series is about, so cut me some slack" - however, we do know that the series is now coming to Blu-Ray courtesy of MVM Entertainment, so is this a perfect excuse to revisit this wacky classic?

After introducing us to its town where nothing interesting happens, FLCL treats us to a few solid hours of nothing but interesting things happening. The catalyst for all of this is a rather unfortunate meeting between our 12 year-old protagonist Naota and Haruko Haruhara - or rather, a meeting between Naota's face and Haruko's moped, which leaves the poor lad unconscious and with a hefty lump on his head... and by hefty lump, I mean massive lump out of which a robot sprouts. If ever you doubted the veracity of claims that FLCL is insane, this first episode certainly does a good job of not only backing up those claims but surpassing them.

With the birth of their new robot friend comes a number of ever-more crazed adventures, all of which revolve around Haruko in some shape or form as she draws all and sundry into her unique brand of lunacy, which ultimately proves to be a hunt for a particularly powerful interplanetary being. Not that this really matters, as the series has other fish to fry than galactic politics.

There are two aspects to FLCL's genius, the first of which are its visuals - even over a decade after its arrival GAINAX's million miles an hour style of frenetic goings-on, punctuated by some quiet and introspective moments that are all the more powerful on account of the chaos around them, feels utterly fresh and unique, and few shows have ever really recaptured this particular brand of magic.

The second reason why the show succeeds so admirably is its characters; it would have been easy to pack episodes with cardboard cut-outs that are simply ciphers for whatever madness transpires, but the main cast of FLCL are wonderfully fleshed out, with their own pasts and issues which arise from those often painful memories. If FLCL is about anything, it's about growing up and moving on in the face of heartbreak and disappointment, and taking experiences in your stride as part of youth's rich tapestry rather than being trapped in the wake of bad experiences.

Even if you don't agree with that moral to FLCL's story, such is the sheer pleasure of the show's viewing experience that it doesn't really matter - with that iconic soundtrack by The Pillows which never gets old alongside those eye-catching visuals, this is a series that you can sit down and soak up without worrying about where its narrative is headed and what it's trying to say to the viewer.

This brings us to the million dollar question - how is the viewing experience offered by this new Blu-Ray edition of the series? In terms of video quality, things largely look great - crisp and clear throughout, although some scenes upscale less well than others and looking closely will allow you to pin-point moments of aliasing. Indeed, for some reason episode three in particular seems to upscale less well than the other episodes to stand out as an example of FLCL on Blu-Ray at its worst, although even here it's a definite step-up from previous DVD releases.

Having already mentioned how great the show's soundtrack is, it sounds as good as ever here - untouched in its original stereo format but enjoyable via both English and Japanese language tracks. Although we'd probably have argued for some slightly better presentation of its subtitles - thicker text outlines or a different colour would have been handy during those infamous quick-fire manga-style sequences where subtitles become tough to read - the overall presentation is perfectly acceptable, and this Blu-Ray also throws in director commentaries for each episode alongside a bunch of music videos and outtakes to provide a pleasingly comprehensive package.

If I had one concern before sitting down to watch this series on Blu-Ray after a fair few years, it was that FLCL would finally be starting to show its age. Far from it however - yes, it feels very different to pretty much anything else you'll see come out of Japan these days (with the possible exception of Kill La Kill, which is directed by FLCL's animation director), but that isn't to say that it feels dated in the slightest. Instead, FLCL is unique and remains a fascinating and fun experience to watch over a decade later, and this Blu-Ray release offers an opportunity to see it all in the kind of crisp, clear manner that it deserves.

Whether you revere it as a classic or have never seen it before and want to know what the fuss is all about, this is one Blu-Ray that really deserves a home on the shelf of every discerning anime fan.

English and Japanese stereo audio with English subtitles.  Extras consist of director commentaries for each episode, music videos from The Pillows, outtakes, a textless closing song and trailers.

9
Even over a decade later, FLCL remains a fresh, fascinating and fun viewing experience that every anime fan should partake in at least once.
LATEST REVIEWS