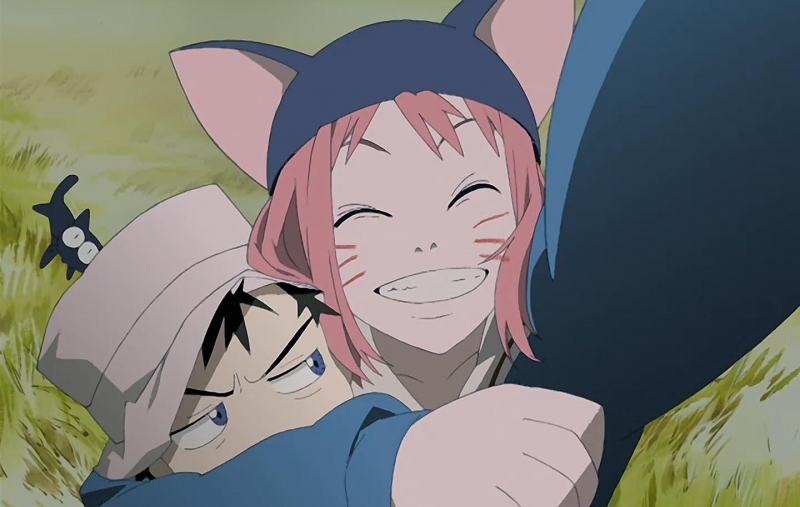 Right, here is the rant. It’s been 8 years since FLCL first appeared in Japan. It’s been an incredibly long time since the US saw a DVD release. It’s taken this long for FLCL to finally get to UK shores, so why has it taken so long to get here? The mind boggles. (It's the cost of licensing - know-it-all Ed)

But never mind that now, FLCL has FINALLY made it to the UK, so next time you're at an event be sure to hug the guys on the MVM stand 'cause that’s the very least you can do to thank them for the wonders we are about to receive.

Ahm.. anyway… on with the review.

FLCL is the story of twelve-year-old Naota whose tranquil life is shattered by the arrival of Haruhara Haruko. She just happens to make her arrival by running over Naota on her Vespa, followed by a quick whack to the head with a Rickenbacker 4001 bass guitar. Ouch.

In amidst all this waksiness, Naota also has to deal with the attentions of his absent brother's girlfriend, the sultry and sexually aggressive Mamimi. Poor soul...

And lets not forget the robots that have started to grow out of his head since meeting Haruhara... Tough times indeed!

It's been 8 years since the original airing of FLCL, but even today it still stands proudly as a shining example of something only possible in anime. The sheer insanity of processings would have cost a fortune in live action, but here Gainax lays out it's nuttiest ideas, and imagination is the only limit. And after watching this, you'll see the bar is set pretty damn high!

After all this time the animation is still top notch, the soundtrack is one of the best in any anime (more on that in a moment), the characters are still as interesting as ever and the sheer energy of the entire thing is incredibly entertaining. Everything about this volume demonstrates what a series should do to be top class.

Lets explore that amazing soundtrack a little. Most of the songs have been composed by the band The Pillows who, after FLCL’s release, gained quite a large following in the West and it’s easy to see why. The songs provided by The Pillows, as well as Shinkichi Mitsumune, fit so well into each scene that you actually do start tapping your feet while watching the episode. Each track also manages to empower every scene, adding the needed extra bit to make the insanity just that much more fun to watch. One of the best examples is the use of Little Busters in the fight scene at the end of episode 2. It's an absoloute classic scene.

It’s not only just the music. The animation and style of FLCL is unique. Mixing standard anime-style with seamless CG and bullet time effects (remember this was a time before it became over-used) and even semi-animated manga pages adds punch to an already stunning volume. The mixture of styles mix well with the manic pace of the storyline and never seem out of place in the context of what's happening. If anything, it amplifies what the episode is trying to get across and just makes the viewer sit up and take even more notice of what is going on onscreen.

Let’s not forget the characters either. While Naota is the standard loud-mouth punk trying to make sense of everything, his normality is a much needed anchor for FLCL. Without him, the off the wall antics of Haruko and Mamimi would lose their impact. Haruko is fantastic in an insane cartoon sort of way, while Mamimi is the ditsy character you can’t help but love to pieces...

So this is all well and good right? An easy 10 out of 10 if you have ever seen it. The DVD even contains a decent amount of extras (as mentioned below). If you haven’t already scrolled to the bottom and looked at the score, you may be asking why this volume hasn’t got a 10. The simple reason is the amount of FLCL you get for your money. Volume 1 only contains two episodes of the series. Even back in when FLCL was original released, this was seen as a steep investment into the series. So FLCL gets a point knocked off it for being cheap on the number of episodes given on the disc.

Apart from that one sore point, there is no reason why you haven’t already brought it. Many would of already picked up the region 1 copies, but for those new to anime or still not tasted the wonders of FLCL, then you have no reason not to now. FLCL is a classic anime in every sense of the word and you would be doing yourself an extreme disservice not owning this legend.

This first volume of FLCL even has a healthy amount of extras too:

Also, there is director's commentary complete with subtitles to watch once you’ve gotten over the excitement of watching the two episodes.