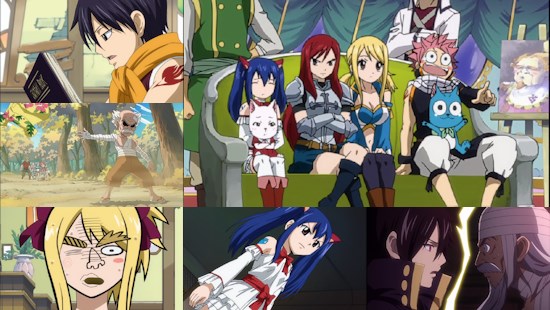 After that long, long wait for Fairy Tail to return to the UK on home video, the releases are now coming thick and fast. Part 10 is now well and truly with us and review discs for volume 12 are already sat in my alarming pile of things to watch, so there's no time to waste in checking out this batch of episodes.

While the last volume brought the main thrust of its particular story arc to an end, that doesn't mean we're done with events on Tenrou Island - there's some substantial fallout from Grimoire Heart's efforts, but things are also about to take a decidedly surprising turn for the Fairy Tail crew too. It's hard to talk about most of the content of these discs without tackling parts of this twist, so if you're heavily spoiler-averse then look away now. No peeking, time to close this browser tab...

So, just as everything seems to be done and dusted, Fairy Tail find themselves faced with a rampaging black dragon named Achnologia - a threat so great that even the guild's master and his impressive powers seems to pale in comparison to this new threat to Tenrou Island. The island is wiped out, and there are seemingly no survivors in the aftermath of this brutal attack. From here, we fast forward seven years, into the year X791 - just in time for the Fairy Tail crew that we all know and love to return from their long-enforced holiday.

To be honest, this whole set up is really rather underwhelming - the way the series pulls the rug out from under the viewer is fantastic and leaves you wondering where it plans to go next, then fast forwards us into a situation that allows it to both introduce new characters and shift things around existing ones substantially. A story arc - or even a good handful of episodes - focusing on that could have been terrific, but instead the series quickly gets cold feet and so drop Natsu and company back into proceedings as soon as possible.

In fairness, this volume does still manage to make some interesting use of this premise, exploring how so much has changed while time hasn't moved on for the major players in the cast, and this in turn provides some of the emotional and impactful moments of which the series so often proves capable of alongside all of its goofy humour. It's also a theme that subsequent episodes in this set return to, just not as much as I might have liked to make full use of what is a marked change in the show that deserved more exploration.

This aside, this volume quickly moves on into some episodic fare which is mostly daft but fun, before bringing about the return of some old enemies with a new goal of their own to take us to the climax of this volume and leave us hanging (in rather an odd place it should be said) for the next.

Beyond that, everything else here is as you'd expect - the use of NTSC DVDs for this Funimation Entertainment release means it's a cut above previous PAL Fairy Tail releases in terms of video quality, and almost negates the frustration at the lack of a Blu-ray release. The show's English dub is still strong (albeit with a couple of caveats in the form of annoying new characters that crop up later in the volume) and its Japanese presentation with English subtitles doesn't exhibit any problems or causes for concern either. The only real disappointment is that this volume contains fewer episodes than is typical for the series - as mentioned, it doesn't even wrap up in a satisfying place to leave the end of a volume, which makes the choice of episode split feel decidedly odd as well as slightly compromised in the value for money department.

If you're a fan of Fairy Tail, then this certainly isn't a volume to avoid - indeed, its major plot points are absolutely must-see, and the general entertainment value of the series remains broadly intact as it'll make you giggle or occasionally prick your eyes with tears. The disappointment comes from the fact that you can't shake the feeling that it could have been so much better - brave moves that could have been seismic shifts in the series are reduced or backed away from, and the status quo returns too quickly to really luxuriate in the impact of the things it attempts. Put that aside however, and the Fairy Tail formula in a broader sense is as likeable as ever.

6
All of the elements of the Fairy Tail formula are present and correct, but this volume's failure to make full use of some interesting twists may frustrate.
LATEST REVIEWS