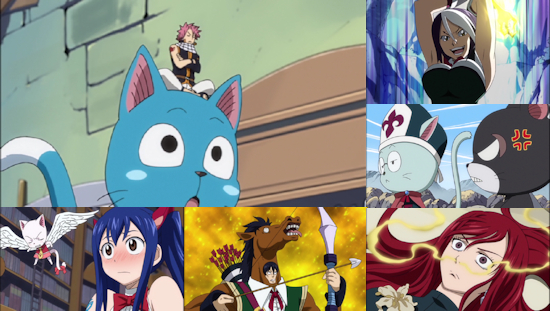 The previous volume of Fairy Tail did much to shake up the state of its world (at least for the guild itself), holding its primary cast in stasis for seven long years before sending them back out into the world. While much had changed as a result of this long period of inactivity, perhaps the most marked and moving element of the gang's return was the passing away of Lucy's father, which provided a powerful emotional crux to proceedings.

It's the aftermath of this particular event which hangs heavily over the twelfth instalment of Fairy Tail, as a memento from Lucy's father finds its way back to her courtesy of a mysterious girl. Normally, this kind of event would open the door to little more than a bout of reminiscing or introspection on everything she's lost, but of course this is a shounen anime adaptation that we're talking about so there's far more to this memento than a mere trinket - in fact, it may hold the key to discovering powers so great that they might endanger the entire world. You can probably guess the rest from here - Lucy is joined by her fellow guild members old and new on a quest to fulfil her father's final wish and save the world in the process, while faced with the ever-growing threat of other groups who want the powers at hand to themselves.

All of this gives Fairy Tail exactly the ammunition it needs to fulfil its now-recognisable but broadly enjoyable formula in concentrated doses - there's no shortage of silliness here thanks to some of Fairy Tail's ludicrous opponents and the plights that face our guild-going buddies, and also plenty of action to go along with it as the gang extricate themselves from the difficulties they face or go head-to-head with some increasingly dangerous opposition, including some familiar faces who have given themselves a new look as they emerge as a threat once more.

Ironically, the tried and tested formula on show here is almost too much to handle - traditionally, the series knows when to give the events at hand some time to breathe by shifting its focus elsewhere, yet the episodes contained here rarely find time to deviate from their action and comedy shtick to the point where the whole thing threatens to become overbearing. It feels a bit like eating your favourite breakfast cereal for every meal of the day - sure, you like the taste but when it's the only thing you eat with no variety in the meantime you soon get sick of it. I don't want to knock this volume overly for packing in its content - especially when it's the polar opposite of other shounen series which love to drag everything out ad infinitum - but at times watching these episodes can feel quite manic and leaving you wanting a break. Perhaps these episodes are best absorbed in small doses, rather than en masse as I did for this review.

Elsewhere, everything is as you'd expect within this release - the show's English dub continues to match the energy of its Japanese counterparts admirably and the localisation is a whole lot of fun, while this DVD release looks acceptable even if we still hanker for the cleaner, higher quality of a Blu-ray edition on a regular basis. Subtitles remain solid as per previous releases, so overall we have no major complaints here.

Come the end of it all, this is a slightly odd volume of Fairy Tail to sum up succinctly, and not just because it leaves us hanging in mid-story arc. It seems more than a little churlish to suggest that the episodes on show here are "too Fairy Tail", but that's how it feels at times because of the relentless nature in which they are delivered. I suppose you can take this feeling as a back-handed compliment - there's a lot of everything there is to love about the series spread across these two DVDs and that certainly can't be faulted... just make sure you take it slow and don't overdose on its goofy world, silly (and occasionally childish) jokes or eye-catching action.

6
Everything you want from Fairy Tail is present and correct here, but delivered at a break-neck pace which arguably reduces its efficacy.
COMMENT AND DISCUSS
blog comments powered by Disqus