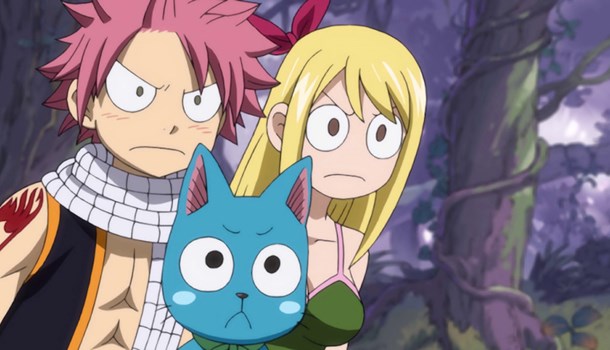 I was pleasantly surprised by the first volume of Fairy Tail. While I have been following the manga there was the worry that, like the D.Gray-Man manga, the anime would fail to live up to its heritage. Thankfully that wasn’t the case here, but does it keep up the high quality in this follow-up set?

Following on from the cliffhanger of the first set, Fairy Tail wizards Gray and Natsu come out of their recent fights with (rival of Gray) Lyon’s henchmen. Lucy herself tries to help using the villages that called Fairy Tail in the first place, but with Lyon’s henchmen on the move it’s going to require a lot to take out the bad guys.

With this second set, what I said about the first volume stands very much true here. While the fighting is ramped up to a major degree in this volume, the laughs at the very least are also there to help balance everything out. Again, the series does not take itself too seriously which helps it hugely.

I will say that the episodes in this set do dip in quality a bit. They are mainly stand-alone, so thankfully they don’t really impact the wider story much, but they do feel slightly like time wasting episodes, more so in particular the volume's body-swapping cliche type episode. At least the instalment featuring the origin of Happy gives a little more insight into the character itself. Thankfully, towards the end of the volume things pick up again, and once more we are left with the enjoyable/annoying cliff-hanger to sit on until the next DVD release.

Chances are that if you enjoyed the first set of discs, this will no doubt bring more of what you like. The animation, music and everything else are of a similar standard from the first set and again while it won’t blow your mind, it is entertaining none the less. The slightly weakening central episodes do dent this set a little, but it doesn’t spoil the overall enjoyment you will get.

The usual Japanese/English soundtrack with Japanese subtitles and some trailers- nothing special.