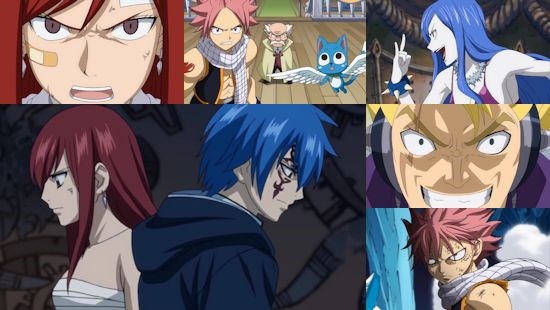 The previous volume of Fairy Tail left us in a precariously fraught situation, with Jellal on the cusp of causing all sorts of chaos thanks to his creation of the Tower of Heaven and his plan to resurrect Zeref, history's strongest mage who just so happens to also be decidedly evil.  Can the members of the Fairy Tail guild save the day?  Perhaps just as importantly, can they also do so while saving Erza, who plays a pivotal role in Jellal's plans?

As if all of that wasn't enough peril for the group to deal with, events outside of the Tower of Heaven also looks set to conspire against them as Siegfried pushes his own agenda to insist upon a resolution to blow the whole place sky high using an incredibly powerful magical beam, as a final desperate measure to ensure that Jellal's plan fails.  Of course, this being a shounen series, that act might just be playing into Jellal's hands...

With this particular story arc reaching its crux, Fairy Tail once again delivers what seem to have quickly become its trademarks - crazy battles such as Juvia being turned into a crazed rock star or Natsu and Gray having to clash against a man-eating owl (no, really, I'm not making this up), all of which are delivered with a smirk via a series that clearly doesn't take itself too seriously - an attitude which is undoubtedly to its benefit when it comes to delivering the goods.

Once this particular arc comes to a suitably satisfying conclusion (which heavily involves Natsu, of course), you could probably forgive the series for taking a bit of a breather and distracting us with some fun side-stories, but Fairy Tail seems to be having none of it as what looks likely to be just such a side-story quickly morphs into another major story arc.  This time around, the town Harvest Festival turns sour as Fairy Tail's place in the celebrations is turned into a coup by Laxus and his collection of personal bodyguards known as the Thunder Legion as the former makes a determined attempt to surpass his grandfather as the head of the guild no matter the costs.

The result of this is another entertaining story arc which sees Fairy Tail's male members set against one another in a test designed to wipe out any opposition so that Laxus can achieve his goal with ease - of course, no matter how intricate his plan things are never liable to be that easy, and this time around we're spared any cliff-hangers as this fourth volume also brings this particular story arc to a sentimental yet ultimately fitting ending - an act which also brings the episodes currently licensed by Manga Entertainment to an end, although surely they'll be picking up more of this series in short order.

Alongside all of this, the series maintains its colourful and bright aesthetic which works well as a whole, coupled with a decidedly limited but satisfactory soundtrack to keep things moving - it's as you were for every element of this volume in other words, right down to the inclusion of a couple of English voice cast commentary tracks to bulk up this release's value proposition.

To summarise this review quickly and succinctly then - volume four of Fairy Tail delivers more of the same, and this is in no way a bad thing.  Where some shounen anime can get bogged down in their own sense of importance and story-telling gravitas, Fairy Tail always manages to maintain a certain lightness of touch while also knowing when to tug at the heartstrings - something which it maybe doesn't do as well as when it's goofing around with over-the-top characters and conflicts, but it still proves sufficiently accomplished at it to make for an entertaining overall package, nonetheless.

English 5.1 and Japanese 2.0 audio with English subtitles.  Extras consist of textless opening and ending credits, and US voice cast commentary for episodes thirty-nine and fourty-five.

7
Another volume of powerful story arcs and often insane action should keep fans of this franchise more than happy.
LATEST REVIEWS