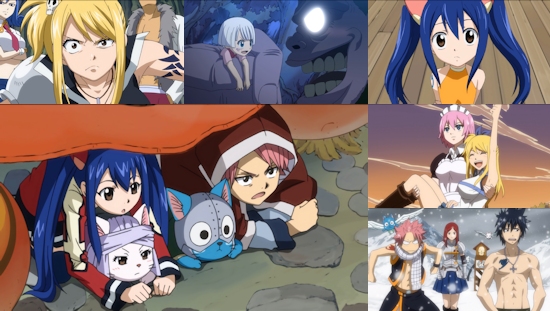 We're now very much back on track with Fairy Tail releases in the UK - a good thing too, as the series has continued to exhibit an expertly crafted concoction of comedy, drama and adventure that is yet to become tiresome in the slightest.

This seventh instalment of the show on DVD and Blu-Ray, consisting of thirteen episodes, begins with a sprinkling of random side stories - a guild flower viewing party sits alongside a search for a magical herb; Wendy finds herself sent out on a mission as part of an unusual line-up of guild members as an education experience; a guild road race encourages some friendly (and perhaps less friendly) competition amongst Fairy Tail's finest; and the return of guild member Gildarts brings both much celebration and an opportunity for some melancholy reflection from Natsu. With the exception of some time spent looking into Natsu's past, none of this has any real bearing on the major story arc to come, but that isn't to say that these episodes feel like a waste of time - they all exhibit the show's trademark sense of humour and fun, and each episode proves entertaining without threatening to outstay its welcome.

All of this, of course, is simply the apéritif for the latest in the show's main story arcs - to be honest the word "major" doesn't really do it justice, as ill tidings promising the imminent destruction of not only the Fairy Tail guild, but the guild's entire home city are quickly proved to be utterly correct. Thankfully, not everyone is obliterated by the phenomena which swallows up all and sundry, and it's initially left to Wendy and Natsu to try and save the day, accompanied by their feline companions Happy and Charle. The survival of those two little critters is no accident however, as they prove to be the key to this unfolding plot - an attempt by a parallel world named Edolas to find a solution to their diminishing magical energy.

If swallowing up a city to siphon its power seems like a simple idea, the truth behind these events is anything but. Not that our survivors have much time to think about that, as they discover that the parallel world of Edolas also contains a parallel version of the Fairy Tail guild, and although it contains plenty of familiar faces - some shockingly so - the characters that they meet and their motivations really couldn't be much more different from those they would call their friends.

It probably goes without saying that both the "parallel world" angle and the appearance of exact opposites of the normal cast of characters within that world aren't exactly fresh ideas in story-telling terms - they're both concepts that are well worn and as old as the hills. However, in spite of that these episodes of Fairy Tail actually make a really good fist of fully utilising both of these premises - both English and Japanese voice casts seem to be having a whale of a time acting out of character for a change and the entertaining silliness of the whole thing fits perfectly into the show's usual modus operandi.

That isn't to say that jokes and being a bit daft are all these episodes have to offer - as per previous story arcs, Fairy Tail knows when to blindside the viewer with a moment of intense emotion, and once again it proves expert at timing and framing these moments to take from laughter to a lump in your throat in the blink of an eye. There's a little more to this than just some cheap tugging at heartstrings too - all of these emotionally striking moments are a deserved pay-off to periods of careful character-building or simply cleverly leaning on the camaraderie and relationships between characters. In short, the series is earnest and hard-working whether it makes you laugh or cry, yet it never *feels* like its having to work hard to elicit the responses from the viewer that it does.

The only area where Fairy Tail is perhaps on a slight downward spiral is in regards to its animation quality, which feels like it takes something of a dip across these episodes - admittedly, some of its cheapest-looking animation appears to be served up in the name of comedy, but that still doesn't excuse all of its less detailed or aesthetically pleasing moments. This isn't to say that the series suddenly looks terrible, merely a little less polished or detailed at times. Thankfully, both Japanese and English dubs continue to mirror the amount of fun which comes from watching the series, even if the English language track occasionally twists the meaning of some pieces of a dialogue a little further than it ideally should compared to the more faithful subtitle track.

If long-running shounen series typically go off the boil at some point, Fairy Tail at this juncture shows no signs of doing so - its formula may be well-established, but it still succeeds remarkably well at continuing to entertain, and occasionally move, the viewer throughout. If you're already a fan of the show then you most certainly won't be disappointed by this latest volume, and if you're merely an onlooker whose curious about the show you can be rest assured as to its quality up to this point.

7
Another story arc once again displays Fairy Tail's proficient use of drama and comedy - abilities which show no signs of abating.
COMMENT AND DISCUSS
blog comments powered by Disqus