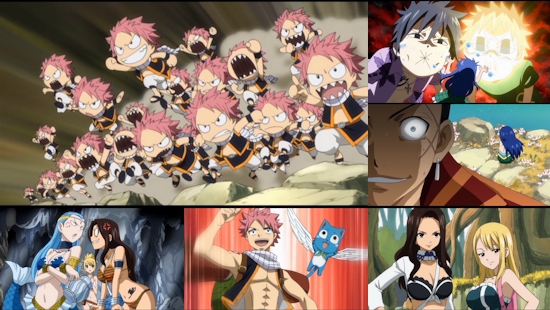 Would you believe it was early last August that we last checked out a volume of Fairy Tail for review? Quite possibly if you're a fan of the series that has been impatiently awaiting its return to the UK ever since that point. Well, the wait is now over at last, but circumstances have changed somewhat since that last volume, with the cancellation of future volumes on Blu-ray and a move to in-house authoring from distributor Manga Entertainment.

We'll discuss the impact of those changes in due course, but first let's talk about the new story arc that kicks off with this ninth volume. With everything seemingly calm within the Fairy Tail guild and no apparent threats in sight, all thoughts turn inwards as the guild holds its annual trial to promote a single individual to the status of S-class wizard from a hand-picking selection of powerful hopefuls who have impressed their master over recent times. Needless to say, there's no shortage of talent to choose from in this regard, and some of Fairy Tail's brightest young names - including Natsu and Gray, of course - find themselves on the shortlist which sees them partnering with other non-S-class individuals before heading to the guild's sacred ground, Tenrou Island. It's this location which also serves as a testing ground that will see friends pitting their wits against both one another and Fairy Tail's S-ranked finest to determine the one individual who will get to claim that rank and title for themselves.

If this opportunity to see comrades testing their mettle against one another isn't juicy enough in its own right, strange goings-on threaten to interrupt these trials - for starters, a so-called guild member named Mest is taking part in the event in spite of the fact that nobody really seems to be too sure of when and how he joined Fairy Tail in the first place. Even this is only the tip of the iceberg compared to what is about to descend upon Tonrou Island in a situation that will shock even guild master Makarov to his core, brought on by the appearance of a "black wizard" threatens all kinds of chaos.

Considering how tried and tested its formula is at this point, it can be taken as good news that nothing has changed in this latest Fairy Tail story arc - it still knows how to make full use of its cast whether it's having you laugh at its wacky silliness and well-placed moments of comedy or ensuring you tear up as it lays on the drama and emotion thick in a way which is handled better than pretty much any other shounen series that I can think of. Its balance of these elements continues to be impeccable, to the point where you could actually argue that the show's action is its weakest point when it comes to the three pillars of entertainment upon which the series resides - it simply doesn't seem to have the time or the budget to really grab your attention like Naruto or its ilk at its peak is want to do. Not that this is a huge black mark against a series that knows exactly how to compensate for its weaknesses, and no matter how formulaic it might be in broad terms it has more than enough in its locker to paper over those cracks and make you laugh or cry along with its shenanigans and goings-on. In a genre where consistency can be difficult for any long-running series, Fairy Tail's ability to keep moving forward apace and with both confidence and no shortage of ability behind it really is commendable.

So, nothing has changed in the world of Fairy Tail, but how about its UK presentation? For starters, the lack of a Blu-ray release for this volume serves as a reminder of what you lose by moving away from that superior format, even for a non-native HD series as Fairy Tail is at this juncture - although Manga Entertainment's in-house encode looks virtually impeccable during relatively static scenes (and arguably better than previous volumes on DVD), as soon as we enter any kind of action or fast-moving on-screen events things quickly descend into a blocky, pixelated mess. It isn't bad enough to make the series unwatchable but it's a long way from being satisfying and appears to be particularly pronounced even for the DVD format's limitations, adding another question mark over the quality of this distributor's releases of late. That question mark is further accentuated by the fact that, once again, chapter markers for every single episode fail entirely to match up with the actual layout of the episode in the lazy, half-assed fashion we've seen far too many times. With these authoring issues in mind, we're lopping a point from our final score for this volume, so take that into consideration with our final judgement below.

Outside of video quality, the series continues to exhibit strong performance from both its Japanese and English casts, while subtitles are as consistently strong in translation quality as ever and fans of that English voice cast get a few commentary tracks to enjoy to boot.

Over one hundred episodes into Fairy Tail, we're now at a point where the phrase "more of the same" might sound a little weary and tiresome in the hands of another show, yet somehow Fairy Tail's dynamic and premise shows no signs of slowing down or losing its way - this is consistency in the best possible terms, from a series which understands its strengths and plays to them confidently without fail, all backed up by a strong cast and simple but effective aesthetic. That this show can still ensure that the viewer buys into a twist or dramatic moment speaks volumes as to those strengths, from a genre that often struggles to convince when it tries to shock or surprise. Authoring issues aside, Fairy Tail is as vibrant and enjoyable as ever in 2015.

EDIT (19/02/2015): Since publishing this review, it's been brought to our attention that this UK release of Fairy Tail's ninth volume also suffers from some major subtitle issues alongside the problems we identified above - the first eight episodes exhibit subtitle sync issues when viewed alongside the Japanese audio track, meaning that subtitles are often mismatched with the dialogue actually being spoken and the characters they were spoken by.

As yet another detriment to the viewer's ability to watch and enjoy the series, we're removing another point from this release's final score - what would have been a 7 out of 10 release given a decent DVD presentation is now merely a 5 out of 10 release, and arguably should be avoided at all costs if you're planning to watch it with Japanese audio. This isn't good enough, Manga Entertainment - it isn't good enough at all.

English 5.1 and Japanese stereo audio. Extras consist of US cast audio commentary tracks for episodes 97 and 107, US cast video commentary for episode 99, a US trailer and text-free opening and closing credits.

5
A continuation of everything that makes Fairy Tail so enjoyable - laughs, drama and plenty of entertainment - that deserves a better UK presentation than it receives.
COMMENT AND DISCUSS
blog comments powered by Disqus