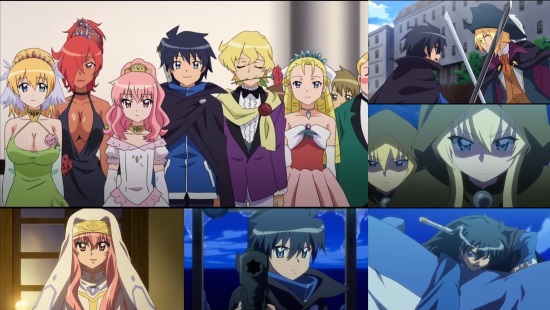 After the previous season's lull and eventual move to set things up for this, the final season of The Familiar of Zero, no time is wasted in establishing the plot that will lead the way to its conclusion. This time the void magic of the show's principal characters takes the forefront and is the main source of conflict. A few of the characters in the show are revealed to be able to use void magic, which doesn't adhere to the same principals as the other magic shown so far, leading the way to conflicts between the various countries in the show and with other races. While this is going on, Louise and Saito's relationship develops more, leading the way for Saito to discover what is most important to him.

Within these final twelve episodes there is a fair amount of plot and story to work through, making for a huge contrast compared to The Rondo of Princesses. As the previous season had episodes that felt very much like filler material, there to show the characters goofing off and having fun, this time things are more serious - not only for the main conflict but for character relationships as well. Since this is the final series the time for playing around has stopped and it's time for various aspects of the story to be settled. This is shown by the main story of the series revolving around magic and disasters that can affect the whole world but also with Saito, Louise and the various other cast members starting to take matters more seriously by contemplating their own mortality and how fragile their lives are. Within this series itself there are three major story arcs, each with escalating villains and more dangerous situations. Since the plot is constantly moving, things progress at a rather brisk pace to get through a lot of story. There are a few moments here and there where things slow down a bit to allow the audience to catch their breath, but usually if the show is not focusing on these points of conflicts it will be focusing on the love relationships between Saito and the various girls in the show.

The viewer is still treated to the very familiar routine of Saito getting into a compromising position with one of the girls and being caught by Louise, which in turn leads to the usual and predictable scene of Louise venting all her anger and frustration on Saito. However the tone feels slightly different this time, as after these moments there are scenes that follow of Saito apologising for his actions and expressing his desire for Louise above all the other girls, as well as scenes where the other girls state their intentions to Louise regarding how they feel about Saito which in turn shows Louise coming to terms with her emotions and affection for Saito. This aspect of the show in a way feels slightly rushed and reactionary on the parts of some of the characters since some of the characters suddenly announce they have feelings for someone or decide that emotion they are feeling currently must be love. This is actually addressed within the show itself in fairness, since they admit their feelings are mainly influenced by previous events and the fear that the war and conflict they are facing will prevent them from being able to find love.

With regards to the story, things are less political this time than they were in the second season but there are still some interesting aspects that deal with inequality and stereotyping. Whilst previous seasons dealt with this through the commoner and noble class system, this aspect seems to have disappeared from the show entirely mainly to focus on preconceived social stereotypes between humans and elves. Other than that, the story mainly focuses on magic and a disaster that is foretold that will destroy the world. This asserts itself by focusing on major conflicts and action scenes, most of which revolve around the usual fare of Saito sword fighting and other characters using magic. The scenes on offer are adequate enough but nothing really memorable or captivating like other action scenes from other series, leaving them to feel merely as a means to an end. The addition of more story and conflict to focus on is a huge plus compared to how the previous season though and the harem comedy aspect, while still present, is taken a bit more seriously this time as it ties into the overall plot and resolution to the series that covers all the main points it needs to.

The Familiar of Zero F leads the way towards a rather satisfying conclusion to the series as a whole. Surprisingly, it provides quite a lot of story and plot to end things with, and while not every sub-plot is resolved the main point of the series is settled in order to appease anyone who has stuck with the series to this point.

7
A satisfying conclusion for those who have stuck with the series.
COMMENT AND DISCUSS
blog comments powered by Disqus