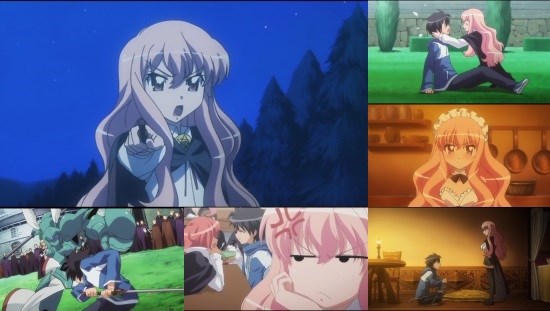 Eight years after its initial airing in Japan, The Familiar of Zero finally sees a UK release thanks to MVM Entertainment - within this time The Familiar of Zero has had four television seasons, all of which have now been licensed in the west. Prior to this point only the first season under discussion here was licensed, dubbed and released in America back in 2008 - in fact, this UK edition uses the same dub that was produced by Geneon Entertainment for that release.

The Familiar of Zero is set in the magical world of Halkeginia, which stylistically looks like medieval Europe. In this world there exists a very strict social hierarchy of peasants and nobles, defined very straightforwardly by the ability to use magic - all families that can use magic are the nobility, while those who cannot are deemed peasants. The protagonist of the series is a girl by the name of Louise Françoise Le Blanc de la Valliere, a student at a magic academy who is so inept at using magic that she has earned the deprecating title of “Louise the Zero”. As part of the school curriculum she takes part in a ritual to summon a familiar, a creature that is a servant of a mage that will follow every command issued by their master. Usually familiars are animals such as cats, owls or even more fantastical creatures such as Dragons and Griffins. However, Louise manages to summon a human boy from Japan called Saito Hiraga. Thus Saito is now trapped in a strange magical world as Louise's familiar.

From this point you'd expect the series would head in one of two directions, with Saito either embracing his new role as Louise's familiar or seeking her help in order to find a way home. Unfortunately the series decides to cherry pick aspects from both in completely the wrong way - Saito takes on his role as familiar not by choice but through oppression at the hands of Louise. As he is now Louise's familiar she begins to treat him as if he is sub-human, having him do all her chores, starving him for several day stretches and even going as far as to beat him with a whip. While this treatment is incredibly gross and excessive, Saito doesn't completely get the sympathy of the viewer as he acts in a way that seems to suggest he's winding up Louise on purpose at times. While Louise's abuse of Saito is physical and mental, it can also be seen that Saito abuses Louise verbally and emotionally - at times Saito will say things he is fully aware will agitate Louise, and will also behave like a pervert towards other girls in her presence. Both of their actions make the two main characters rather hard to like at the start of the series.

As the plot moves on however, things start to pick up. The series actually has some rather interesting sub-plots, one of which revolves around the political turmoil one of Louise's classmates is involved in which led to the magically induced insanity of her mother and the constant danger she finds herself in. Tied into this is a war breaking out between various countries in the world due to the orchestrated methods of a secret organisation. With the inclusion of more plot comes moments where Louise and Saito's characters start to develop, which itself ties in with the notion of Saito trying to find a way home. As mentioned previously the series doesn't really handle this aspect of the series all that well, relegating it to a few scenes and a sub-plot later on revolving around items in the world that were originally from Japan, as well as various stories of other people who have also found themselves transported to Halkeginia from Japan. Saito only seems interested in finding a way home whenever he is reminded of his home, and even then he hardly ever has a conversation regarding this with Louise - most of their dialogue with one another seems to stem from how they are both annoyed with their situation, Louise at how she is annoyed with how Saito is a disappointment and that his actions reflect badly on her for being his master, while Saito complains of his mistreatment and insults Louise based on the things he hears other students at the academy say about her. The series tries to play these aspects for comedy, and at times it can be funny simply due to how ridiculous things get (mainly revolving around Saito sticking his foot in his mouth) but most of the time it's hard to watch giving the content and context of some of the situations. Thankfully, the series does have a host of likeable supporting characters to help things along, many of whom also offer some interesting plots of their own and also give Saito and Louise opportunities to develop.

The series has a rather simple system of magic that is based around the classical elements of fire, earth, wind and water - yhe series enforces the notion that each character is naturally adept at using magic of one element and, through hard work, can master magic from other elements. This keeps the magic system rather simple and easy to follow, although the series doesn't really explain how this magic works other than asserting that those who are able to use magic can and peasants cannot. The magic on show is actually rather simple and standard fare, mostly shown as explosions, levitations and summoning familiars. Since the majority of the series takes place in a magic school you'd think there might be more emphasis on learning about the intricacies of magic, but sadly this aspect is brushed to one side to make room for the other components that make up the show, these being its comedy harem shenanigans and a few action scenes which mainly revolve around Saito wielding a sword and the other characters using magic. The action scenes in question are rather standard fare for the time and have not really aged all that well - there is a big battle scene near the end of the series which should be more exciting than it is given the situation but the animation used doesn't really make is all that exciting to watch. The harem antics are also pretty bog-standard, with many of the female cast falling in love with Saito for no reason - one character is even called out on their behaviour and admits there is no reason why she likes him! While there are moments like these dotted around the series, things usually come to an abrupt halt before they escalate due to either Saito's stupidity or Louise’s anger. For those wanting a harem fan service show there are much better series out there which are able to provide more than The Familiar of Zero is offering.

The English dub is passable and perfectly serviceable but rather mediocre overall. The majority of the cast give rather stiff and bored performances with one character in particular given an outright terrible performance. That being said though, Cristina Vee does give a rather earnest attempt at voicing Louise, which makes her the stand-out character in the dub by a considerable margin. The dub is not bad and is certainly watchable, but is rather lacking considering that it sounds like only one character had any effort put into their portrayal. The same can also be said for the Japanese audio with regards to the stand-out performance also beloning to Louise - here viewers are treated to the voice acting talents of Rie Kugimiya, who many will recognise portraying similar characters in other anime.

The Familiar of Zero is a series that is littered with problems but also has moments of intrigue - the series boasts an interesting magical world with great political turmoil and the promise of more intrigue to follow. However, the action scenes look dated, the harem comedy is lacklustre and there is a real issue with how the main characters are presented. There's something oddly fascinating about The Familiar of Zero - its magical world and plot do enough to keep your attention and there are signs of character growth and development in it's leads. While rather subtle right now, knowing that MVM Entertainment have the licensing rights to the first three seasons of the show means that it will not be too long a wait to see how things progress.

6
An interesting fantasy world filled with an intriguing plot, but brought down a few notches by it's action, comedy harem clichés and initially unlikeable leads.