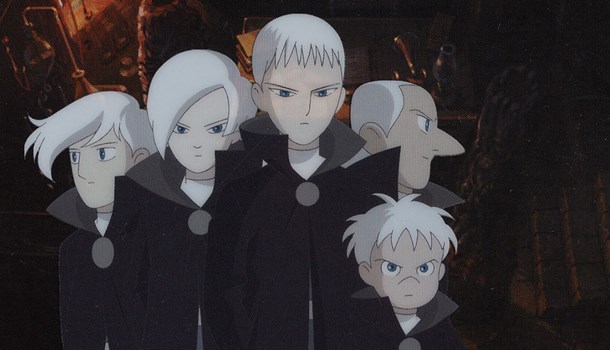 Thus far, reviewing Fantastic Children has been a bit of a roller coaster ride, with a storyline with great potential occasionally being overshadowed by unnecessarily convoluted scripting, leaving the plot plodding along at worse than a snail's pace.  As we reach the penultimate volume of the series on DVD, you'd expect to see an upward shift in both the pace and tightness of the storyline as the show comes to its conclusions, and thankfully that's exactly what volume five brings us.

The first episode on the disc finally brings to a close the full story of just what happened on Greecia to cause Princess Tina to have her soul transported to Earth, where it eventually landed up in the body of Helga.  While this recap of the ancient history that is the backbone of the story has been one those plodding chunks of the script I just mentioned, the finale of that part of the story is both somewhat tighter and more relevant to the bigger picture. Despite all that, the fact that this particular story has gone on much longer than it really needed to means that its conclusion certainly brought a sigh of relief from me.

From here we return to Earth and a distraught Helga, as all of the painful memories of her past lives are brought to bear.  There isn't too much time to dwell on these facts however, as from here on in the action kicks up a notch, and with it the various revelations that see the pieces of the puzzle that are the Children of Befort, the GED group, and more specifically the pasts and origins of both Professor Gherta and Dumas slot together.  If that all seems like too much to give away with a whole volume of the series left to run, don’t worry - There are still clearly some big twists and turns left up this show's sleeve.

If you've persevered with the show this far, then this is most likely the disc that will raise your hopes that it's all been worthwhile - With all that long-winded and painful outlining of the back story out of the way, the main focus of the anime gets to take the centre stage it deserves, and truly looks set to deliver.  The scripting is much tighter, the unravelling of the various mysteries that accompany many of the characters is fascinating, and the whole pace of the show takes a turn for the better.  The animation is still basic and some of the character designs feel rather uninspired, but look beyond that and you have a solid and intriguing show with an innovative tale that belies its simplicity on the surface with some moments of genuine depth in its concepts.

Overall then, after all those mixed feelings all the way through watching this series, I'm finally left looking forward to seeing the final instalment - Let's just hope it delivers.  The criticisms I've levelled at Fantastic Children may be enough to prevent it from becoming any kind of classic, but it still has plenty to offer in the way of both entertainment and intrigue.

A choice of English, French and Japanese audio again sits alongside English and French subtitles.  Some Beez-related trailers and text-free opening and ending credits are the only goodies on offer.

7
Finally, everything is coming together for this series - Bring on the finale!
LATEST REVIEWS