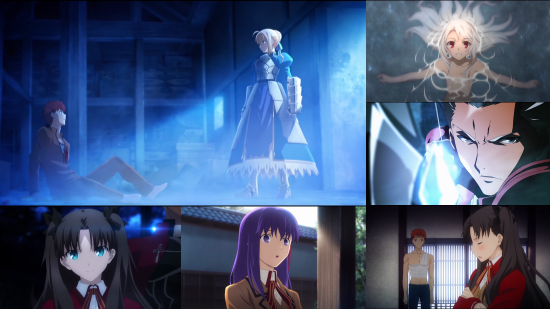 There are three constants in the world of Fate/Stay Night.

However, this is all based on you having some form of passing knowledge of the Fate universe and what goes through the heads of those at Type Moon. Luckily though, Fate/Stay Night: Unlimited Blade Works makes an honest fan out of you by delivering what is perhaps the most Rin-tastic introduction to the Holy Grail War and the universe in general. Unlimited Blade Works begins with two double length episodes starring the main characters, the aforementioned Rin Tohsaka and Emiya Shirou.

Rin is our gateway into a world where mages exist and protect their works highly. A world where competition between mage families cumulates in a war, where once a decade certain mages are chosen to fight for the power of the Holy Grail. The Grail, once unleashed, has the power to grant any wish. However, in a war between mages, it’s not normally as simple as just stabbing another mage in the back. Nope, instead the mages use all their might to summon servants. These servants are the reincarnation of humanity’s greatest heroes, brought back to fight in this war as one of a series of classes: Archer, Beserker, Caster, Saber, Assassin, Rider and Lancer. Each class has their own strengths and, when fed mana from a trained mage, they are lethal.

Those who are participating in the Holy Grail War are known as a master. Each master is given three command seals to control and force commands on their servant and the name of the game is quite simply to be the last man (or woman) standing. It's kill or be killed. In the end, Fate/Stay Night is all about the path to the grail.  It’s about who get slaughtered, the horrible games played, the devious magic used to gather mana and about how Rin is perhaps the cutest when she blushes.

I keep going on about Rin purely as she, and her servant Archer, are perhaps the most interesting characters so far in Unlimited Blade Works. I know Emiya and Saber have their own little developments and that Emiya, as the main bloke in the show, is immediately the chap who manages to get all the love attention, but honestly it's Rin who is more interesting. This is due in part to the sheer amount of screen time she's granted. Rin acts almost as the guide to the viewer - she is both cute, lovable, and horrifically violent making her the pinnacle of the “tsundere” personality; you know the type - they hate you, yet love you. Basically, Rin is just a giant cat (sounds more like Prisma Illya... -Ed). Archer on the other hand is perhaps the most mysterious and for some reason, I keep seeing elements of Sean Connery in him. Maybe it’s just that sexy man’s voice going “Holy Grail” over and over in my head when I watch this. Archer is a bit of a rebel, he does what he wants, and grudgingly goes along with Rin’s wishes like a spoilt puppy.

I could go on about the Emiya and Saber relationship, but to be honest their partnership doesn’t fully develop in this first half of the series. Emiya’s power and abilities take a while to work out, and frankly they haven’t quite hit the peak level of partnership by mid-series, at least not to the point where I want to swoon over Saber and that smile of hers.

Unlimited Blade Works has been previously streamed, and is still being streamed here in the UK. So why go physical? Well, for starters, there is the upgrade in quality. There are comparisons elsewhere on the Internet showing the level of polish that the Blu-ray edition received when compared to the streaming version and it’s certainly worth an upgrade. Even though the check discs presented for this review were DVD, it’s evident that even these copies are from a High Definition master.

What else do you get? Well, there is the questionable English dub. It’s not actually bad, except for Rin’s voice, which is simply hideous and doesn’t match her character at all, but everyone else’s is great, especially Archer.

I haven’t done a lot to actually compare Unlimited Blade Works to the original series, which follows a different path. That’s because it is actually unnecessary. This Unlimited Blade Works anime outshines its feature length predecessor, and in some ways is better than the source material. The story telling, characters, action and suspense is almost holy and makes it, for me, one of the must-have anime series of the year.

9
Story, suspense, Rin Tohsaka... what more could you want?