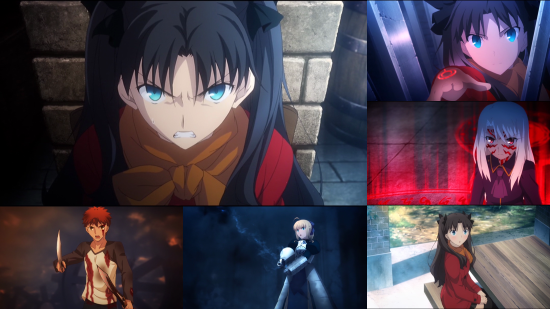 If someone had said to me a few months ago that I would actually come to like Emiya Shirou as a character, I would have laughed. Then laughed some more. Maybe coughed a bit, and then continued laughing.

He was not a good character in the original Fate/stay Night series, and there is honestly no reason why he should be any different in this alternative story. Yet, somehow, he is. In the original series Emiya was closely linked with Saber who formed his main love interest. Not only was he written badly and his story flawed, but his relationship with Saber, Sakura and Rin just never clicked. He was, to put it bluntly, a hateful character. Considering that Emiya Shirou’s story is the focus for the Fate/stay Night series as its protagonist, this is a rather significant flaw.

What the original series lacked was the involvement of the Twin-tailed Tsundere Terror, Rin Tohsaka. Now, as much as I adore the one true kingly waifu, Saber, she doesn’t quite match the sheer delight that Rin gives. Rin, without a shadow of a doubt, makes Fate/stay Night: Unlimited Blade Works. Her sarcasm, her fire and her selfless determination and sacrifice makes Unlimited Blade Works perhaps the best Fate series yet. It’s not that I am in love with her or anything... stupid.

But why, I hear you ask, does Rin being simply fantastic make Emiya a better character? Well, it isn’t entirely down to her, though she is a big part of it due to their relationship giving Emiya’s character more depth and emotion. No, I think what actually makes his character likeable is, oddly enough, Emiya himself - that is to say the Emiya of the future which Rin summoned.

Ah yes, if it wasn’t obvious, Emiya Shirou is Archer and Archer is Emiya Shirou, except much older, much crueler, much more cynical and damaged from his stint being summoned as a “Hero of Justice” throughout time. The relationship between Archer and Rin and between Emiya and Rin are difficult to put into words, but in a single word, it is fascinating. However, their relationship soon turns sour and treacherous as Archer’s true intentions become evident and his attempt to invoke the Grandfather Paradox on his past self soon goes awry as the Holy Grail War turns truly vicious. This doesn’t put poor past-Emiya out of the picture, as this proto Hero of Justice needs to learn to fight, to use his magic and to actually grow a spine if he is going to survive this war, and its here where he finally becomes a character whom I can support and believe in. We all love underdogs, especially when they only manage to win battles due to good planning and a hefty dose of luck.

My only criticism with the series is actually with the lack of Saber. Her character is left hollow compared to the original storyline. Although she has her moments of being both strong and cute, Saber is definitely no longer in the limelight. However, when both of the best girls come together, Fate/stay Night: Unlimited Blade Works truly becomes unlimited in its scope for making me very happy.

But enough with the fannish pandering and my swooning over my favourite characters. The key question is whether Unlimited Blade Works is any good. Yes. Yes it really is, and that is coming from my objective head. Well, sort of.

With a very strong story and an intensely satisfying finish, Unlimited Blade Works gives the viewer everything they need to lose several days in magical battles and treachery. The story is just the icing on the cake for a series which is well produced, well animated, incredibly well voiced (especially Rin) and, to top it off, presented in a very pretty box if you get the Collector’s Edition.

I think it’s safe to say that if you've enjoyed what you have seen in the first half of the series, then it goes without question that the second half is a must buy, if not purely for the epilogue.

I am going to throw in a few words about this Epilogue, mostly as it had a bit more of an impact on me than I expected. Type Moon have a knack for endings which is, in my opinion, is not matched by any other publisher. As with The Garden of Sinners which came before it, Fate/stay Night: Unlimited Blade Works provides an ending which quite frankly leaves grin from ear to ear and happy giggles throughout the entire episode and in fact gives the exact ending I always hoped for. I will let those among you who know me make an intelligent guess as to what kind of ending this would be. This is the kind of a grin that only series of a certain... calibre can deliver.

Unlimited Blade Works is the kind of series that any UK collector would be proud to have on their shelves, and provides hours of gripping high tension and emotional entertainment as the masters fight to secure the Holy Grail. It is a series not to be missed.

The Collector's Edition Blu-ray release also includes a booklet, poster and art cards within its collector's packaging. You can find our video look at this edition right here on the site.

9
Excellent story, art, acting and writing. A series not to be missed.
COMMENT AND DISCUSS
blog comments powered by Disqus