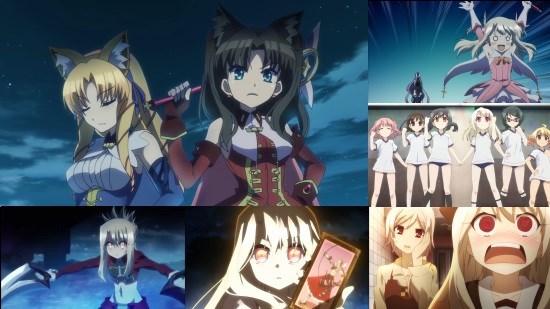 It’s been a while since we’ve seen a magical girl series released in the UK. In fact you might even have to go as far back as Manga Entertainment’s 2012 release of Madoka (discounting the recent film releases of course), and we could well be in for another dry spell as the second and third series of Fate/Kaleid liner Prisma Illya have some content that might cause issues with the BBFC (but then again no-one thought Strike Witches would get away with it either...) So then, is Prisma Illya the series that makes the wait worthwhile for either magical girl fans or the Type-Moon aficionados? Time to find out, so grab your talking mascot and I’ll put on my tutu...

In this alternate universe take on Fate/stay Night, Illya now lives a happy life in the company of half brother Shirou and her two maids, and has all the boxes ticked for her life from wacky friends to absent globe-trotting parents to unrequited crush on said half-brother. In some ways however her life is about to get even better after the magical wands Ruby and Sapphire decided to abandon their masters in search of more gullible.... erm, more suitable candidates to be magical girls. Enter new magical girl Prisma Illya and her new comrade, the taciturn Miyu. Their quest is to collect magical cards which are causing chaos.... well, that is not causing any chaos at all, as they're just sitting quietly mucking around in an alternate dimension. But, the Mages society wants them because they’re powerful, taking the form of the heroic spirits from Fate/stay Night, so that’s more or less enough of an excuse.

So here’s the deal: Prisma Illya is as classic a magical girl series as you can get for the most part. It ticks off every single cliché you can think of for the genre, and that’s about the extent of its ambitions for its first season. Nowhere is this more apparent than our two lead characters – Illya is the happy, positive one who believes in the power of friendship and Miyu is the stern loner who wants to do everything herself due to her dark mysterious past. If that were all there was to the series then you’d have a fairly standard series that wouldn’t stand out in anyway other than its familiar character designs. However, there are a few areas where the series goes off-book and this proves to be both a blessing and a curse for the series.

For starters, our mascot characters Ruby and Sapphire are brilliant – it should be impossible to animate a stick with this much life and energy but somehow studio Silver Link have done an astonishing job, and the animation for Ruby in particular combined with the voice of Naoko Takano creates a brilliantly memorable and fun character. Then there’s Rin and Luvia. Rin has always been a huge fan favourite of the Fate/stay Night canon and getting to see her as a magical girl complete with cat ears and tail is a real treat - her scenes with Luvia, whether in a massive magical battle or arguing over everything are the highlights of the series. Tto an extent, this highlights the problem that Prisma Illya has – The "main story" of Illya and Miyu is drastically uninteresting no matter how many sparkles they put on it and you constantly find yourself wishing that they’d just ditch the pair of them and make Rin and Luvia the leads, which would also likely jettison a lot of the issues people have with certain aspects of the later seasons (and this one too frankly, given that Illya all but rapes Miyu at one point after seeing her in a maid uniform).  It obviously hasn’t hurt the series overly back in Japan where a fourth season has been announced for next year, but it’s very much a missed opportunity.

Visually the series looks a bit odd at first, with some unusual character designs which are particularly jolting coming off of the recent "real" Fate/stay Night series Unlimited Blade Works earlier this year, but you get past that pretty quickly and the series does actually look pretty good, particularly once you get into the action sequences (although oddly enough Illya’s transformation sequence is as dull and lifeless as it gets). It’s backed up by a terrific Japanese voice cast which naturally includes every alumni from the main Fate/stay Night series. The Japanese version is the default setting on the discs which as it turns out is something of a blessing, as after discovering that there actually was an English dub buried away in the menus a scant 30 seconds of it convinced me that it was best left there as its one of the worst dubs I’ve heard in a long time - akin to having to listen to someone rub their fingers over a balloon.

All in all you can’t fault Prisma Illya too much. It does exactly what it sets out to do and does it pretty well, making for a really entertaining show out of what by all rights should have been a cheaply-made cash-grab. Yes there are issues, but these are due to my desires for what could have been or might have been, and if you can’t have a magical girl Rin series then at least you have episode five of this show which is a pure fan-gasm of cat-eared goodness. Best of all, and in what is a huge step-up from the main series, Shirou is almost totally absent from proceedings, instantly improving everything tenfold! I’m not entirely sure who I’d recommend buying the series to, as magical girl fans will likely already have superior offerings like Madoka Magica, Cardcaptor Sakura and Lyrical Nanoha in their collections, while Fate/stay Night fans may find this a little too light and fluffy for their tastes, but the show is certainly worth a watch.

The Collector's Edition of the series also contains a 48-page booklet and four Tarot cards.

7
A solid show, albeit one that's upstaged at every turn by what might have been.