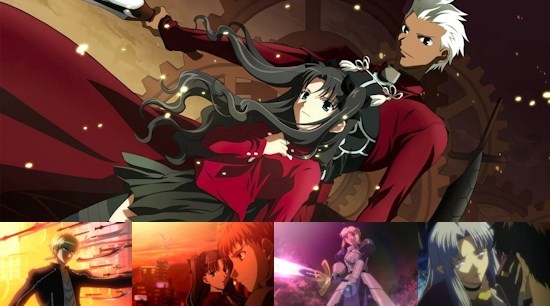 One of the great things about visual novels is their ability to provide multiple paths through a story, and so it is with Unlimited Blade Works, the feature-film version of the game which takes an alternative path from the TV series and provides new fates for our cast.

For those who haven't engaged in the Holy Grail Wars before, the story centres around modern day mages who, once every 10 years, engage in a battle for the Holy Grail of legend, which has the power to grant whatever the victor desires. These battles are fought with the aid of a servant, the essence of a legendary hero from Earth's mythology, each of which fight with a specialised style and weapon. Shiro Emiya is a young man who stumbles into a battle between two mages, and as such is introduced to the war. He does have some magical ability, being able to instinctively "trace" the properties of an object and recreate a copy of it, and the further ability to reinforce the structural integrity of said object. He is paired with Saber, a young woman who initially weilds an invisible sword.

In the Unlimited Blade Works narrative, the story focuses on Shiro and his relationship with the servant called Archer, who serves a young sorceress named Rin Tohsuka. It is Rin who saves Shiro's life in his first fateful encounter in the war, and the two form an uneasy friendship.

Unlimited Blade Works is a very much a two-tone release. Visually you won't find much to surpass it - Type Moon's absolutely gorgeous designs will keep your eyeballs glued to the screen as the magnificent set-pieces do justice to the Blu Ray release. Rock-steady freeze-frames and a general lack of artifacting on screen (though I noticed one instance during a particularly intense scene) keep the quality high. The use of colour and the general art direction back up an already sumptious release, and if you want an anime to show non-fans, this would be a great pick. The film is backed up with a fantastic soundtrack, everything from the music to the clash of swords is crystal clear, and in a refreshing change the balance between speech and sound effects is pretty much spot on. The dub is of a good quality, with most of the original English voice cast returning (save Saber, who admittedly loses some gravitas due to the change) but all in, it's great for the eyes and ears.

However, all is not entirely well within the lush visual/audio garden. The narrative could at best be described as choppy, especially the almost completely disconnected opening sequence (I genuinely thought I'd skipped a chapter). I put this lurching narrative down to the need to get the basics out of the way, and after all with a limited runtime some of the background had to go. The film stays true to the series for the first 25 minutes, before diverging down it's alternative path. At this point I expected the pacing to improve, but unfortunately this wasn't the case. Characters seemingly appeared at random, locations seemed to change at the drop of a hat and basically it all felt completely disjointed. It also failed to follow its own logic in places, which made things even more bizarre.

At one point Shiro and Rin escape a confrontation only to return to it later without any backup, meaning that the situation was identical to the one they had escaped from earlier. Similarly, one character dies and then,defying any logic, reappears for a chat with Rin. In the middle of nowhere. It's just jarring, and if I'd taken my eye off the screen for more than a second or two I'd have assumed that something important had been missed.

So who is this film for? It's certainly a better experience if you have some knowledge of the characters from other media - many appearances are so brief that you don't get any kind of character building. In particular Illya and Berserker are reduced to a general threat, and Rider barely appears at all. For action-junkies who aren't overly concerned with plot, the film works as a visual spectacle, but as a narrative it's bordering on broken. Those who value spectacle over plot will doubtless find this a minor issue, but as a fan of the series, the lack of detail on some of the better elements of the story grew to irritate quickly.

7
Beautiful and alluring it may be, but the narrative is anything but pretty. A bit of background research will pay dividends before watching this gorgeous but ultimately shallow spectacle.