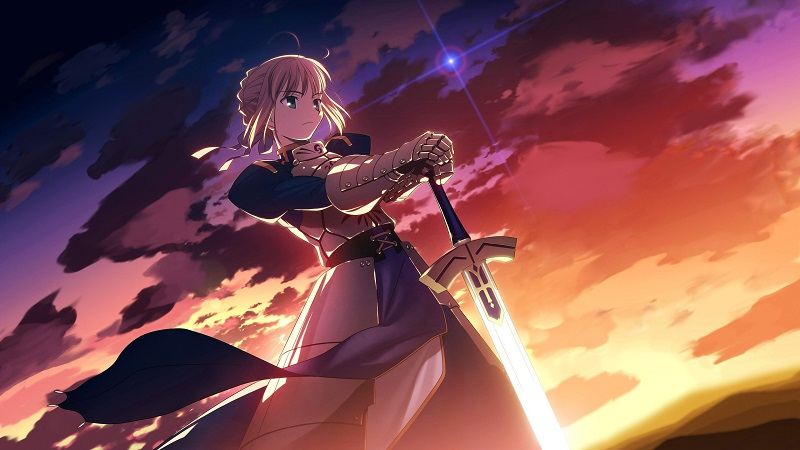 Welcome to the 7th Holy Grail War, a conflict which pits 7 masters and their servants against each other in a battle-royale until only one is left standing, and to the victor go the spoils - the chance to have any desire granted by the Holy Grail itself.

Masters are all gifted with magical abilities, and the servants are all historical figures of legend who can be called forth whenever the Grail Wars begin.

The series is based on a series of visual novel games released in Japan, which encompass several possible endings depending on your actions. Created by Type-Moon, the studio behind other popular visual novels such as Tsukihime, Fate has has been a runaway success, thanks to it's beautiful character designs, complex plot and it's appearance in several different media such as console games (in fact Fate: Unlimited Code was recently released for PSP in Europe), manga and this very anime series.

The main characters are Shiro, a young man with a gift for magical repairs but lacking any formal training, Rin Tosuka, a girl in his class who has full control of her magical powers, and their servants, Saber and Archer respectively.

It helps that Shiro is such a like-able lead. In common with most anime males, he's a bit of a doormat, but he'll stand and fight his ground when pushed, making him a positive everyman figure.

This first volume contains 4 episodes, in which we meet 4 of the servants (though one master remains unaccounted for). As an opening, the show delivers much of what you'd expect - character introductions, some action and a little mystery to keep you tuning in. The premise keeps the formula fresh, which is a rare feat these days.

The first thing that struck me when watching the anime was just how good everything looked. The character designs are beautifully realised, mixing traditional styles with modern concepts, all set against some fantastically painted backdrops. Everything is pin sharp and the direction ensures that the pace is kept at a jaunty speed throughout.

The music is lovely too, though it had a slightly retro feel to it. Vocal work is, as you'd expect, superior in the Japanese original, but the English cast do a fine job too, making it a respectable choice if you don't fancy reading the entire story.

The only letdowns on this disc are the lack of any real extras, and the fact that, if you're watching the dub, the Japanese text at the opening of each episode is left untranslated, which is a little annoying.

So, the series has started in fine style, but you really do feel that the best is yet to come, as more combatants will surely reveal themselves and the true identity of all the servants comes to light.

8
An excellent start to the Fate anime, bringing everything you'd expect to the table and laying it with style.
COMMENT AND DISCUSS
blog comments powered by Disqus