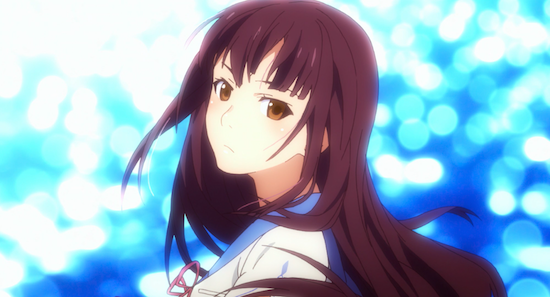 On paper, Fireworks should have been the perfect coming together of various deliciously ripe ingredients. Re-mixing and remaking Shunji Iwai’s 1993 live action film of the same name into an anime, Fireworks comes hot on the heels of the director’s previous success with The Case of Hana & Alice a few years ago. This time, studio SHAFT are on production duties, working their suitably outre magic on the source material and turning in an end product that, visually at least, feels like it slots in right next to their famed Bakemonogatari series. The movie’s theme song, provided courtesy of hot Tokyo talent DAOKO, has also been a stalwart of Japan’s streaming charts over the past few months, lending further credibility to the movie’s efforts at an achingly ‘hip’ aesthetic.

Telling the story of a dreamy summer romance, Fireworks aims to recapture the magical essence of that one perfect love we all had when we were young - following the story of boisterous young lad Norimichi and class idol Nazuna. The couple seem ill-suited, but when Nazuna asks Norimichi to elope with her, will everything really work out as perfectly as he might hope…? Firework’s love-story playbook might seem to be teeing it up to be the next Your Name, but when you actually sit down to watch the movie, it quickly becomes evident that there is a grave disconnect at work. The visuals are beautifully, stunningly perfect - glossy to the extreme, and with a fluidity befitting the project’s big-screen status. But it comes paired with a narrative style clearly in deep debt to the indie-movie origins of the original story. Sure, the painstaking efforts to create a kind of ‘anime as live action’ feel are admirable - but the lackadaisical atmospherics and performance style feels oddly at ease with the visuals (which also includes some woefully integrated CGI moments).

We spend a good deal of time in the company of Norimichi and his laddy class pals, shooting the breeze at both the poolside and seaside as they trade weirdly off-taste jokes about girls’ cup sizes and pooping. These aimless conversations just keep coming ad infinitum, something only emphasised further when the plot drops a Steins;Gate style twist in which time keeps repeating the same events over and over again. It’s left to Norimichi to try and bring about the most positive outcome for his budding romance with Nazuna - but while this could have played out as a dizzyingly high-stakes scenario, what we’re left with feels like the longest hour and a half you’ll ever experience in your life, spent in the company of a thoroughly unlikeable bunch of characters.

It’s a shame, as the cast is for the most part top notch. Nazuna’s voice actress - Suzu Hirose - is one of Japanese cinema’s brightest rising stars right now, turning in stunning performances in Hirokazu Koreeda’s Our Little Sister and the live-action Chihayafuru movies. Here though, she can only work with the material she is given, and while the naturalistic tone of the movie’s voice work is to be admired, when it spends as long as it does navel gazing through wearisome topics like the titular question of whether fireworks look better when seen from the side or the bottom [Fireworks, Should We See It from the Side or the Bottom? is the full Japanese title, here it is marketed simply as Fireworks - Ed.], it takes a minor miracle to not start snoozing off.

Special mention has to go to composer Satoru Kosaki’s soundtrack, quite possibly the strongest asset the film has to work with - visuals aside. Flitting between lushly orchestrated passages to deep, multi-layered movements reminiscent of Steve Reich’s minimalist style, Kosaki’s music packs a real warmth and power to it, adding an instant emotional resonance sadly lacking elsewhere in the movie - something you’d kind of expect as an essential ingredient in a cinematic depiction of romance.

For a look at how SHAFT can tell a powerful love story properly, look no further than the Bakemonogatari series itself, or alternatively, their visual novel adaptation ef: A Tale of Memories. Equally, for those looking for more of Fireworks’ 90s indie-movie feel paired with a similarly aquatic colour palette, then we heartily recommend avant-garde visionary Sogo Ishii’s criminally underrated 1995 masterpiece August in the Water.

Ultimately, Fireworks comes off like a very glossy, print-perfect gallery piece. Anime needs bold, daring productions like this to continue pushing forward as a medium - stylistic exercises in pure aesthetic that stretch the boundaries of what precisely ‘anime’ can do. But beyond being an interesting festival circuit showpiece, the simple fact remains that Fireworks is not an easy watch by any stretch of the imagination.

You can find more information, including showtimes, at http://fireworksmovie.co.uk/

5
Sumptuous yet hollow eye candy - Fireworks is all style over substance.
LATEST REVIEWS