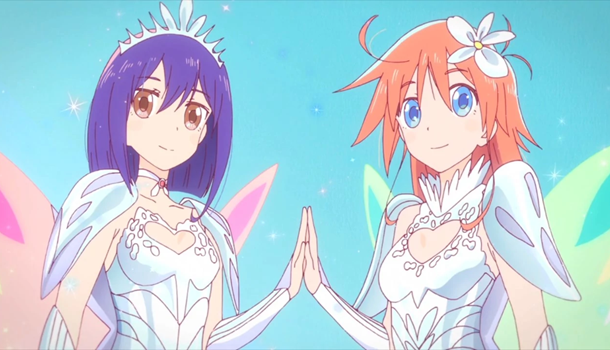 Believe me when I say that some reviews are just… difficult. Over the weeks it has taken me to finally pull my thoughts together on Flip Flappers, I have recommended the series to four people, all of whom enjoyed it. I wasn’t able to properly articulate why it’s good, just, that it was. When people asked me why, all I could really say was that it was cute, brutal and dark at times, and truly imaginative.

So please forgive the delay (Nope! Now write 4 more reviews for me - Ed), but it has taken me a good while to finally put into words why Flip Flappers, should be one to add to your watch list.

The series begins innocently enough and begins with a teenage high school girl called Cocona. Cocona is quite a reserved individual having lived her life under the protection of her adoptive grandmother and she is generally ignored by those around her at school, except for her protective friend Yayaka. Other than her green bundle of rabbit fluff Uekull (weird name, I know), she really doesn’t interact with many people around her. Cocona’s life is generally dull. She studies, she goes home and cares for her grandmother and hangs out with Yayaka. However, that changes when a hyperactive and energetic girl called Papika literally flies out of the sky on a surfboard with a bizarre yellow robot, and carries her away into a bizarre alternative dimension where anything is possible called Pure Illusion.

From here, Papika recruits Cocona to help her search for these hidden crystal shards which, when combined and collected together, can give the power to “grant wishes”, or so she is told. However, the shards are not only incredibly powerful, and allow Cocona and Papika to “power up” when their wills align (and when Cocona isn’t actually upset with Papika) but they also highly sought after by other less honest people. As hard as Cocona tried, she found that she couldn’t separate herself from Papika and they continue on their trips into the Pure Illusion thanks to the assistance of a small team who work for an organisation called “Flip Flap”. Yes, the name is awful. And while Cocona and Papika don’t have a great deal of success thanks to a rival team who are intent on stealing the shards first, they manage to finally synchronise and go “Flip Flapping” creating one of the most precious magical girl transformations which I have ever seen.

Now, at this stage, I naturally assumed that Flip Flappers would simply be a series of continuing adventures to catch all the shards with the kind of to-ing and fro-ing between rivals that you might see in other series, perhaps like Pokemon.

But no, just as you get comfortable, Flip Flappers throws in some wild cards. First, while there are two organisations trying to get the shards, there are no good guys. Second, the shards are not what they seem. Third, Papika and Cocona are also not who they seem and everyone is connected by a seemingly endless series of complicated relationships which may or may not involve age regression by one or more parties.

Flip Flappers touches on some rather sensitive subjects for some including child abandonment, slavery, abuse and touches on the deep relationships which once existed between Cocona, her mother and father and to put it bluntly, what happens with Cocona’s family isn’t good in the slightest and this is one of the more brutal aspects of the storyline. Even with this brutality, this developing plot weaves together Papika and Cocona’s histories, resolves many of the plot devices and actually gives a satisfactory ending to the series.

So, I liked the story. I also found the characters to be wonderful too. Especially Yayaka who changes and evolves substantially thoughout the series. Papika is always Papika, and she never truly changes other than in the level of her devotion to Cocona which goes beyond her overwhelming feelings of love.

The animation and setting for Flip Flappers is astonishing. While the character designs are quite simplistic and highly stylised, the depth of the imagination and the use of colour on the environs within Pure Illusion quite honestly blows you away. Each world is unique and when combined with the highly animated action scenes, the fabulous battle scenes and let’s not forget the transformation sequences as the girls flip flap their way into their powerups, Flip Flappers is a stylish visual delight for the eyes.

I have watched Flip Flappers in both English and Japanese and while the English is actually rather good, (especially the actor for Cocona who has mastered the deadpan nature of the character), nothing beats the enthusiasm of the Japanese actors, especially Papika, and it’s definitely one of those performances where, once you fall in love with a set of actors, you will stick with them.

Flip Flappers is beautiful, stylish and most of all fun. The story is very light to begin with, and evolves and darkens as the series progresses and as the understanding of the power of Pure Illusion increases and as your feelings for the characters grow, Flip Flappers draws you in more. While the art style isn’t for everyone, the pure innocence and fun of the show will draw you in and good luck escaping. And if the show doesn’t work for you, just watch the closing animation. Just adorable!