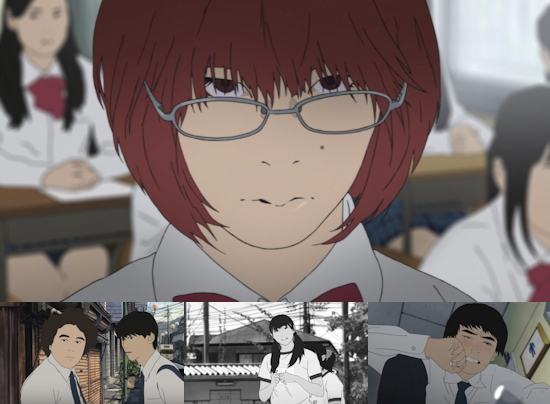 No matter how much it's feted as the best time of your life in most anime, being a teenager is hard. You're old enough to know what you want yet unsure of how to express those desires; you want to be noticed and set apart as someone special, yet want to hide from anyone and everyone; you're smart enough to start figuring out how the world really works yet naive enough to be strung along by others. With all of that in mind, Flowers of Evil could be called the only "true" (albeit overblown) slice of life anime series. Based on the manga by Shuuzou Oshimi, it's a dark tale of youthful misadventure which is at once both seemingly improbable and uncomfortably close to the memories we all most likely hold of our own past indiscretions.

Our protagonist for the series is Takao Kasuga, a middle school student who considers himself to be unlike his peers - while they goof around and talk about what was on TV the previous night, he reads Baudelaire and other such prominent authors and can always be found with his head in a book. Likewise, Kasuga frowns on the crass talk of other students - unlike their leering gazes as the more popular females in their class, he has eyes for only one girl - Saeki - who he views not as an object of lust but as his muse; his angel.

At least, this is Kasuga as he presents himself to the world - quiet, thoughtful, somehow superior to his peers - but when push comes to shove his desires are the same as any other teenager. Thus, when he finds himself in a classroom with Saeki's gym uniform... well, let's just say his hormones get the better of him, and he finds himself running home with said clothes stuffed under his shirt.

In the aftermath of this moment of madness, Kasuga naturally feels guilty and plans how to return the uniform to its rightful owner - a simple task, until it turns out that he was spotted carrying out his sinful deed. What's more, he was sighted by none other than class troublemaker Nakamura, a dysfunctional girl who (at least outwardly) cares not what anyone thinks of her, and is more than willing to curse out her teachers and basically do whatever she pleases.

As a result, Kasuga finds himself blackmailed into a "contract" with Nakamura, who seems determined to push him into exploring the depths of depravity of which she believes him capable, all while his relationship with Saeki takes a surprising turn or two. The result is a maelstrom of thoughts, deeds and desires as this trio all find themselves out of their depths and unable to express how they really feel - a problem which only pushes them further down a rabbit hole that seems bottomless.

In a way, Flowers of Evil is the mirror image of recent Anime Limited acquisition The Murder Case of Hana & Alice in several respects. Aesthetically, both offerings are rotoscoped to give what is ostensibly a live-action drama an animated look and feel, and in terms of subject matter both stories take in misguided teenage adventures based on naive mistakes compounded by yet more mistakes.

It's here that the two stories diverge however - while The Murder Case of Hana & Alice is ultimately a gentle tale of human kindness and an upbeat suggestion that teenagers need to make mistakes and engage in stupid endeavours in order to learn from them, Flowers of Evil's world is perhaps just as safe in reality but feels much darker. Kasuga's home town is sleepy and bland, with nothing but "pachinko parlours and rusted metal" as he puts it -it's an area which feels inescapable to a youth bereft of transport and money to venture beyond the mountains to the wider world beyond, and this sense of claustrophobic confinement hangs heavily over the series. This is also a world where the presence of grown-ups appears far less helpful - adults are on-hand throughout, but seem at a loss as to how to understand or deal with the issues facing their charges, and can do little more than bark at them or implore them vaguely to behave. Thus, these youths are left to their own devices, and it's no surprise that the result is a mess of vandalism, hurt emotions and mental scars. As we've previously mentioned, the experiences on show within Flowers of Evil are unlike those most of us will ever have been party to, yet dig below the surface of the shocking events they depict and the series offers up a universal truth about adolescents - a group with so many thoughts and desires, and absolutely no idea how to relay them to others or act upon them.

Having mentioned the rotoscoping treatment afforded the series, it should be noted that stylistic choice has proved off-putting to many - certainly, this isn't what you'd call a good-looking show, and although it avoids some of the pitfalls of other rotoscoped efforts it has plenty of issues of its own. However, in our opinion this decision pays dividends in achieving the goals set out by Flowers of Evil's story, giving the mundane an alien or even sinister air throughout, and effectively giving us a glimpse of the world through Kasuga's eyes - wide, empty streets becoming suffocating and oppressive, and anyone outside of our direct line of sight becomes a faceless, almost unrecognisable being that could never hope to comprehend or communicate with our protagonist.

If the visuals do much of the heavy lifting for setting up the atmosphere of Flowers of Evil, it's the shows soundtrack that pushes it over the line. Put simply, the music for the series is phenomenal, accentuating those sinister overtones we spoke of markedly as it drones threateningly over the shots of quiet streets and run-down buildings or shots of the cast fumbling their way through another awkward teenage interaction. Coupled with the passionate performances across the show's Japanese cast (there's no English dub here, as you might expect), this might not be a series that's easy on the eye or ear, but then again nor should it be. This is where we should mention that this release is DVD-only - the lack of a Blu-ray edition is a shame, certainly, but not an inherent disadvantage in the case of this specific show which looks plenty good enough across its three shiny discs and is well-presented in terms of video and subtitle quality.

A masterclass of direction and presentation it might well be, but Flowers of Evil isn't flawless - it occasionally lingers for far too long on certain scenes to the point where it loses all efficacy, and the ending to the series is a mess as it tries to cram in a cornucopia of future events as if to tease a second season that seems unlikely to ever see the light of day. The ending in particular is galling, as an unsatisfying end to an incredible series that deserves far better.

Forgive it that misstep however, and Flowers of Evil is as superb as it is unique - a far cry from the happy, rose-tinted view of school life present in many anime and a show that is often genuinely uncomfortable to watch but all the better for it. As a viewer whose teenage years are now long gone, the viewing experience is personally altered by the surfacing of embarrassing past memories and an adult's view on the unfolding proceedings that leads to you realising that Kasuga could have saved himself in numerous ways if only he'd had the life experiences and wisdom of age to do so. This is perhaps the most important point to make about the series - your ability to connect with it will be broadly based upon your own past experiences, so it may not have the same impact for everyone, but I suspect everyone has known (or been) a Kasuga; a Saeki; a Nakamura, in their own pasts.

If nothing else, this adaptation of Flowers of Evil is a shining example of how to create atmosphere in a series - with shot composition, with visuals and with sound. This considered attempt to bring out the strengths of the source material works indescribably well, and coupled with the strength of that original story the result is one of 2015's must-see releases, especially if you're hungry for something darkly different from the norms of anime fare.

Japanese stereo with English subtitles. There are no extras on this release.

9
The most atmospheric series you'll watch this year, and a darkly enjoyable story of adolescent misadventure that will resonate with most viewers.
COMMENT AND DISCUSS
blog comments powered by Disqus