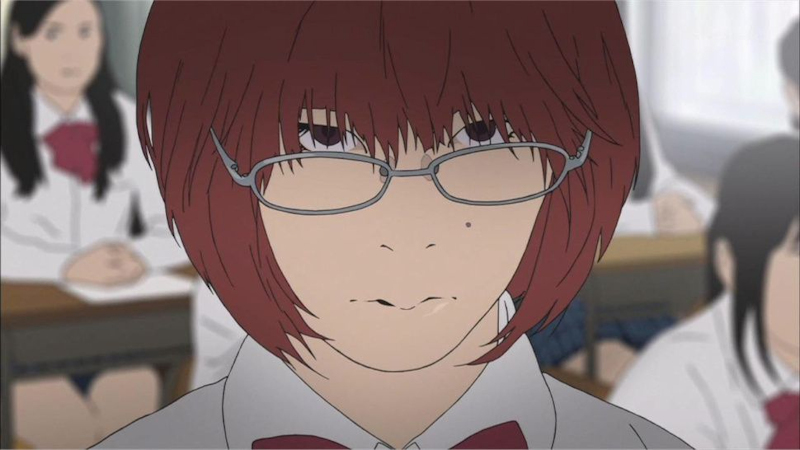 Of all the shows airing as part of the new season, Flowers of Evil is proving to be one of the most controversial and divisive of them all, with both Japanese and Western fans clashing over almost every aspect of the show. It’s certainly true that Studio Zexcs have taken some fairly big risks in this adaptation of Shuzo Oshimi’s critically acclaimed manga. But will they pay off in the end?

First of all, it’s important to note that whilst the series draws some inspiration from and does reference the titatular book of poetry by Charles Baudelaire, it’s certainly not required reading; nor do you need to be at all familiar with the work as the book isn’t adapted here in any noticeable way. Instead the focus of our story is Takao Kasuga, a young student with a love of obscure foreign books and poetry. To his classmates he’s pretty much average in every way, with friends who stick around and an unrequited crush on Nanako Saeki, the cute girl in his class.

Unfortunately things are about to go very wrong for Takao after he finds himself alone in the classroom along with Nanako’s PE kit, which he ends up stealing. This leaves him absolutely mortified with guilt and terrified that he will be identified as the pervert his class now think stole the uniform. This is made even worse when the class loner Sawa Nakamura reveals that she knows what he’s done, suggesting that if he doesn’t want her to tell anyone then he’d better do exactly as she says. The result is a strange blend of ordinary and bizarre semi-fetishistic encounters between the two, as Takao desperately tries to keep her quiet and find a way to come clean or get out of the hole he’s ended up in.

As stories go it sounds a little more normal that it actually proves to be. This is entirely due to the wonderfully deep and twisted characters the series presents as its two leads - Takao is utterly tormented at every turn by the possible consequences of what he’s done but the series makes you almost pity him rather than make it comedic as most other series would. Nakamura too is brilliantly drawn, pulling such drastic character switches every so often that you’d almost worry that the series didn’t quite know what it was doing if it didn’t just fit in so well, particularly given that all the events in the story are told through the filter of Takao’s paranoid terror of her. Other characters are thus far undeveloped but with two such strong leads this isn’t really a problem at this point, and we’re even distracted from the fact that there’s very little in the way of an overarching plot to the story.

The sound design also deserves mention here, as every sound effect and piece of music serves to build up more and more tension throughout the first episode and then in later episodes help to create a moody, almost oppressive atmosphere that perfectly matches Takao’s state of mind as the on-screen action occurs.

So, with great sound and characters there can only be one place left to find the true heart of why this series is drawing so much attention then – the visuals. Flowers of Evil is actually almost completely created using rotoscoping (for the less film-savvy this means that actors are shot in live action and then animators draw over the top of the frames). The result is certainly unusual when you first look at it - everything that moves seems to move too smoothly and as a result it becomes more noticeable when characters in the back of shots aren’t moving than it would be in more traditionally styled anime. It also gives a somewhat unique look to the characters, who have much less detail than we’ve come to expect and the more solid blocks of colour feel like you’re looking at the wrong side of a cell of traditional animation. Another interesting thing about this is that it means there’s a good chance that the home release could come with a ready-made live-action version of the series! Some fans, particularly in Japan, are also upset that the character designs in a lot of cases vastly differ from those of the original manga (I could also be mean and say it’s because all the female characters have realistic body-types and there’s no real fan-service potential) as a result of the rotoscoping process. Everyone seems to have a strong reaction to how this all plays out on-screen, though personally whilst I’ll freely admit there doesn’t seem any reason why the studio chose this method (they’re much better known for more traditionally styled works), I actually really like the way it looks and it’s giving the series a unique hook which has drawn a lot of attention to a series that could well have slipped under everyone’s radar otherwise.

I honestly can’t wait to see more of this series to see if it can continue to build on everything it’s done so far. For all the possible reasons people might not like it, its undeniable that it tells a compelling story and it should be praised for choosing to take the risks that it did just as other shows have done before it. This is absolutely one of the best shows to watch this season so far, and I whole-heartedly recommend everyone check it out!

You can currently watch Flowers of Evil in streaming form via Crunchyroll.

9
Never mind the controversy, sometimes a risk is worth taking.
COMMENT AND DISCUSS
blog comments powered by Disqus